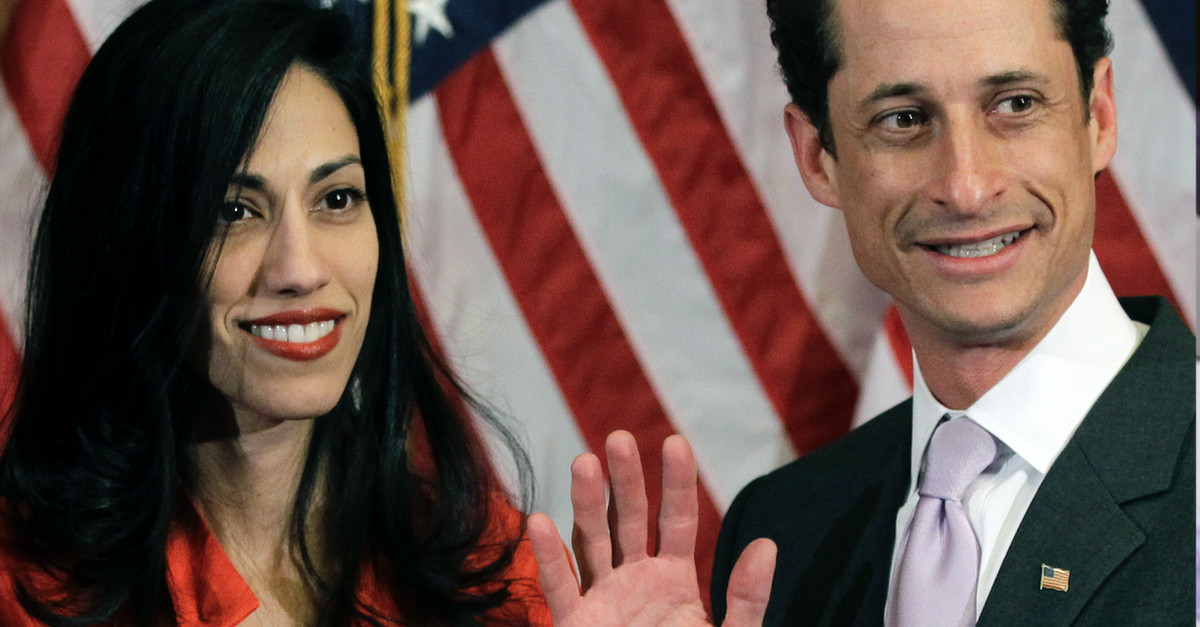 (AP Photo/Charles Dharapak, File)
FILE - In this Jan. 5, 2011, file photo, Anthony Weiner and his wife Huma Abedin pose for photographs after the ceremonial swearing in of the 112th Congress on Capitol Hill in Washington. Abedin, who was notably absent five months later when Weiner resigned his congressional seat and admitted sending lewd Twitter photos to women, has been a key player in his surging mayoral run. She’s appeared in his campaign launch video, raised tens of thousands of dollars and joined him on the campaign trail. (AP Photo/Charles Dharapak, File)

Former Clinton aide Huma Abedin’s marriage to disgraced congressman Anthony Weiner took an unexpected turn on Wednesday with reports that the pair withdrew their divorce proceedings, per a Page Six report, though later reports noted that Abedin and Weiner are simply settling out of court.

RELATED: A woman missed her mother?s funeral ? police claim she was busy robbing the deceased?s house

Abedin’s attorneys appeared in a Manhattan courtroom on Wednesday and submitted paperwork, signed by both Abedin and Weiner, that agreed to end the case. Weiner has been in prison since November, serving a 21-month-long sentence for sexting a 15-year-old girl. In response to the filings, the judge announced that the case was “discontinued.” Weiner and Abedin’s relationship has been on the rocks for years as his tenure as a congressman was tanked by a previous sexting scandal. In August, Abedin announced that she was separating from Weiner.

Page Six’s initial report suggested that the pair may be reuniting, but an attorney for Abedin later clarified to Politico’s Annie Karni that they will be settling out of court.

CLARIFICATION. In a statement just provided to me, Abedin's lawyer says: "In order to reduce any impact of these proceedings on their child, the parties have decided to attempt to reach a settlement swiftly and privately." https://t.co/wV8VZnLf3l

Abedin was a top aide to Hillary Clinton during the 2016 election and emails traced to Anthony Weiner’s laptop led to James Comey opening an FBI investigation into Clinton. When she heard about the new investigation, Abedin reportedly burst into tears. In her book, “What Happened,” Clinton wrote that Abedin cried “this man is going to be the death of me.”

The former Clinton aide popped back into the spotlight on January 2, when Trump tweeted that she “has been accused of disregarding protocols” and called for an investigation into her.

The New York Daily News notes that matrimonial cases are sealed, thus it’s impossible for us to know the exact details of their divorce.