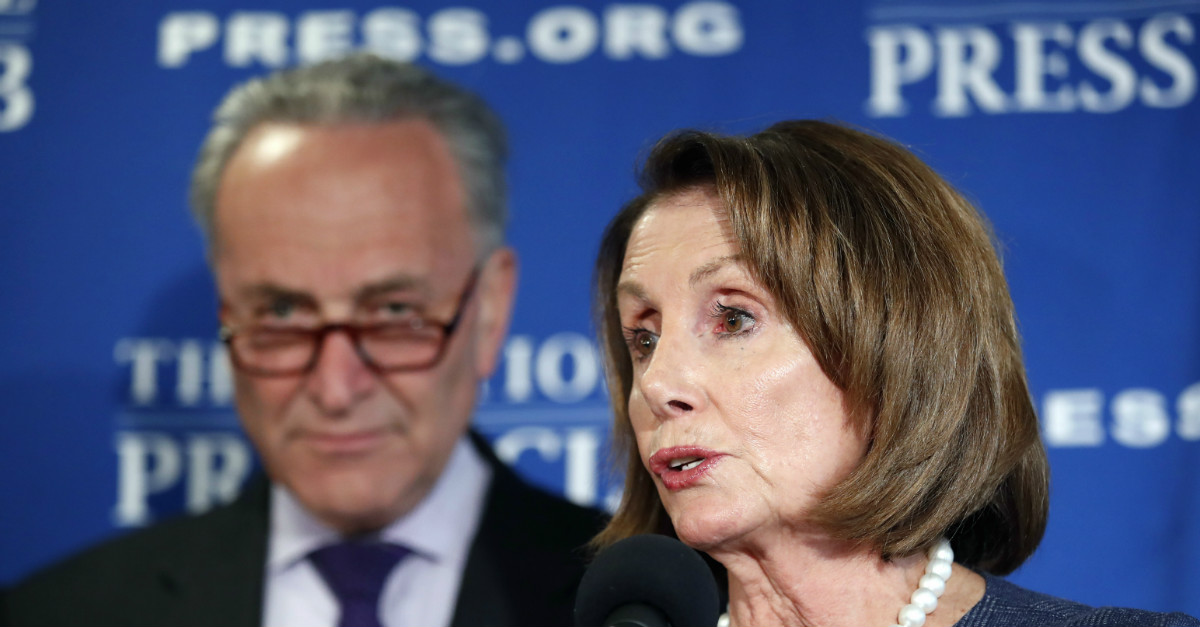 There’s no way around it: President Donald Trump’s press conference in Trump Tower on Tuesday was a complete and utter disgrace. His condemnation the day before of the KKK, white supremacists, white nationalists, neo-Nazis and all the other miscreants who participated in the hate-fueled violence in Charlottesville was wiped out as soon as he opened his mouth about the “alt-left” protesters. Chief of Staff John Kelly’s face said it all; one imagined he was shocked and furious as his boss stood there ad-libbing and digging his own grave. White House officials who were willing to chat anonymously spoke of a president who “doesn’t care” about the consequences of his remarks.

But Trump’s political opponents, including liberal Democrats in the House of Representatives, aren’t doing themselves any favors by once again bringing up the prospect of impeachment. Two more Democratic lawmakers jumped on that train after Tuesday’s terrible press conference, with California Congresswoman Jackie Speier openly stating that Trump no longer possesses the mental capacity to hold the highest office in the land. Others are asking both Special Counsel Robert Mueller and Congress to save the country by uncovering Trump’s crimes and corruption. Hopefully, their theory goes, the mix of investigations and Trump’s continuing strange antics will convince the Republican Party to deprive Trump of the nomination in 2020.

RELATED: Why asking “What about antifa?” is not a good response to white nationalism

We can debate all day and all night whether Trump still has his wits about him. Much of his behavior since he’s been in office has frankly been strange and unbecoming of a commander-in-chief. We’ve all written some version of this statement after a controversial comment that he’s made, but it’s worth saying again: the man is so egotistical, so proud of himself, so damned stubborn and at times so delusional in his interpretation of the facts that you can’t help wondering whether he’s walking off the reservation. I’m not a psychologist or a psychiatrist, so I’m not going to offer a diagnosis, but even a layman can see that there’s something seriously wrong with this man. You would have to suffer from acute tunnel-vision — like Jeffrey Lord, Kellyanne Conway and Sarah Huckabee Sanders — to not see it.

Buried underneath all of the noise, however, is a lesson that Democrats should take to heart: when your political enemy’s public approval ratings are in free-fall, and when that person can’t help but make more problems for himself, it’s best to watch from the sidelines without piling on.

RELATED: There were no “fine people” on the white nationalist side of the Charlottesville clash

The progressive base of the Democratic Party would love its lawmakers to talk more about impeachment and the invocation of the 25th Amendment. But the country’s history and the parliamentary mechanics of actually making that happen are so byzantine that it’s almost silly to bring it up. It’s a big reason Democrats who have been around Washington for a long time, like Chuck Schumer, Nancy Pelosi and Steny Hoyer, would rather their members talk about infrastructure investment and saving health care. Presidential impeachment and conviction has never happened in the 241 years that the United States has been a country. Democrats may like to dream of this scenario becoming a reality, but it’s just that: a dream that won’t come true absent a high crime so serious that even congressional Republicans wouldn’t be able to explain it away.

The Trump White House is currently in the middle of one of its worst weeks, coming off another week that involved the president threatening Kim Jong-un with “fire and fury” and a public assertion that a U.S. military option is on the table to avert a civil war in Venezuela. The Democratic Party can either watch this self-destruction from the sidelines, or it can get involved and risk giving Trump and his camp of loyal supporters the talking point that this entire affair is an orchestrated campaign by the Democrats and George Soros to destroy a Republican presidency. Which option would be the better play? I think it’s clear.