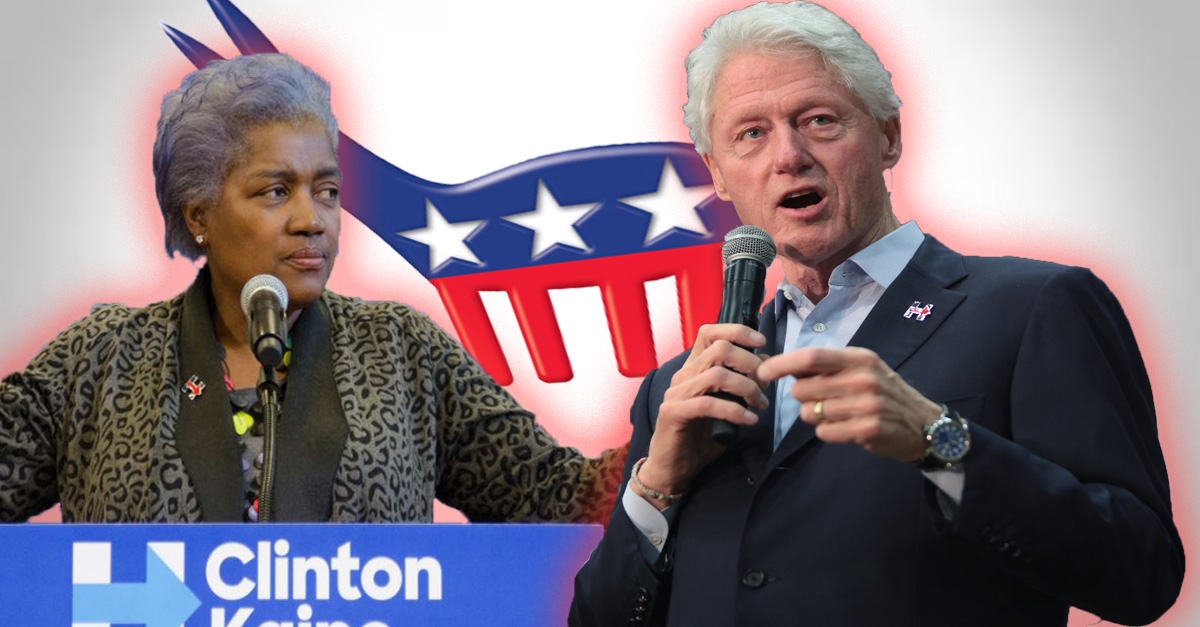 Former DNC leader Donna Brazile acknowledged that Bill Clinton paid dearly for the Monica Lewinsky scandal; but when asked, she said that the former president should “absolutely” campaign for democratic candidates running in the 2018 midterm elections.

RARE OPINION: Liberals shouldn?t be shocked by the defenses of Roy Moore, because it?s how they defended Bill Clinton

On Tuesday, Brazile appeared at Politics & Prose, a popular bookstore in Washington D.C. where she was discussing her new book “Hacks: The Inside Story of the Break-ins and Breakdowns That Put Donald Trump in the White House.” When freelance reporter Nicholas Ballasy asked her if Bill Clinton should hit the campaign trail in 2018, she gave the following response, per The Intercept:

Absolutely, no doubt, and let me tell you something; I worked for Bill Clinton and Al Gore, OK, part of my formative years. Bill Clinton was impeached. In 1998, I went over to the DNC, I left my job with Eleanor Holmes Norton and Dick Gephardt to go over to the Democratic Senatorial Campaign Committee and the DNC, and we came within five seats of taking the House. Bill Clinton paid a huge price and I know everybody wants to re-litigate it today and rather than talk about Roy Moore, a man who has been banned from the mall and not want to talk about sexual harassment ? sexual harassment is a pervasive problem in our society and the workplace.

Brazile’s book, which is essentially a memoir of the 2016 election, has been widely discussed by Democratic strategists and many were infuriated by what she wrote. In the piece, she characterizes the Clinton campaign as mismanaged and even says that she considered pulling Hillary out of her candidacy and replacing the secretary of state with Joe Biden.

Former DNC chairman Ed Rendell told Politico “the timing [of the book’s release] couldn’t have been worse. It does us no good to hash out all this stuff. At this point, we should be looking to the future. What’s done is done.” The book even earned a Trump tweet, in which he claimed that “crooked Hillary bought the DNC & then stole the Democratic Primary.”

The real story on Collusion is in Donna B's new book. Crooked Hillary bought the DNC & then stole the Democratic Primary from Crazy Bernie!

In her Tuesday appearance, Brazile also applauded Bill Clinton’s recent work, saying “I am proud that Bill Clinton has continued his service. He’s not perfect. I’m not perfect.” She also claimed that the Clintons have helped the party as a whole, saying they “have been extremely effective in helping the Democratic party recruit the next generation of candidates and much more. We need Bernie Sanders out there. We need Hillary Clinton out there. We need Joe Biden out there.”

In response to the backlash from Democrats about her book, she wrote said “I know that some of you have probably read the excerpts and it worked you up, and that’s a good thing because if you’re not worked up about 2016, then I don’t know what you are waiting for in terms of the future. I’m still worked up about what happened in 2016.”

Since sexual harassment has dominated the news cycle for the past few weeks, many Democrats have been taking a second look at Bill Clinton’s time in the Oval Office. On Tuesday, the Wall Street Journal’s editorial page declared that “the left changes its mind on Bill Clinton.” Last week, The Atlantic stated “feminists saved the 42nd president of the United States in the 1990s. They were on the wrong side of history; is it finally time to make things right?”