Hillary Clinton’s book tour: Another exercise in blaming everyone but herself 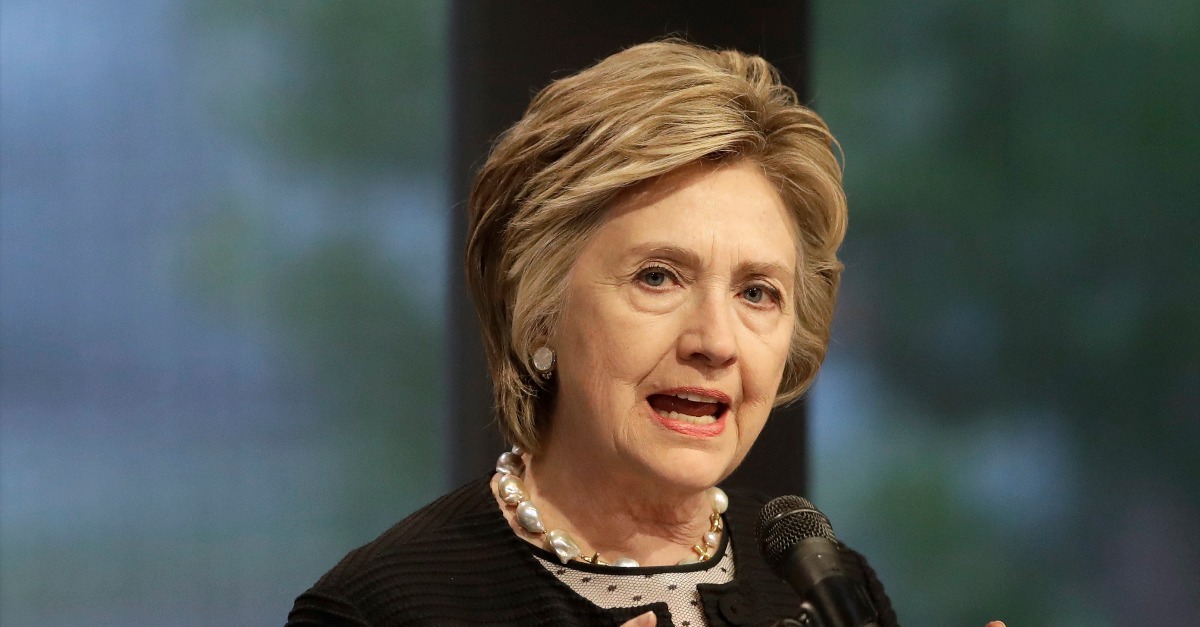 AP Photo/Patrick Semansky
In this June 5, 2017 file photo, former Secretary of State Hillary Clinton speaks in Baltimore. Clinton lost the 2016 election to President Donald Trump, but some Republicans in Congress are intensifying their calls to investigate her and other Obama administration officials. (AP Photo/Patrick Semansky, File)

Hillary Clinton is finally ready to explain what happened. But in typical Clinton fashion, it will cost you to be graced by her presence. If you?re willing to pay anywhere from $150 to $2,400 for tickets, you too will have the privilege of hearing her proffer more excuses as to why she lost the 2016 election to Donald Trump.

Clinton is hitting the road to talk about her latest memoir ?What Happened,? including a stop in Wisconsin (finally). And after leaving her supporters high and dry on election night while everyone watched Trump win the election, the twice-failed presidential candidate still cannot accept responsibility for her own loss.

We know, she won the popular vote. But that?s not how this works.

While the book won?t officially be released until Sept. 10, several excerpts have been released through promotional advertising. Because if there?s anything Clinton is great at, it?s getting people excited.

“What you’ll see will be her story — live. Her story of resilience, how to get back up after a loss and how we can all look ahead,” her publishing company, Simon & Shuster says. Even the promotional material portrays Clinton as a victim: ?She speaks about the challenges of being a strong woman in the public eye, the criticism over her voice, age, and appearance, and the double standard confronting women in politics.?

?She lays out how the 2016 election was marked by an unprecedented assault on our democracy by a foreign adversary. By analyzing the evidence and connecting the dots, Hillary shows just how dangerous the forces were that shaped the outcome,? the statement says.

Again, are we to believe Russia forced Clinton to not campaign in major swing states? Did Putin make her declare that half of the American electorate belonged in a basket of deplorables?

Trump?s detractors have a fair point when they say the election was nearly a year ago and it?s time for him to move past his victory. So why is Clinton immune to such advice? She continues to assert that Russia stole an election from her, despite no substantial evidence to corroborate that claim.

Clinton has made it clear she isn?t going anywhere and plans to join the “resistance” against Trump. If you?re a Republican, that is great news.

GOP candidates have won congressional special elections in Georgia, South Carolina, Kansas and Montana since Trump took office in January. Those losing efforts costs Democrats a collective $35 million. They’re not going to improve that record by giving the public another blast from the past.

Like it or not, Clinton will remain a powerful voice in politics after more than 30 years of service. It would be nice to see the former Democratic nominee encourage leftist groups, the media and members of Congress to work with the president where possible rather than opposing every action he takes. We had an election and he won. The electorate has spoken and it?s time to listen.