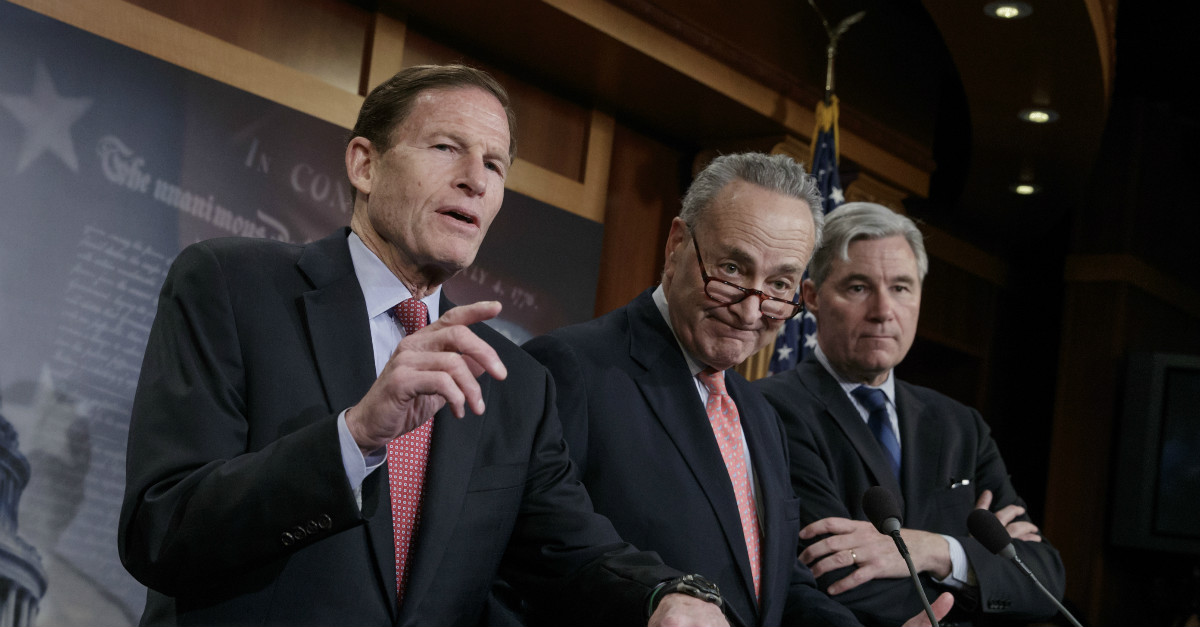 Get out the launch codes – the Senate may soon be going nuclear. As of Monday afternoon, Senate Democrats secured the 41 votes necessary to block the confirmation of Judge Neil Gorsuch to the Supreme Court. The situation deteriorated quickly over the weekend when Missouri Senator Claire McCaskill became yet another red-state Democrat to voice support for filibustering Donald Trump’s Supreme Court nominee, accusing the soft-spoken Gorsuch of a “stunning lack of humanity” in his judicial decision-making. Interestingly, McCaskill’s decision came just days after audio surfaced of her warning left-wing donors that blocking Gorsuch could lead to dire long-term consequences.

She has reason to be concerned. With the Gorsuch nomination stalled, Majority Leader Mitch McConnell will argue – correctly – that no Trump nominee can get a fair shake under the current rules. Given Gorsuch’s obvious qualifications and high public approval, McConnell has enormous leverage among his own conference to adopt the so-called “nuclear option,” ending the filibuster for Supreme Court nominees. Forcing Republicans to nuke the filibuster is an exceedingly stupid play for Senate Democrats, a reality McCaskill seems to acknowledge in the recording.

Obviously, replacing the late Justice Antonin Scalia with another conservative will have little impact on the court’s ideological balance. It would merely be a “Scalia for Scalia” trade-off, as McCaskill herself put it. Most crucially for the Democratic faithful, Roe v. Wade wouldn’t be immediately jeopardized. Democrats would therefore be quite foolish to waste any political capital in a no-win situation.

“Hold on now,” a liberal reader might say. “Even if Democrats had let Gorsuch through, what’s stopping McConnell from simply going nuclear if we oppose the next Trump nominee?” Fair point. But let’s take a moment to consider what the political landscape might look like the next time there’s a Supreme Court vacancy.

RELATED: It takes talent to be as bad at politics as Senate Democrats

First off, odds are very good that the next open seat will come following the death or retirement of a left-leaning justice. Ruth Bader Ginsburg and Anthony Kennedy are already in their eighties with Stephen Breyer not far behind at 78. You could gamble that all of them survive four years of Donald Trump (Lord knows, Ginsburg will try) but should the president win a second term (don’t rule it out), the odds of another court vacancy under his watch approaches near-certainty. Furthermore, Democrats can’t count on winning back the Senate anytime soon, having blown their best opportunity in 2016. The 2018 Senate map suggests, if anything, that Republicans will expand their majority.

So here we are in 2019. It’s year three of Trump’s presidency. Republicans underperform in the midterms but keep their current 52 seats. Gorsuch is a reliable member of the Court’s conservative wing but Kennedy remains the tie-breaking vote on controversial issues. Suddenly, Justice Breyer decides he’s had enough and wishes to spend his remaining days indulging his lifelong passion of model ship building (or whatever). It then falls on Trump to select another jurist from his now-famous campaign list. He goes bold, tapping arch-conservative Bill Pryor from the Eleventh Circuit.

Pryor’s confirmation would represent a generational shift for the Court, endangering all kinds of liberal sacraments, particularly Roe. Naturally, all Democrats are opposed, including West Virginia’s Joe Manchin, who narrowly won reelection in 2018. Pro-choice Republicans like Susan Collins and Lisa Murkowski also buck their party, demanding a more “mainstream” nominee from the president. The hearings are brutal but ultimately Pryor wins confirmation after Vice President Pence breaks a 50-50 Senate tie. Democrats are screwed.

Imagine, however, a saner Democratic party, unmoored from its base and less beholden to the so-called #resistance. In this universe, Democrats still hammer Republicans for undercutting Judge Merrick Garland but agree to take the high road, offering Gorsuch a floor vote. 2019 rolls around and once again, Breyer hangs up his black robe and rides off into the sunset. Trump again nominates Pryor, igniting a firestorm from liberal activists. In this world, Democrats can and do invoke the filibuster and deny Pryor a simple majority vote. McConnell calls for the nuclear option but this time can’t count on Murkowski or Collins for support. Democrats point to the Gorsuch vote as evidence of their willingness to confirm Trump nominees so long as they are sufficiently mainstream. Senate traditionalist Lindsey Graham buys the argument. So long as it’s not being abused, he prefers to see the institution intact. He votes “no” on the nuclear option.

RELATED: The filibuster is worth protecting from Chuck Schumer

Our incredulous liberal reader would probably interject here: “Give me a break. McConnell will find the votes. Plus, you said yourself that Republicans will probably gain even more seats next year. Even if we agree to Gorsuch, they’ll still roll us on Pryor or whatever fascist Trump picks next.” While I don’t agree with our reader’s flippancy, he’s possibly correct on that outcome. But my point, I think, still remains valid. There is no realistic pathway for Democrats to stop Gorsuch. He will be confirmed, one way or the other. However, by forcing McConnell’s hand now, they allow the Republicans to change the rule under politically favorable circumstances. Chances are Trump will get a second pick with even higher stakes in the near future. With the filibuster intact, liberals at least have a degree of leverage. Even if they fail, Republicans would take a bigger political hit nuking the filibuster under those conditions than they would now.

McCaskill, like many of her colleagues, understands the situation well. The fact that she’s decided to embrace this absurd suicide mission against Gorsuch – who outside a Senate hearing room generates all the controversy of a warm glass of milk – represents a telling calculation on how she views the party’s base. Any cooperation with Republicans, and Trump in particular, is viewed as nothing short of treasonous, regardless of the long-term consequences. Forgotten is Michael Corleone’s useful maxim: Never hate your enemies; it affects your judgment.

Although conservatives will and should view Gorsuch’s confirmation as a great moment for the Republic, the day should not pass without a moment of somberness. The nuclear option, however necessary it might be in this instance, will represent the further decay of a procedure that’s helped guide lawmaking in this country for more than a century and a half. It also suggests that one day, perhaps very soon, the device will be eliminated for all legislation, ushering in a new era of hyper-activity from Congress. This may come as welcome news to those frustrated by Washington’s perceived inability to “get things done.” But for classical liberals, skeptical of the size and scope of government, it signals something else entirely. Neil Gorsuch’s seat on the Supreme Court might be assured, but there is still much at stake this week.