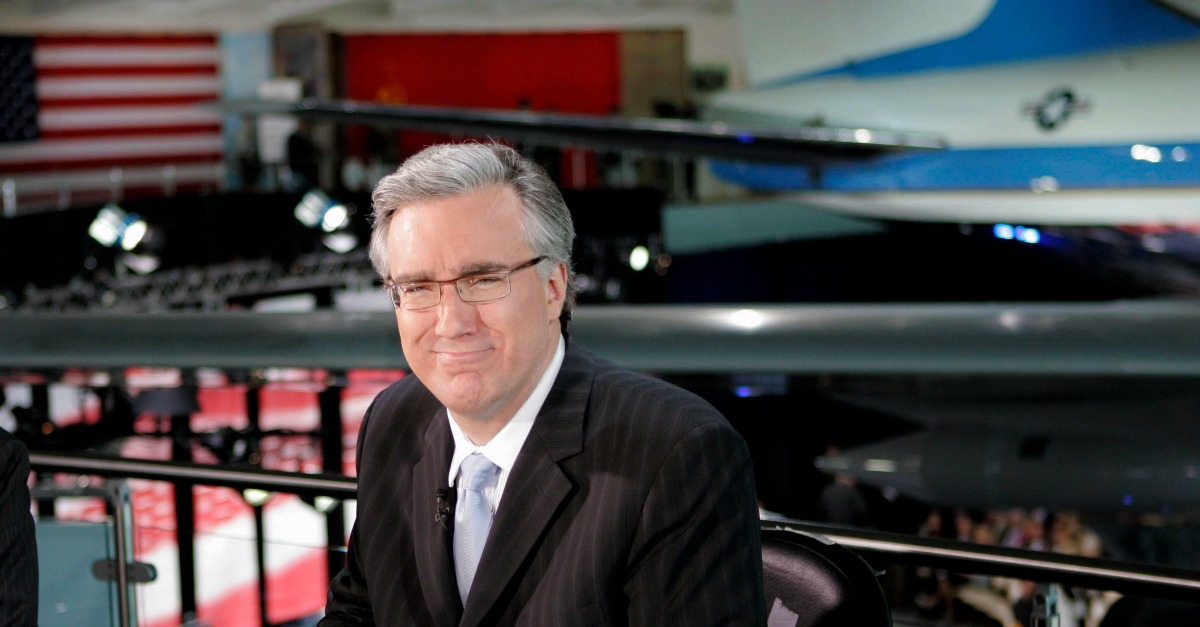 Reeling from the aftermath of Hillary Clinton’s devastating defeat and Donald Trump’s ascendance to the presidency, the rhetoric of liberal wags has become more virulent and vitriolic in recent months. It’s becoming a real problem. You can’t take anyone seriously when he’s constantly comparing his ideological opponents to Hitler.

There’s no better example of this than Keith Olbermann.

For years, Olbermann espoused his particular brand of mouth-frothing liberalism at MSNBC. After years of saying that conservatives were “urinating on the Constitution” and telling President George W. Bush to “shut the hell up,” he was ousted in 2011. Now Olbermann has been given a platform again over at GQ, where he regularly lambasts Republicans and advocates for anti-Trump “resistance.” His Hitler, Nazi Germany and World War II comparisons continue apace.

And never were four minutes so strained to contain so much hyperbole as in his latest GQ video. In it, Olbermann manages to say that Donald Trump’s administration looks like a “bomb disposal operation” and that the Republican party “owns the bomb” for which the GOP will be forever “damned in history.”

Let the outrageous historical analogies commence! Donald Trump’s mental state is “beyond Nixon,” “beyond Woodrow Wilson after his paralyzing stroke,” “he’s beyond the afflicted King George.” The best comparison Olbermann can think of for Trump is Emperor Nero fiddling during Rome’s burning.

This is where Olbermann’s hyperbole really heats up. Because Republicans do not invoke the 25th Amendment to remove Trump from office, Olbermann says they are like appeasers within Britain who failed to recognize the threat of Hitler and whom Churchill said had “decided only to be undecided, resolved to be irresolute, adamant for drift, solid for fluidity, all-powerful to be impotent.” Not content to stop there, Olbermann then broke out a Ulysses S. Grant quote: “There are but two parties now, traitors and patriots.” Olbermann believes this dictum expressing Grant’s decision to join the Civil War is perfect for Republicans who won’t do what he thinks they should to oppose Trump.

“Republicans, you don’t hear the bomb ticking?” he fulminates. “To hell with you. Now you own the bomb, Republicans.”

There’s nothing new about this. Olbermann has always been a big fan of Hitler and Nazi comparisons. Back in 1998, he said special prosecutor Ken Starr looked similar “facially” to top Nazi propagandist Heinrich Himmler.

There’s a real risk for liberals who enjoy the use of such incendiary rhetoric — and it’s not just the risk of looking like an unstable loon.

These types of arguments are a formal logical fallacy known as Reductio ad Hitlerum. Those who use this in hope that by playing the Nazi/Hitler card, they will not have to respond to the truths of their opponent’s claim. They have, after all, just compared their opponent to history’s most despised figure. By constantly making comparisons to someone so bad and a situation so dire, they end up looking ridiculous.

It’s pretty preposterous to write these words down, but here it is: Trump’s tweets and the Republican response (or lack thereof) are really not the same as Nazi appeasers. None of this is just like being on the brink of the Civil War or living in Rome under the emperor Nero.

Liberals are naturally looking for a salve in the wake of Donald Trump’s victory over Hillary Clinton’s disastrous presidential campaign. That’s understandable and it’s what’s behind the rise of hyper-partisan sites like Occupy Democrats and a rash of popular new progressive blogs. But while more venting might satisfy the liberal id, the outrageous and spleen-busting responses of Keith Olbermann make them look desperately out-of-touch and over-the-top.