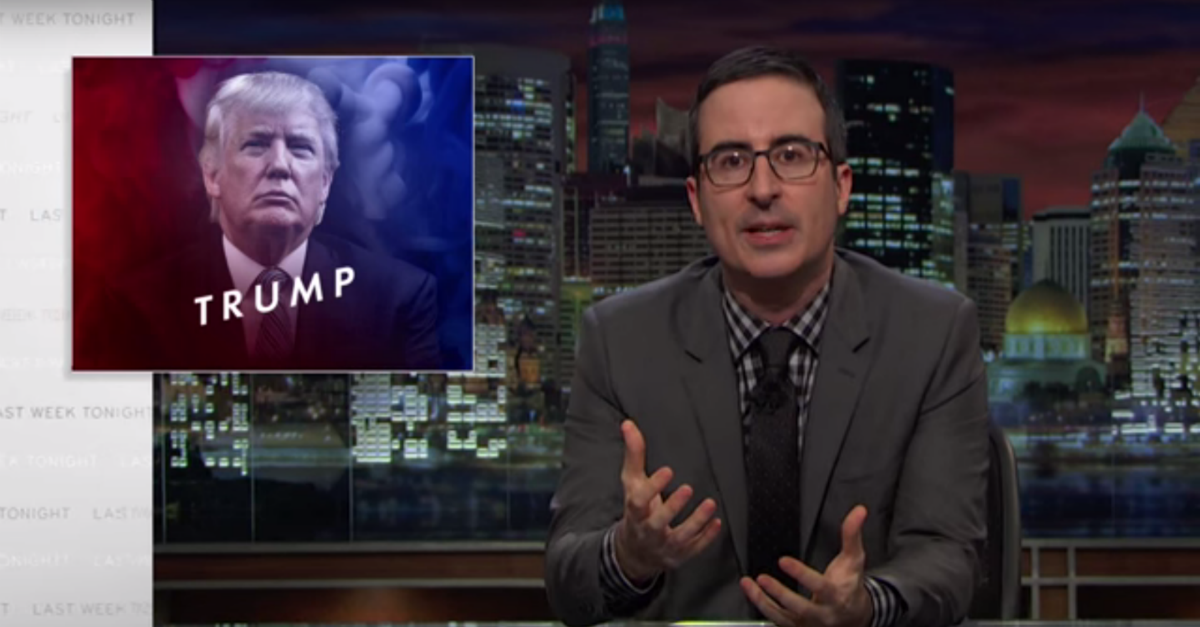 Conservatives are forever being accused by liberals of something called “epistemic closure”?meaning we’re trapped in a kind of intellectual feedback loop. Our critics have a point. Conservative journalists break a story, other outlets splash it across their front pages, pundits discuss it on Fox News, the Fox News videos are embedded by journalists, and so forth. It’s a great way to circumvent the left, but it can also turn into an echo chamber, where conservatives only ever end up reaching those who are already inside their media ecosystem.

But progressives shouldn’t be so smug on this point. The left has its own feedback loop, and the spokes are the many liberal-leaning comedy programs that have proliferated over the years, from the Daily Show to the Colbert Report to Last Week Tonight to Full Frontal. These shows claim they’re Speaking Truth to Power?, but the powers they seem to confront most are Fox News, the tea party, and socially conservative mega-churches, as opposed to, you know, actual elites. At The Atlantic, Adam Felder examines this problem in the context of John Oliver’s HBO show Last Week Tonight:

Hyperbolic headlines aside, the only people who tend to see issues or politicians being ?eviscerated? by Last Week Tonight are ideologically liberal. …

Look at Last Week Tonight?s ancestor, The Daily Show. Its viewers are more politically knowledgeable than most others. Further, its viewers also skew overwhelmingly liberal. Add in the fact that viewers of all ideologies tend to select media sources based on ideological leanings, and it becomes very difficult for any of these late-night segments?be they delivered by Oliver, Samantha Bee, or Trevor Noah?to reach anyone outside a predominantly liberal audience.

Thus, it?s not hard to imagine a scenario where the ?interest? created by late-night comedy is merely amplification within an echo chamber. The segments appeal to a liberal audience who may already know about the issue?or are otherwise likely to agree with the show?s position regardless.

That’s true and it speaks to the need for liberals to venture outside their ideological closets. How many times have you heard a lefty bashing Rush Limbaugh or Fox News, only for it to become abundantly clear that your paragon of open-mindedness has never actually listened to talk radio or watched Bill O’Reilly outside of the snippets played on other shows? Under the semiotics of left-wing comedy, a good chunk of conservative opinion is rendered invalid from the start, useful only as comedic cannon fodder. It’s the exact same thing that happens on the right, where tirades are issued against the “liberal media” from populists who haven’t actually watched CBS News in years.

The problem with opinionated comedy isn’t that it’s unfunny?Oliver frequently is and Stephen Colbert’s Comedy Central show could be laugh-out-loud hilarious. The problem is that its audience mistakes it for something it isn’t. Night after night, Jon Stewart’s repertoire was to play some clip from Fox News, ripped out of context and edited into a shambles, then cut back to himself wearing a countenance of extreme skepticism and make a smartass remark. Often, the audience would begin laughing before the punchline was even reached. They’d been trained to think people on Fox are monkeys and they were nothing if not obedient.

But as Felder points out, most gentle, independent voters don’t automatically assume that people on Fox are monkeys, which means Stewart usually ended up preaching only to the converted. Oliver, with his long expositions, is a bit better, though the core problem still manifests itself. And then away the jokes go, onto Slate and the Huffington Post with their sanguinary headlines (Oliver MUTILATES Donald Trump! Oliver CURBSTOMPS Sean Hannity!!), circulating through the Krebs Cycle and accomplishing nothing.

Snark isn’t serious argumentation and comedic therapy isn’t political engagement?something everyone in the political media (including the occasionally snarky yours truly) would be wise to remember. That doesn’t mean shutting off Oliver and becoming a humorless bore; it means accepting the limits of the late-night comedy format. Besides, the market has become saturated. The media needs more journalists, writers, novelists, philosophers, thinkers, interlocutors, and, yes, genuine satirists. Our jeering peanut gallery?that’s filled to capacity.