Why there will never be a liberal tea party 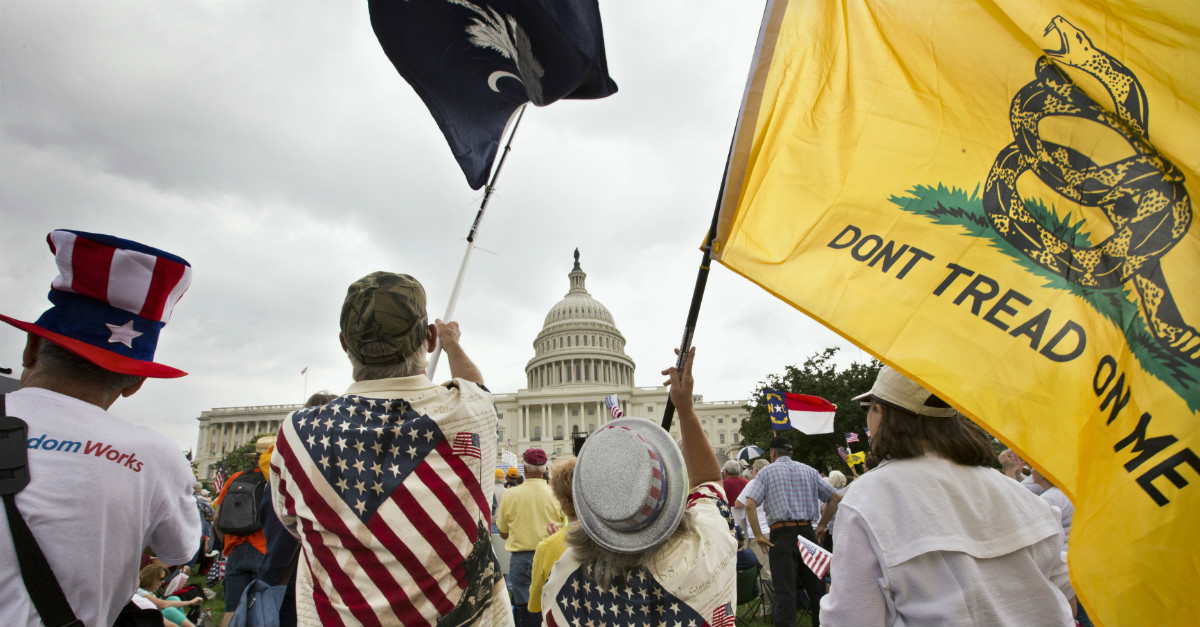 AP Photo/J. Scott Applewhite
In this June 19, 2013, file photo, Tea Party activists rallying in front of the U.S. Capitol in Washington. The movement’s top strategists concede the tea party is quieter today, by design. It has matured, they said, from a protest movement to a political movement. Large-scale rallies have given way to strategic letter-writing and phone-banking campaigns to push or oppose legislative agendas in Washington and state capitals. (AP Photo/J. Scott Applewhite, File)

That accusation is appropriated from Nancy Pelosi, who in 2009 described the nascent tea party movement as “astroturf by some of the wealthiest people in America.” Now, in a mirror image, protesters are once again popping up at town halls across the country to grill their elected leaders over Obamacare — only this time, they’re progressives opposed to the law’s repeal. Surely the former Democratic House speaker will haul out the astroturf again, right?

Of course not, because Pelosi is a hypocrite, but perhaps also because she knows she shouldn’t. Dismissing protesters of conviction as pliable tools of big money is a cheap cop-out, one Democrats dearly paid for when they lost the House and almost the Senate in 2010. The right would be wise to learn from this mistake, to engage with the demonstrators and try to assuage their concerns rather than reacting with complacent disdain.

But Republicans also shouldn’t panic. Despite the apparent symmetry, it’s unlikely these new protests will grow into the next tea party. Why? Blame the left’s lack of self-introspection.

The tea party’s ascent in 2009 came after years of quiet conservative fracture, as the many strands of right-of-center activism and thought — social conservatism, libertarianism, neoconservatism, right-wing populism, the Republican establishment — drifted apart like Pangea into its continents.

This wasn’t supposed to happen. The conservative movement’s success had been derived from its unity. During the 1950s, writer Frank Meyer presided over a shotgun marriage between the right’s traditionalist and small-government thinkers, dubbed “fusionism,” and it held uneasily for decades. Conservatives overlooked their differences in favor of fighting the greater enemy, liberalism, which in those earlier days was a largely unchallenged cultural juggernaut.

After the right gained power during the Reagan administration, it evolved from an insurgency into a governing philosophy, and the bridges over those intellectual fissures began to collapse. There were two especially consequential developments here. The first was the rise of “big-government conservatism,” as Fred Barnes called it, consisting of former Reagan hands who had been frustrated in their attempts to shrink the state and decided instead to commandeer it for their own purposes. The second was the right’s hawkish lurch after 9/11, supervised by neoconservative migrants from the Democratic Party into the GOP.

Both of these strands were intertwined during the Bush administration and both led to disaster: interminable war, massive debt, and ultimately electoral wilderness for the GOP. The tea party was meant as a corrective — to Obama Democrats, yes, but even more so to the discredited Republican establishment. Beneath all those tri-cornered hats was a sophisticated attempt to jettison what hadn’t worked and replace it with what hadn’t been tried, namely libertarianism and constitutionalism, which had been in hibernation on the right since Reagan. Tea party activists at that time sounded liberated. At last they could have a dialectic about how to move forward.

The left is now in a similar situation, clutching and reeling after an eight-year presidency that left the electorate so desperate for change that 46 percent of it voted for Donald Trump. The rubble of Barack Obama’s presidency smolders all around them. The stimulus yielded the most sluggish economic recovery since the Great Depression. Cash for Clunkers failed. The Obamacare exchanges are falling apart. The vast expansion of the regulatory state produced only greater inequality courtesy of an uneven economy that failed to touch millions of soon-to-be Trump voters. Wall Street boomed while the holler busted.

The left has shown no self-introspection over this, let alone a willingness to have a challenging intra-movement dialogue over how it needs to change. Instead, it remains married to ever-growing technocracy and unable to let go of its most repulsive component, the intolerant identity politics that alienated the white working class.

Democrats need more than a leftward lunge; they need to take out their own trash and start emphasizing what’s so great about liberalism. Their prudent Bush-era foreign policy would be a good place to start in this age of skepticism over overseas adventures. Instead they’re abandoning that at precisely the moment they shouldn’t, driven into lockstep with John McCain over Trump’s connections to Russia.

Resistance isn’t enough. Angry protests won’t suffice. You have to provide an alternative, one that’s more palatable than whatever you were selling before the voters wiped you out. That’s what the tea party tried to accomplish, and it’s what continues to elude the left.