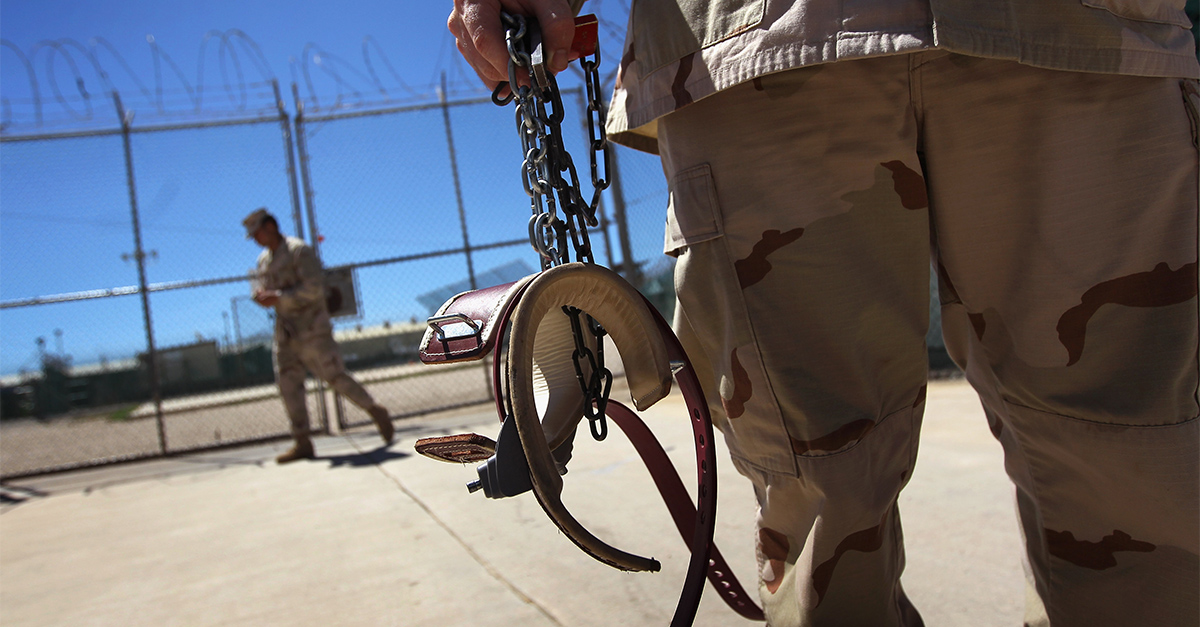 Photo by John Moore/Getty Images
GUANTANAMO BAY, CUBA - SEPTEMBER 16: (EDITORS NOTE: Image has been reviewed by the U.S. Military prior to transmission.) A U.S. military guard carries shackles before moving a detainee inside the U.S. detention center for "enemy combatants" on September 16, 2010 in Guantanamo Bay, Cuba. With attempts by the Obama administration to close the facility stalled, some 170 detainees remain at the detention center, which was opened by the Bush administration after the attacks of 9/11. The facility is run by Joint Task Force Guantanamo, located on the U.S. Naval Station at Guantanamo Bay on the southeastern coast of Cuba. (Photo by John Moore/Getty Images)

Early last month, I wrote at Rare about an unidentified American citizen who is being indefinitely detained by our government without his constitutional due process rights.

As I said then, we don’t know who this guy is or what he is believed to have done. The White House says he fought for the Islamic State, but we don’t know what evidence the administration has to support that claim or what role (militant? propagandist? online recruiter?) he is alleged to have performed. There’s some suggestion that he may have been an amateur journalist caught in the wrong place at the wrong time, but we don’t know if there’s any truth to that story, either.

Because this man’s identity has been kept secret, it has been nigh impossible for anyone to hold the government accountable on his behalf. Without knowing who he is, it is difficult to establish standing for legal action. And without legal action, who can compel Washington to reveal who he is?

But a Monday report from the Washington Post has some good news: This unnamed American’s case is finally getting a day in court. From the Post:

A federal judge Monday is set to home in on a question left open by federal courts since the struggles over detentions of suspected al-Qaeda members and other terrorists after the Sept. 11, 2001, attacks: how long can the government hold a U.S. citizen captured on the battlefield without letting him challenge his detention? […]

Some national security law experts have said that there is agreement the executive branch does not have unreviewable discretion to indefinitely detain U.S. citizens captured on a battlefield, but that the military has some leeway to make a decision. The key question is how long is too long, and who decides.

U.S. District Judge Tanya S. Chutkan of the District of Columbia is hearing the case, and her comments recorded in the Post story suggest she at least has a healthy skepticism of the government’s arguments to excuse its unconstitutional indefinite detention. When the Justice Department presented Chutkan with the legal standing objection I described above—that the ACLU can’t sue on his behalf because they don’t know who he is, information the DOJ won’t reveal without legal compulsion—the judge rightly condemned the “circularity” of this logic.

“That scenario” of giving the government permission to detain an American indefinitely without the accountability a court offers, “that kind of unchecked power, is, quite frankly, frightening,” Chutkan said.

She’s right. It is frightening.

Of course, these are unusual circumstances. This unnamed man was apparently caught in Syria, which suggests at least very poor judgment even if he has nothing to do with ISIS. This is not the same as you or me being scooped up out of our homes here in the States, and I’m not claiming it is.

Still, as I argued in my first post on this case, such messy, dramatic details make adherence to due process all the more important. The answer to scary things like terrorism is not, in Chutkan’s phrase, to permit Washington unchecked power. Whether this man is guilty or innocent, his case must be handled with all due respect for his rights and the rule of law.