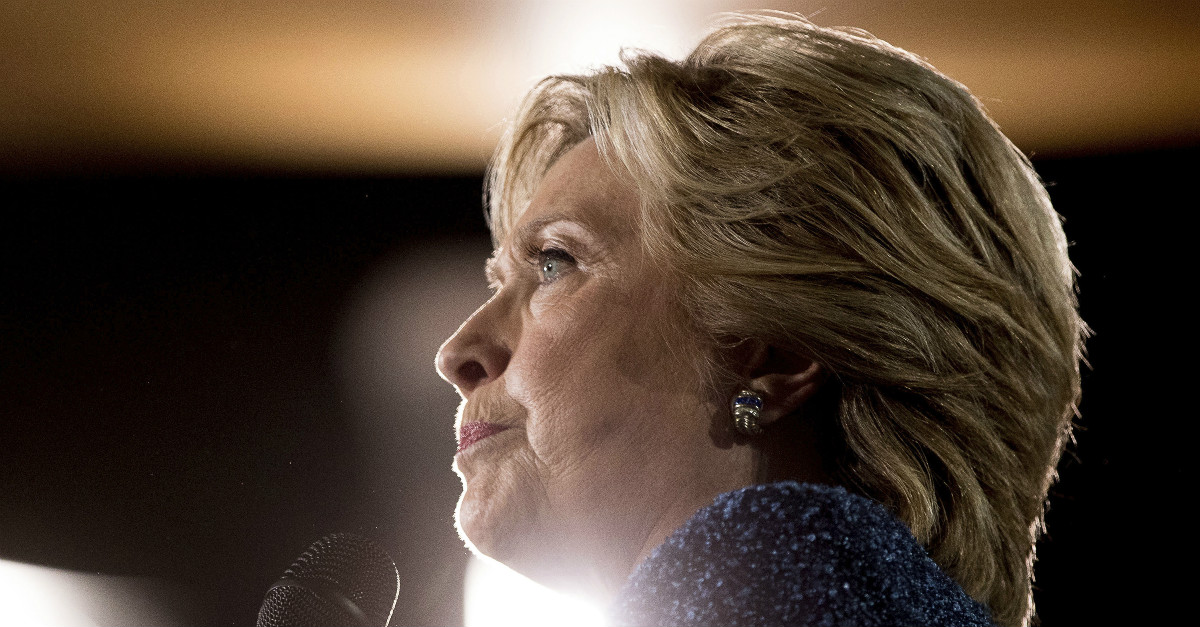 AP Photo/Andrew Harnik, File
FILE - In this Oct. 28, 2016, Democratic presidential candidate Hillary Clinton pauses while speaking at a rally in Des Moines, Iowa. A little more than a week from Election Day, Hillary Clinton has several ways to reach the 270 electoral votes needed to win the White House, while Donald Trump's path is perilous, at best. In fact, the billionaire Republican needs a dramatic rebound in states where the Democratic nominee appears to have the upper hand. (AP Photo/Andrew Harnik, File)

One of the more maddening aspects of the 2016 presidential election for those of us who had opposed the Iraq War and the Obama administration’s reckless interventions in Libya and Syria was that Democratic nominee Hillary Clinton was in many ways indistinguishable from the Bush/Cheney-style Republican hawks that progressives used to oppose. In fact, many of those same neoconservative architects of the 2003 Iraq debacle supported Clinton over Republican nominee Donald Trump.

Now, Boston University political science professor Douglas Kriner and University of Minnesota law professor Francis Shen have conducted a study that suggests, “Trump?s ability to connect with voters in communities exhausted by more than fifteen years of war may have been critically important to his narrow electoral victory.?

The Kansas City Star reported on the study in July:

Three swing states ? Pennsylvania, Wisconsin and Michigan ? all went to Trump by thin margins. They also all had a median number of casualties statewide, with about 25 casualties per million residents.

?Even after including all these demographic control variables,? the authors wrote, ?the relationship between a county?s casualty rate and Trump?s electoral performance remains positive and statistically significant.?

Kriner and Shen also noted in their study, comparing the 2016 and 2012 presidential elections, ?Trump significantly outperformed Romney in counties that shouldered a disproportionate share of the war burden in Iraq and Afghanistan.?

Romney’s foreign policy positions, also generally indistinguishable from Clinton’s, were seen as more hawkish than President Obama’s in the 2012 election (however untrue this perception might have been).

So, according to this study, those most touched by war seem to be tired of it. Not surprising. This recent study is but the latest in a long line of analyses that have concluded the same thing.

Unfortunately, Trump’s foreign policy rhetoric during the campaign has not matched with his policies as president. But it is telling that in states where the burden of war was felt more, swing states that could have feasibly gone — and were expected to go — to Clinton, that burden seemed to be a significant factor.

Significant enough, even, to cost Clinton the election. The problem is, I don’t think Democrats have learned this lesson.

Whereas Democrats once mocked Romney for daring to suggest that Russia posed a threat to the United States, the Dems’ current hysterical reactions to all-things-Trump have included taking foreign policy stances similar to those of hawkish Republicans. I once worried that a President Hillary Clinton would cement the Democrats as having an aggressive foreign policy outlook for years to come, but in some ways, this has happened anyway.

There was an antiwar voice on the left in 2016, but Bernie Sanders would eventually endorse Clinton, and in doing so, in my view, he undermined the potential to build principled progressive institutions similar to what antiwar libertarian Ron Paul accomplished on the right in the wake of his 2008 and 2012 presidential campaigns (Paul did not endorse Republican nominees McCain or Romney).

The 2003 antiwar left today is a distant memory.

Now if Donald Trump would actually live up to some of the foreign policy promises he made during the campaign, war-weary Americans could possibly get the relief many apparently voted for.