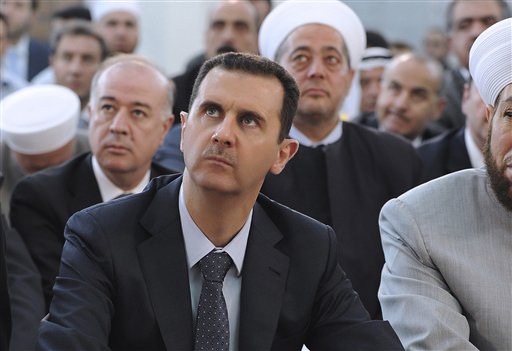 AP Photo/SANA
In this photo released by the Syrian official news agency SANA, Syrian president, Bashar Assad, performs Eid prayers in the Hamad Mosque in Damascus, Syria, Sunday, Aug. 19, 2012. Assad prayed early on Sunday at the start of Eid al-Fitr, a three-day holiday marking the end of the holy month of Ramadan. The last time he appeared in public was on Wednesday, July 4, 2012 when he gave a speech in parliament. (AP Photo/SANA)

There is a persistent American myth that war is a battle between good and evil; and good always triumphs. CNN’s fawning description of President Donald Trump’s comments regarding cruise missile attacks in Syria as, “one of the best speeches he has ever delivered,” is proof that the myth is alive and well.

We seem to have forgotten one of the most famous pronouncements from our own Civil War: General Sherman’s warning that “war is hell.” Instead, we see war as a black-and-white struggle where the good guys (that’s us) defeat the bad guys and liberate “the people” from oppressive tyranny. Rarely does real life match this superhero vs. villain scenario.

It’s this sad myth, in its thousands of iterations, that forced U.S. soldiers to ignore the sexual abuse and rape of little boys by Afghan police because the Afghans are our “allies.” Turns out, in Afghanistan, there really weren’t very many local “good guys” for us to ally with.

The myth is so pervasive that we’ve recast entire wars from history to fit it, including the only war that comes closest to fitting its caricature: World War II. Yet Winston Churchill, one of that conflict’s heroes who called for measures to be taken against Hitler long before the Allies fired any shots, said the war itself was “unnecessary.” Churchill wrote: “There never was a war more easy to stop than that which has just wrecked what was left of the world…”

It’s time for this unfortunate myth to end, and for cooler heads to prevail.

A sober analysis shows that there are a panoply of characters in Syria ranging in motivation from bad to worse, from President Bashar al-Assad, allied with President Vladimir Putin of Russia and accused of using sarin gas on his own people, to the group that stands to gain the most from his toppling, the horrific Islamic State.

There are several problems here that should give Trump administration officials pause before they continue escalating what could easily become another long-term American military commitment in the Middle East.

First, it’s still unclear what side used the chemical agents. Though Assad has used chemical weapons in the past, U.N. investigators also interviewed witnesses in 2013 who said Syrian rebels were responsible for using nerve gas against civilians.

In this most recent chemical attack, the worst in Syria in over four years, the Russians claim it was Assad’s enemies and not Syria that used the chemical agents, while UN official Matthew Rycroft said the attack “bears all the hallmarks of the Assad regime… There’s only one air force that has used such weapons in Syria.”

Meanwhile, a senior State Department official said Wednesday that they still have not ascertained that the chemical used in this attack was sarin. Syria continues to deny the use of any chemical weapons, saying it “has never used them, any time, anywhere, and will not do so in the future.” Former Republican presidential candidate Ron Paul pointed out that it makes little strategic sense for Syria to use chemical weapons when the regime knew it almost certainly would have drawn a harsh American response.

Trump now says that due to the gas attacks, “my attitude towards Syria and Assad has changed very much” and Vice President Mike Pence adds that “all options are on the table” when it comes to American involvement in ousting Assad.

But that brings us to the second problem with an intervention: does an entirely changed attitude on the conflict in Syria based on the use of nerve agents make sense? Whether that particular weapon was used in this scenario or not, Syria has suffered through one of the worst civil wars of the 21st century. Over 465,000 Syrians have died and a million have been injured. Over 12 million Syrians, half the country’s population, are homeless, which has triggered the world’s worst refugee crisis since World War II.

The use of nerve agents doesn’t somehow make those numbers more horrific. Why does sarin necessitate U.S. involvement when millions of displaced and dead Syrians did not?

The third problem is this: it follows that if the U.S. involves itself in toppling Assad, it will be provoking Assad’s ally Russia, and even if we could remove Assad while avoiding a conflict with Russia, those who stand to gain the most from Assad’s removal are Islamist rebels intent on establishing an Islamic State caliphate. The Islamists are so pervasive that an American program that trained and armed Syrians to fight ISIS under the Obama administration only produced a handful of recruits and many of the weapons paid for by American taxpayers ended up in the hands of jihadists. How would the U.S. stop the similar empowerment of extremists in the future, without an ongoing military commitment?

Fourth, the War Powers Resolution does not give the president the authority to launch offensive strikes against other countries without congressional approval. And yes, launching cruise missiles into Syria is an act of war. Congress has not authorized the use of military force since 2001 when President Bush asked for permission to fight al-Qaeda and the Taliban in Afghanistan, despite the many military strikes and invasions the U.S. has engaged in since.

Finally, as Trump embarks on what may be the most momentous decision of his presidency, it is worth reflecting on what his predecessor, President Barack Obama, called the worst mistake of his presidency: “failing to plan for the day after what I think was the right thing to do in intervening in Libya.”

Planning for “the day after” is key to winning a war. It’s something we failed to adequately or realistically do when George W. Bush invaded Afghanistan and Iraq. When America gets involved in a war without clear objectives and an exit strategy, what follows is usually a quagmire.

Once upon a time, America reflected upon “the Powell Doctrine” before involving itself in military action. Neatly stated, the doctrine says that the U.S. must have clear answers to the following questions before we send our young men and women to die in a foreign war: is a vital national security interest of the U.S. threatened? Do we have a clearly obtainable objective? Have the risks and costs of such a war been fully and frankly analyzed? Have all other non-violent policy means been fully exhausted? Have the consequences of such an action been fully considered, and is the war supported by the American people? Does it have broad international support? And finally, is there a plausible exit strategy?

In the case of almost all those questions, the answer would seem to be no.