Are U.S.-German relations going down the toilet under President Trump? 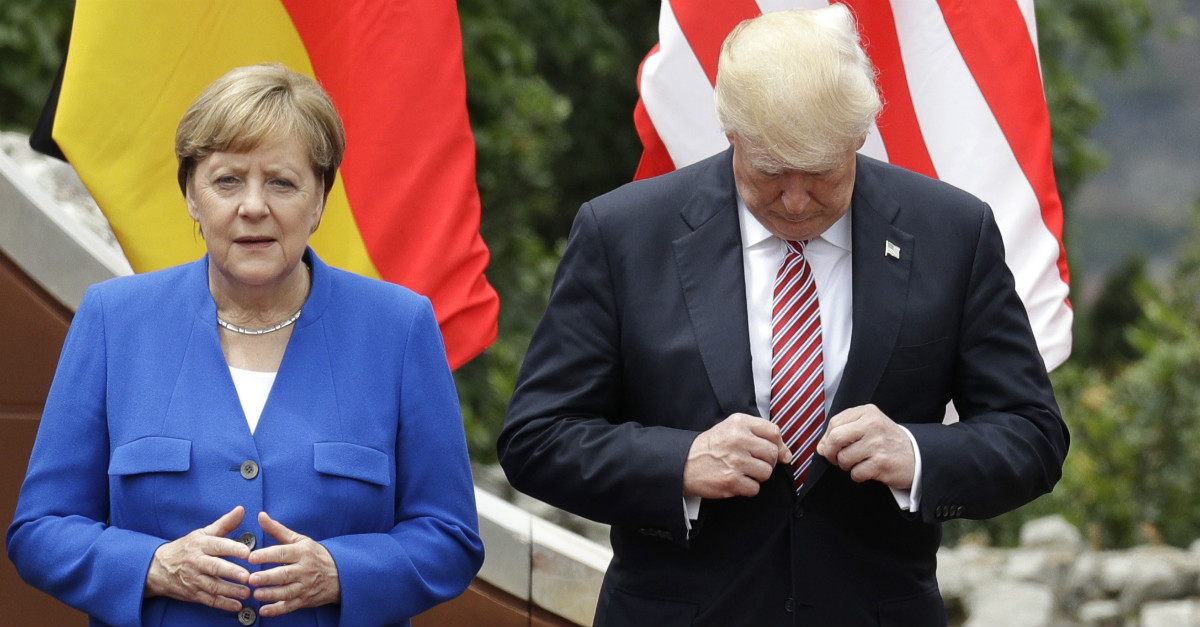 AP Photo/Andrew Medichini
U.S. President Donald Trump, right, adjusts his jacket as he stands with German Chancellor Angela Merkel prior to a group photo during a G7 Summit in the Ancient Theatre of Taormina ( 3rd century BC) in the Sicilian citadel of Taormina, Italy, Friday, May 26, 2017. Leaders of the G7 meet Friday and Saturday, including newcomers Emmanuel Macron of France and Theresa May of Britain in an effort to forge a new dynamic after a year of global political turmoil amid a rise in nationalism. (AP Photo/Andrew Medichini)

Are bilateral relations between the United States and Germany going down the toilet in the Donald Trump era?

After President Trump’s quick stop to Brussels?a trip that was just as notable for its aggressive handshakes and awkward group photos as it was about resolving global problems?it’s easy to arrive at that assessment. Trump was already a highly unpopular, if not disdained, figure in Germany before he took the podium last week and publicly humiliated America’s European allies for being cheap, soft-belly swindlers on their militaries (last year, a poll found that 71 percent of Germans surveyed thought a Trump presidency would make the world a more dangerous place). An astounding 87 percent think that Trump isn’t good for Germany, and it’s hard to see how Trump’s public dressing down about weak European defense budgets and his Germany-bashing behind closed doors (“([t]he Germans are bad, very bad”) will change that narrative for the better. Trump?s early morning Twitter tirades on Germany, including a tweet today denouncing the state of relations between Washington and Berlin (he used the phrase “very bad” again) won’t help matters either.

President Trump, however, isn’t the only one to blame for the ongoing spat. German officials from the center-left and the center-right are going full-throttle against the American president; Sigmar Gabriel, the German foreign minister, all but accused Trump of “putting peace in Europe at risk” by not placing climate change at the top of his agenda. Martin Schultz, a former president of the European Parliament and the chairman of the Social Democratic Party, is launching a rhetorical blitzkrieg against the 45th president, a man that Schultz and his center-left allies clearly believe is an arrogant buffoon

So, here’s the question again: is the U.S.- German alliance of 70-plus years breaking down?

The war of words between the Trump administration and the German government is clearly unfortunate. Much of this turbulence is due to the very different personalities that are involved. Trump is an uncensored, unpredictable and loud showman who plays to the cameras, seeks publicity for himself on an hourly basis, and doesn’t buy into the conventional wisdom of the European Union or NATO as it currently exists being an indispensable factor to the global order. Chancellor Angela Merkel is the polar opposite; she’s deliberate, pragmatic, supportive of multilateral institutions, and sees herself as one of the few leaders in Western Europe who has the power and gravitas to promote the liberal international order that defines European foreign policy in general. Put the two in a room and is it any wonder that differences of opinions arise?

Washington and Berlin, however, are still very close partners. The relationship between their intelligence and security services is quite good. Germany is an important member of the counter-ISIS coalition, sending trainers and advisers to beef up the Kurdish Peshmerga. Berlin has troops in Afghanistan, leading training operations in the north. And the Germans have been the glue holding the EU sanctions regime against Moscow together. All of this is unlikely to change, barring some stupid statement coming out of Trump’s mouth.

What we have here is not a potential crisis in U.S.-German relations, but a clash of personalities. It’s the responsibility of both to ensure that those clashes don’t rise to crisis level.