Barack Obama should butt out of Britain’s European Union debate 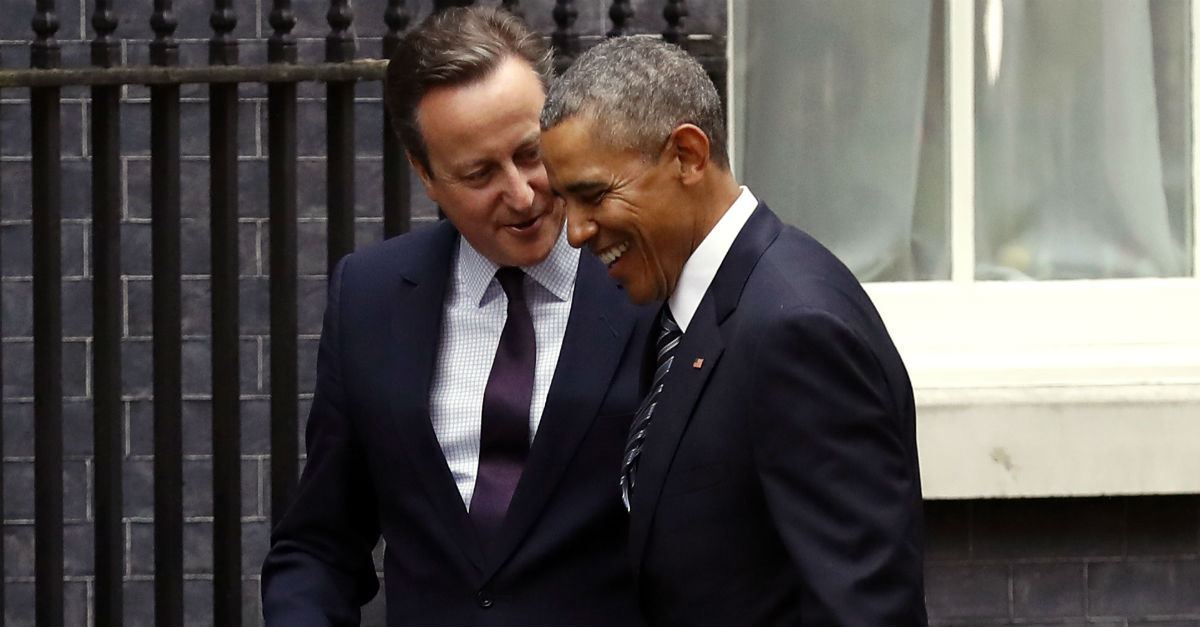 Our president has found himself in the middle of a transatlantic tiff.

Barack Obama visited Great Britain last week, which is preparing for a referendum over “Brexit,” or whether it should leave the bureaucratic juggernaut that is the European Union. Obama is an opponent of Brexit—fair enough, most world leaders are—but at a press conference with British Prime Minister David Cameron, he placed a ransom on his position:

“I think it’s fair to say that maybe some point down the line there might be a U.K.-U.S. trade agreement, but it’s not going to happen any time soon because our focus is in negotiating with a big bloc, the European Union, to get a trade agreement done,” he said. “The U.K. is going to be in the back of the queue.”

In other words, if Britain votes to leave the EU, it can kiss goodbye to a trade deal with America anytime soon.

Start with the fact that the substance of this threat is specious at best. The United Kingdom was America’s seventh-largest trading partner in 2015, ahead of every European nation except Germany. Yes, the EU overall outweighs the UK, but the notion that America is going to sit down with trade representatives from the Republic of Congo while the British shiver in the rain is absurd. And anyways, trade between the U.S. and the UK is humming along even without a current agreement.

There’s also the larger question of whether Obama should be staging a Brexit intervention in the first place. The EU has an anti-American bent that’s often worked against our national interest. And the tenor of the anti-Brexit Remain campaign has been one of untrammeled scaremongering that’s earned it the apt nickname “Project Fear,” as Cameron and his ministers try to spook the British people over everything from a collapse in economic growth to a blockage in trade. Is this really what the president of “yes we can” wants to associate himself with?

Boris Johnson, the flaxen-haired public face of the pro-Brexit Leave campaign, recently wrote an op-ed for the Sun denouncing Obama, and while it elicited more attention for its heedless attack on our “part-Kenyan President,” it also made this point about the EU:

It is deeply anti-democratic – and much as I admire the United States, and much as I respect the President, I believe he must admit that his country would not dream of embroiling itself in anything of the kind.

The US guards its democracy with more hysterical jealousy than any other country on earth.

He’s right, you know. Try to infringe on our affairs the way Brussels has with Britain, and Americans would be back at Lexington and Concord. We aren’t entirely comfortable being governed from Washington (as non-exotic a capital as you’re likely to find), let alone Ontario or Mexico City, which is why Vermont mulled seceding from the union during the Bush administration and secessionist rumblings were heard from Texas at the start of Obama’s presidency. The pompous, pallid, disconnected micromanagement of the EU runs counter to everything we stand for. Our freedom, our sovereignty, our local control—they’re in our marrow, as cheesy as that might sound.

So why are we demanding that the nation from which we inherited these ideas—the nation of the Magna Carta, John Locke, John Stuart Mill, and English liberalism—apply a wholly different standard, one that would have us in the streets with pitchforks? And why aren’t we more startled that the home of George Orwell—who foreshadowed the creation of supra-national states with Oceania and Eurasia in Nineteen Eighty-Four—has signed on to the European Union?

There are upsides to Britain remaining in the EU, most notably stability and access to the world’s largest free-trade zone. But ultimately, the Brits are deciding on a question with far greater consequence than the sugar rush of quarterly GDP numbers: whether they should be wholly sovereign or whether they should mortgage some of their sovereignty to Brussels. That’s a question for them to decide, not the American president. Anyways, we already know what our answer would be.