Donald Trump is the sober leader when it comes to Russia, it’s John McCain who is dead wrong 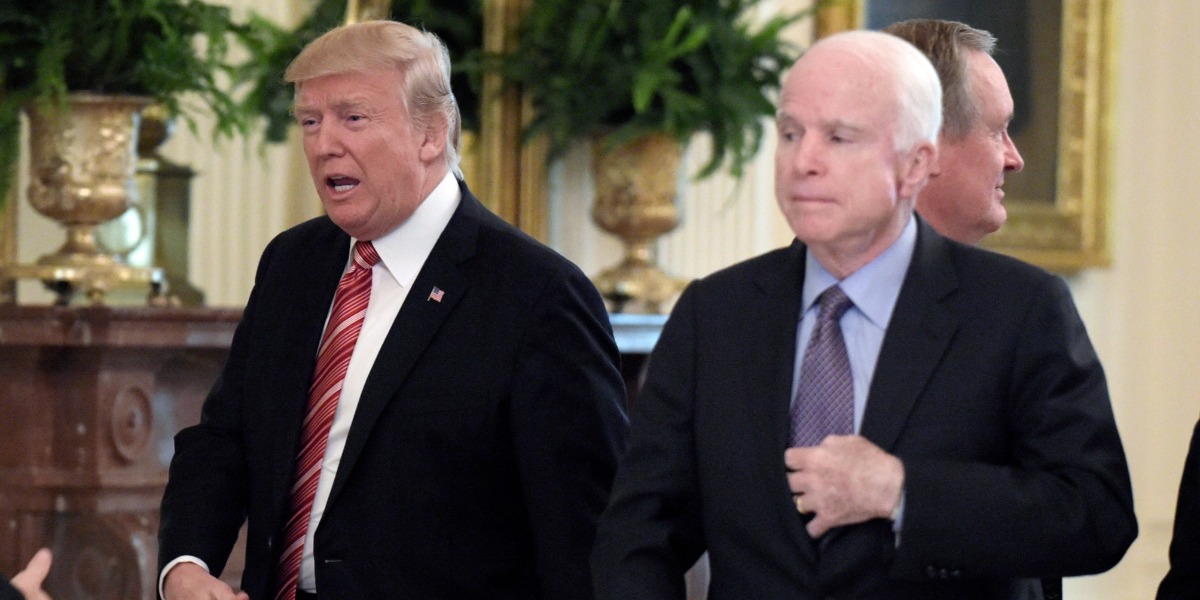 This week, an overwhelming majority of Congress voted to pass legislation imposing new sanctions on Russia and President Trump reluctantly signed it into law. It didn’t take long for the president to air his frustration on Twitter.

“Our relationship with Russia is at an all-time & very dangerous low. You can thank Congress, the same people that can’t even give us HCare!” Trump wrote.

Our relationship with Russia is at an all-time & very dangerous low. You can thank Congress, the same people that can't even give us HCare!

Trump campaigned on improving relations between the U.S. and Russia. “I think we get along very well and I think that’s a good thing, that’s not a bad thing,” Trump said of a 2016 meeting he had with Russian President Vladimir Putin.

Obviously, in the president’s view, the new sanctions will hurt his efforts.

Sen. John McCain responded to Trump’s tweet with a message of his own on Twitter. “Our relationship w/ Russia is at a dangerous low. You can thank Putin for attacking our democracy, invading neighbors & threatening our allies,” McCain wrote.

Our relationship w/ Russia is at dangerous low. You can thank Putin for attacking our democracy, invading neighbors & threatening our allies

McCain seems to believe that Russia’s contamination of the U.S. election (however impactful or insignificant) and Putin’s military actions have made relations between the U.S. and Russia untenable. He’s not entirely wrong. Putin is certainly poking at the United States in a myriad of ways. But Sen. McCain has also been gunning for a new Cold War for years.

This has less to do with Trump or the election than it does the dangerous worldview of uber-hawks like McCain. As Rare’s Barbara Boland noted recently, you’d be hard pressed to find a U.S. military action that McCain did not vigorously support.

It’s an extreme position to want to do everything you possibly can to heighten tensions with foreign countries. John McCain’s upstanding reputation doesn’t change that. Not only today, but in 2016, 2015, 2014, 2013, 2012, 2011, 2010, 2009, going all the way back to 2008 when he was the Republican presidential nominee, McCain has taken positions that seem to demand nothing less than a military confrontation with Russia. In 2013, progressive outlet Mother Jones even put together a useful map of all the countries McCain has wanted to attack, including Russia.

Trump, on the other hand, thought that maybe having better relations with Russia, including Putin, would ease tensions or policies. This approach is not weak or naive, as many Putin-obsessed Democrats or even Republican hawks like McCain would likely characterize it.

Pat Buchanan observed in 2007, “Richard Nixon went to Moscow and concluded strategic arms agreements while Moscow was the arms supplier of the enemy we were fighting in Vietnam that used, at Hue, mass murder as a war tactic.” Buchanan also noted, “In 1959, President Eisenhower rode up Pennsylvania Avenue in an open convertible with Nikita Khrushchev, Stalin’s gauleiter in Ukraine, who, three years before his tour of the United States, had sent tanks into Budapest to butcher the patriots of the Hungarian Revolution.”

Both Nixon and Eisenhower were known as Republican presidents who pursued realist foreign policies, a label that has also been given to Trump, at least during the campaign. McCain takes the neoconservative view, and is similar to President George W. Bush and his Vice President Dick Cheney — both of whom Trump has strongly denounced for starting the 2003 Iraq War. Many considered McCain’s 2008 presidential campaign an expression of Republicans’ desire to extend Bush-Cheney-style foreign policy another four years and McCain himself embraced that vision (America tiring of that view was a big part of why Barack Obama won).

The decision to have better relations with Russia or any other country, even under complex circumstances, is not something new for American presidents, including Trump. Trump promised a reset with Russia, and now laments that that is less possible because of these sanctions, sanctions that are arguably more political than they are beneficial to American national security. Republicans who want to show their independence from the president overwhelmingly voted for these sanctions, along with Democrats who too often seem convinced the U.S. is being ruled by the Kremlin. McCain benefits from this hysteria on both sides, so it’s easy to forget that his aggressive stance toward Russia is not new or specific to this president.

Though they are both Republicans, McCain and Trump come from very different foreign policy traditions within their own party — at least as it pertains to Russia. The relationship between the U.S. and Russia is complicated any way you slice it, but between John McCain and Donald Trump there should be no doubt about which leader is taking the sober approach and who continues to be dangerously unhinged.