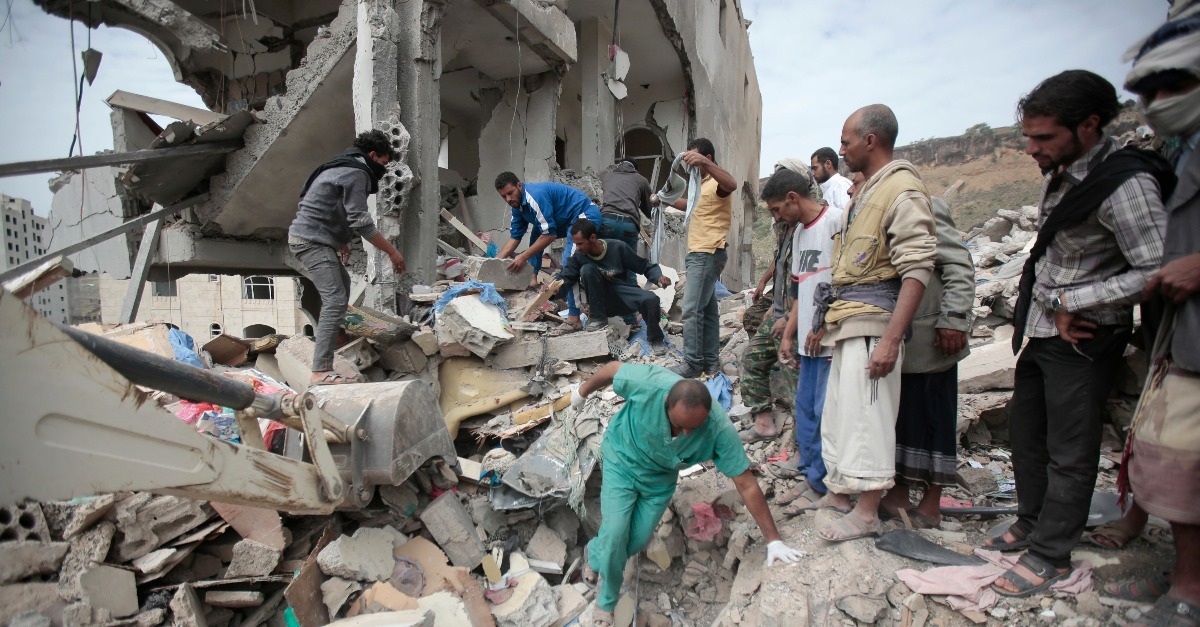 When an authoritarian government deliberately bombs civilians, the United States usually condemns the violence as a violation of international law. Over the past seven years, the U.S. State Department and the White House have issued so many statements expressing horror over the Assad regime’s conduct in Syria that you would need hours to collate them all. Such press releases are often depicted as public relations exercises, and they may very well be. But even so, America’s condemnation of a government is a powerful notice that the world’s superpower knows what’s going on and is disgusted by it.

Yet when American allies engage in the same behavior, Washington has a habit of remaining silent or explaining away the civilian casualties as the result of targeting mistakes that will be remedied in the future. And when the State Department does condemn the killing of civilians by a friendly government, it’s typically to remind the partner that it needs to do better rather than to express real revulsion.

RARE POV: Donald Trump’s statement on Venezuela might have been admirable were it not so hypocritical

Over the past two days, the Saudis dropped bombs on residential areas in Yemen, killing more than 40 people. If the same thing had occurred at the hands of the Assad regime, the United States would be quick to inject its full moral authority into the situation — and it would be right to do so. But because Saudi pilots are doing the bombing instead of Syrians, the Trump Administration hasn’t made a peep. The silence in Washington is deafening and it’s made the United States look like one of the biggest hypocrites in the world.

It would be one thing if America had no role in Yemen’s slide into famine and despair. But the U.S. military has been a logistical supporter of the Saudi-led Arab coalition ever since Saudi jets unleashed their very first bombs on Houthi rebel targets over two and half years ago. Indeed, were it not for this support — mid-air refueling, tens of billions of dollars in weapons contracts, ammunition and munition sales, diplomatic shielding at the U.N. Security Council and the U.N. Human Rights Council — it wouldn’t be possible for Riyadh to launch as many airstrikes as it has. The civilian death toll would certainly be lower.

U.S. military aid to the Saudis in the Yemen conflict is not only a terrible blemish on America’s morality; it’s a strategic mistake that’s enabling Saudi misbehavior and turning an entire country into a humanitarian catastrophe. Just take a look at the statistics: 7 million people on the verge of famine, including 2.3 million children; more than half of Yemen’s hospitals and clinics offline; a cholera outbreak that’s infected more than half a million people in just three months; at least 10,000 people killed and who knows how many lives upended. As long as the U.S. continues offering support without questions asked and conditions met (and penalties enforced when violations happen), these numbers will only go up as the war drags on.

Every expert who has studied the Yemen war has determined that no party is strong enough to win the conflict militarily. Only a political arrangement through inclusive and time-consuming negotiations will have a shot at lowering the violence. Backing from the U.S., however, is persuading the Saudis and the exiled Yemeni government that they have the time. Washington is on the hook for Yemen’s devastation. Fortunately, it still has an opportunity to cut the bait and extricate itself from any association with a Saudi campaign that as far as anyone can tell consists primarily of committing war crimes and perpetuating a stalemate. It must do just that.