Poland sits at a unique vantage point in Europe today. It is outside the French-German power bubble yet its economy is galloping forward and its military is relatively formidable. It overwhelmingly approves of the European Union yet is a vanguard member of the superstate’s conservative bloc. It is at the heart of Europe yet remains deeply pro-American. It still reels from Nazi and Soviet totalitarianism yet has elected a government that many worry is itself trending illiberal.

Into this nest of contradictions on Thursday stepped Donald Trump to give his much-anticipated address in Warsaw. The speech was part Polish history lesson, part rallying cry to Western civilization, with the pull quote: “The fundamental question of our time is whether the West has the will to survive.” Trump’s language at times seemed tailored to answer his critics, as he finally issued an unambiguous endorsement of NATO’s Article 5 after months of waffling and demanded that his supposedly cozy partner Russia stop its “destabilizing activities in Ukraine and elsewhere.”

This should have been acupuncture for media elites, the first Trump speech they could cheer that didn’t involve starting an illegal war in Syria. Instead, braying commenced. Local beach lifeguard Joe Scarborough slammed the opening of the address with his customary eloquence: “One of the worst ever,” he drawled. Others accused Trump of making detrimental common cause with Poland’s ruling Law and Justice Party (PiS), which has espoused nationalism and encroached on free media.

But Trump had an answer to that latter criticism: Lech Walesa, the former president of Poland and anti-Soviet freedom fighter. Trump brought Walesa to the speech and praised him over the wishes of the Polish government, which regards Walesa as a nettlesome detractor and has sought to write him out of their country’s history books. It was too gentle an admonishment to the PiS—we might admire you, just not your historical revisionism—but it was important and clearly heard.

Over now to Vox.com, which leveled the incredible accusation that Trump’s speech was an “alt-right manifesto” because—would that we all could achieve this level of wonkishness!—it was centered on the themes of nationhood, family and God. They got at least that third item right. Trump extolled Polish Christianity extensively, echoing the Poles’ cries of “We want God!” when Pope John Paul II visited Soviet-occupied Poland in 1979 and presenting their faith as a model for Europe today.

It wasn’t frothing alt-rightism; it was an acknowledgement that the story of Poland cannot be told without a chapter on its Christianity. Battered by atheist totalitarians, the Poles found an alternative in God; presented with the false mythology of Lenin, they rallied behind their pope; up against the crunching apparatus of global communism, they helped bring it crashing down by putting their faith in something more transcendent. For Poland, at least, this was a clash between God and government and the former won.

Trump acknowledged as much during his speech:

Finally on both sides of the Atlantic, our citizens are confronted by yet another danger, one firmly within our control. This danger is invisible to some but familiar to the Poles: the steady creepy of government bureaucracy that drains the vitality and wealth of the people. The West became great not because of paperwork and regulations but because people were allowed to chase their dreams and pursue their destinies.

RELATED: “First, do no harm”: How Trump can make his first meeting with Vladimir Putin a success

That’s one of the most remarkable statements I’ve ever heard from a head of state, one that (rightly) classifies the unchecked bureaucratic state as an earlier-stage communist menace. And it’s here that we find the main targets of Trump’s Warsaw address: not the PiS, not insufferable Joe and Mika, but the European Union and its France-Germany alliance. Where those nations treasure secularism, Trump held up Poland’s traditional faith as a model for European renewal. Where the EU subscribes to the primordially French idea that a bureaucrat can solve any problem, Trump chided that Poland knew better. Where Western Europe has enervated its militaries, Trump praised the Poles for being the rare nation that meets NATO’s 2 percent GDP defense spending requirement.

It was a tacit revival of Donald Rumsfeld’s off-the-cuff remark from 2003 that France and Germany constituted “old Europe” while the continent’s seat of power was shifting eastward. And then Trump departed for the G20 meeting in Germany where he was met by protesters and surely the revolutionary message of his Warsaw address had not failed to sink in. 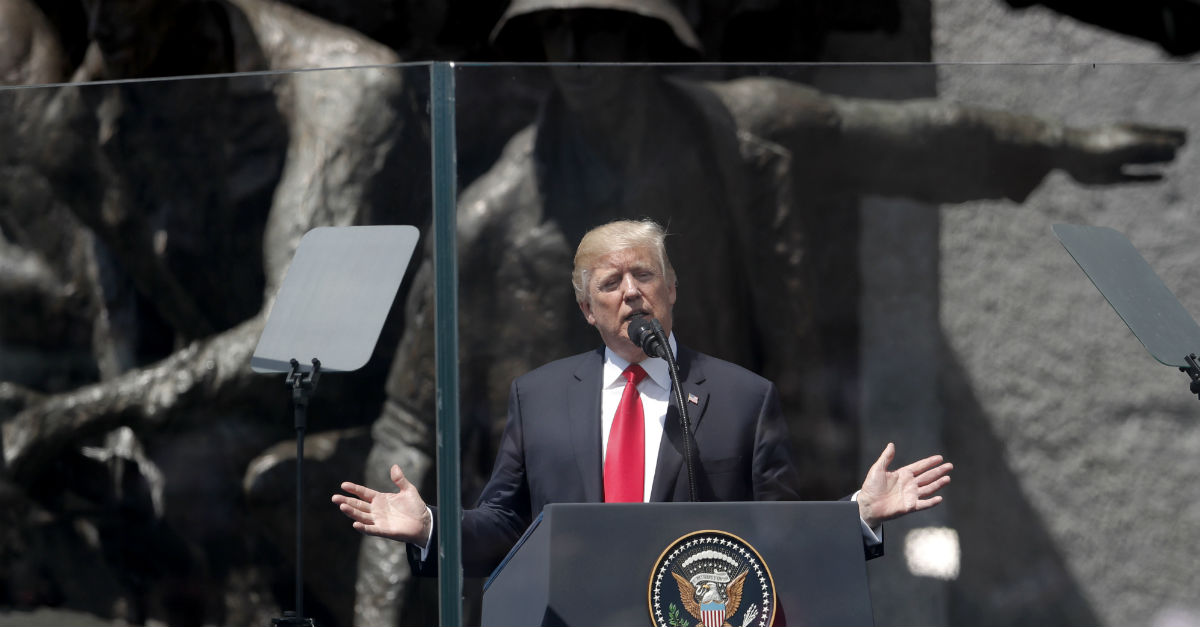