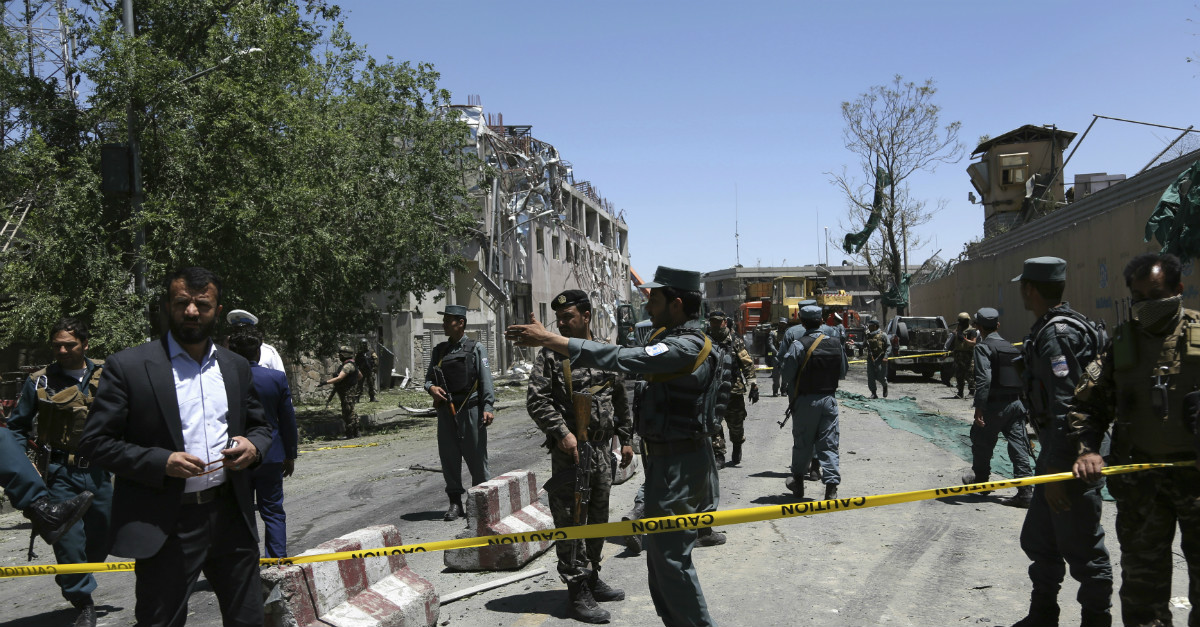 AP Photos/Rahmat Gul
Security forces inspect near the site of a suicide attack where German Embassy is located in Kabul, Afghanistan, Wednesday, May 31, 2017. A massive explosion rocked a highly secure diplomatic area of Kabul on Wednesday morning, causing casualties and sending a huge plume of smoke over the Afghan capital. (AP Photos/Rahmat Gul)

Wednesday morning, Afghans and Americans were streaming into the diplomatic quarter of Kabul just like on any other day. But instead of the usual ritual of going through the security checkpoints outside the perimeter, they passed the gates of hell.

The scene was about as grisly as you would expect from a truck bomb strategically detonated next to foreign embassies: the 1,500 kilograms of explosives hidden in a sewage truck erupted with full force, destroying cars, damaging buildings, leaving a mushroom cloud over a swath of Kabul, and killing over 80 people. The Guardian reports that “[h]ouses hundreds of metres away from the explosion were damaged, with windows and doors blown off their hinges.” The State Department says 11 Americans were injured in the attack.

The Taliban has denied responsibility, and the Afghan intelligence service is pointing the finger at the Haqqani Network, a group that for years has leveraged its safe havens in Pakistani tribal areas and eastern Afghanistan to plan sophisticated bombings in Kabul.

Figuring out who is responsible is job number one for the Afghan security services, and President Ashraf Ghani obviously hopes that his intelligence officials will come to their conclusion quickly. The Afghan government is desperate for popular legitimacy as it is, so failing to secure the capital and prevent any follow-up attacks would further degrade the already low confidence with which the Afghan people regard Ghani’s administration.

How will this latest attack, one of the worst that Kabul has faced in the entire Afghanistan war, impact White House deliberations? President Trump, after all, authorized the use of force against the Syrian government after viewing graphic pictures of dead men, women, and children in a sarin gas attack. It’s not a stretch to believe that Trump would be similarly affected once he sees footage of bloodied and limp Afghan civilians.

As far as we know, President Trump has yet to receive the National Security Council’s final recommendations on Afghanistan. Defense Secretary Jim Mattis, National Security Advisor H.R. McMaster, Chairman of the Joint Chiefs Joe Dunford, and Commander John Nicholson are all supportive of sending an additional 3,000-5,000 American troops to the country, betting that they can turn the security situation around—or at least arrest any further Taliban territorial gains. Trump’s political advisers, including chief strategist Steve Bannon, aren’t sold on what the military is offering (opponents of the strategy are dubbing it “McChrystal’s War”). Like the Obama administration before it, the Trump White House is far from unanimous on what the best course of action is in a nation that’s long seemed impervious to Western solutions.

It sounds paradoxical, but the Mattis and McMaster camp may have just been handed a gift after this massive Kabul bombing. “This is what Afghanistan is going to look like,” they may argue, “unless you, Mr. President, approve our troop request. The Afghan forces need out help, and we will lose the war to the Taliban if the U.S. doesn’t give them a firm, long-term commitment.”

The question is, will President Trump bite?