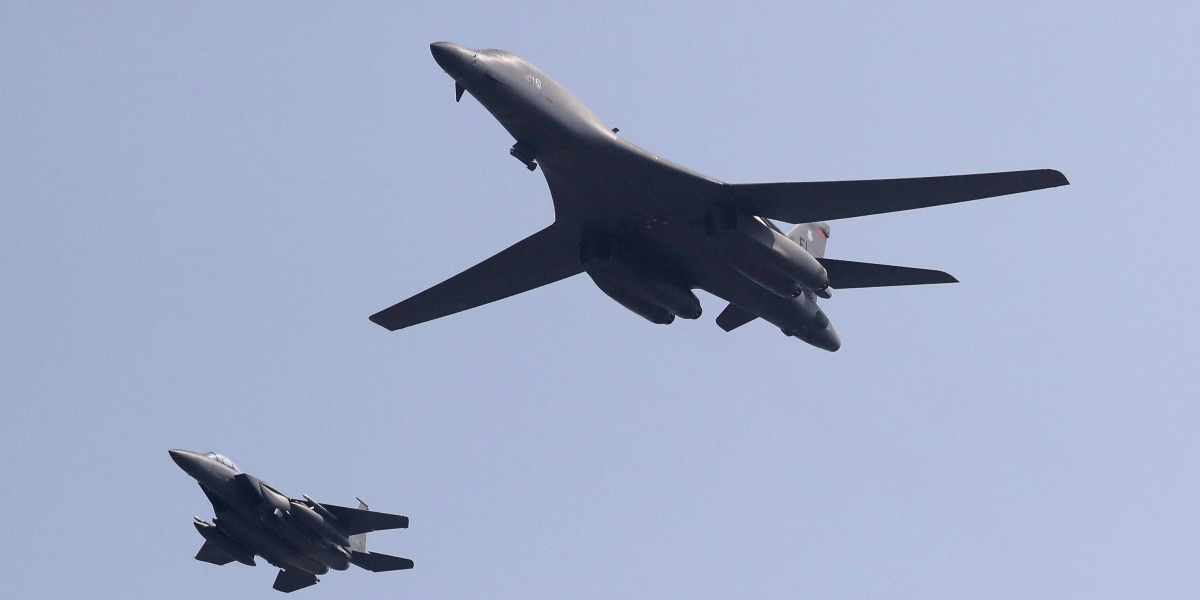 During the Cold War, the United States kept nuclear-armed bombers on 24-hour ready alert in case our conflict with the Soviet Union ever turned hot. Thankfully, that readiness was never put to use, and after the Cold War ended in 1991, the bombers were no longer kept on standby, ready to strike.

Until, perhaps, now. As Defense One reported Sunday evening, the Air Force is preparing to revive that alert status in anticipation of an order to do so from President Trump in connection to North Korea.

Air Force Chief of Staff Gen. David Goldfein told Defense One this is merely “one more step in ensuring that we’re prepared,” and not a response to “any specific event,” but the implication is clear: The military believes Trump wants to be ready to nuke North Korea (and perhaps other countries, too) at a moment’s notice, ordering the death of tens if not hundreds of thousands of people with the ease of a one-click purchase on Amazon.

Not to put too fine a point on it, but this is incredibly stupid.

To move back to our Cold War posture would be a dangerous and short-sighted escalation that would make unthinkable devastation of nuclear war more likely. To decrease the barriers to using our nuclear arsenal — to make these incredibly deadly and indiscriminate weapons more accessible in any context, but particularly to a president known for his personal impulsiveness — would be reckless beyond belief.

As Goldfein’s comments seem to acknowledge, this is unlikely to serve as deterrent to nuclear war. Consider this exchange from the Defense One story:

Asked if placing B-52s back on alert — as they were for decades — would help with deterrence, Goldfein said it’s hard to say.

“Really it depends on who, what kind of behavior are we talking about, and whether they’re paying attention to our readiness status,” he said.

That’s hardly a ringing endorsement, and for good reason: To claim that having bombers constantly ready to nuke people is a step away from nuclear war is like disengaging the safety on handgun and claiming the gun will be harder to fire.

Gearing up for nuclear war is not a way to prevent nuclear war. Only in the Orwellian bowels of government could anyone think otherwise.

Earlier this year, in light of the anniversary of the U.S. nuclear strikes on Hiroshima and Nagasaki, I wrote at Rare about the nuclear tensions between North Korea and the United States, which are rising significantly because of the bizarre war of words between Trump and North Korean dictator Kim Jong Un. I began by sharing some excerpts from John Hersey’s famous essay “Hiroshima,” which chronicled the horror of nuclear warfare among Japanese civilians:

“He was the only person making his way into the city; he met hundreds and hundreds who were fleeing, and every one of them seemed to be hurt in some way,” wrote John Hersey of Rev. Kiyoshi Tanimoto in 1946’s essay “Hiroshima” for The New Yorker.

“The eyebrows of some were burned off, and skin hung from their faces and hands,” Tanimoto saw.

“Some were vomiting as they walked. Many were naked or in shreds of clothing. On some undressed bodies, the burns had made patterns — of undershirt straps and suspenders.”

As it was for many Americans, this essay was assigned reading in one of my high school English classes. I remember finding it boring at the time. The style was so dry and matter-of-fact that as a teenager, the events described felt very far removed from me. I had never been part of a bomb drill at school, like my parents had. I was born during the final years of the Cold War, and by the time I was old enough to make real memories, the fear it inspired had faded.

Today it seems we all could use a little more exposure to Hersey’s account and the caution it was intended to produce. Feckless presidential provocation is bad enough, and we already have plenty of that to go around where nuclear conflict is concerned. It would be beyond foolish to take this step toward one-click nuclear war.