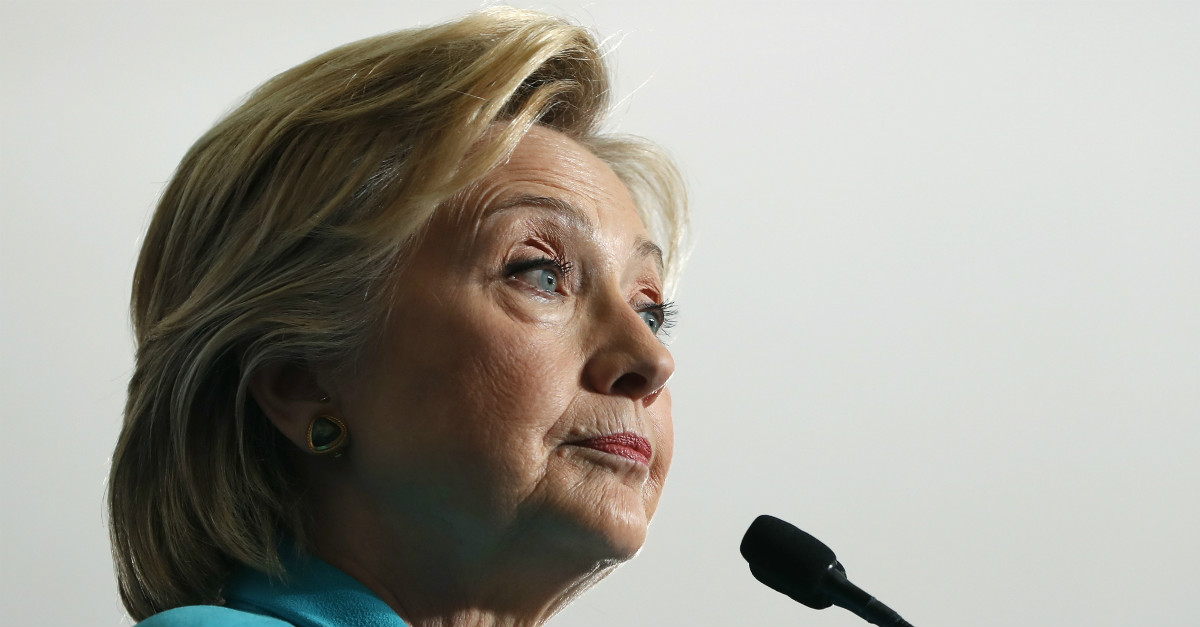 AP Photo/Carolyn Kaster, File
FILE - In this Thursday, Aug. 25, 2016, file photo, Democratic presidential candidate Hillary Clinton pauses as she speaks at a campaign event at Truckee Meadows Community College, in Reno, Nev. Republicans and Democrats sparred Sunday over whether Hillary Clinton crossed ethical lines during her tenure as secretary of state by talking with people outside the government who had contributed to her family's philanthropy foundation. (AP Photo/Carolyn Kaster, File)

Have you heard? Hillary Clinton has joined the #Resistance! Clinton, one of the few molecular structures on earth capable of losing a presidential election to Donald Trump, announced the merger earlier this month, and surely the opposition to Trump is thrilled, as it now counts among its members both her and the equally magnetic Kathy Griffin. Thus does Clinton continue to rattle around in the Democratic attic like Jacob Marley, only rationalizing her errors rather than atoning for them.

Clinton has been such a political liability that it’s easy to forget that she’s been a policy liability as well. Nowhere is that more evident than in Libya, where in 2011 President Obama launched a military campaign against Moammar Gaddafi’s regime after being persuaded to do so by Clinton. Gaddafi was toppled, the deja vu scenery of Iraq fell into place, and Libya plunged into chaos, tugged between multiple governments in its west and east with a plethora of militias battling in between.

Clinton was occasionally challenged on the campaign trail over her calamitous Libyan adventure, first by Bernie Sanders and then by Donald Trump, but she deflected the criticism and the issue rarely rose above the fold. Then horror came to Manchester, England, last week as a bomb exploded at an Ariana Grande concert, killing 23 and injuring 116. The terrorist behind the attack, identified as Salman Abedi, was of Libyan descent. His parents were part of an Islamist opposition group to Gaddafi called the Libyan Islamic Fighting Group, and fled their home country in the 1990s. They settled in Britain amidst a diaspora of fellow expatriates.

RELATED: The election is over but Hillary Clinton?s self-pitying presidential campaign rolls onward

The elder Abedis would return to Libya in 2011 to fight Gaddafi during the civil war. Subsequent trips to the Northern African country by Salman would cause him to change, becoming more religiously puritanical and dropping out of university. Friends and neighbors became so alarmed that they reported him multiple times to British authorities. Earlier this year, Abedi yet again decamped to Libya where he stayed for three weeks before returning just days before the Manchester bombing.

There are still plenty of unanswered questions here. Counterterrorism authorities don’t yet know whether Abedi received bomb-making training during his Libya getaway or how extensive his jihadist interactions were there. It’s also important to note that Manchester’s Libyan community is not some festering pool for extremism: most of its members were saddened by Abedi’s bloodshed.

What is certain is that since Hillary Clinton convinced Obama to lead a military coalition against Gaddafi?very much from the front, not from behind?Libya has become an epicenter of Islamic extremism in Northern Africa. ISIS for many months designated as its auxiliary capital the city of Sirte, Gaddafi’s hometown; government forces drove the group out late last year, but it regrouped in the Libyan desert where it maintains a presence.

Terrorists behind numerous attacks in neighboring Tunisia, including gunmen who killed 38 tourists at a resort in Sousse and jihadists who slew 21 during an attack on the Bardo National Museum in Tunis, were trained in Libya. In early 2015, ISIS thugs beheaded a group of Coptic Christians kidnapped from Egypt on a beach in Libya. Weapons smuggled out of Moammar Gaddafi’s stores have been used to inflame conflicts in Mali, Niger, Somalia, and Gaza, as well as the Syrian Civil War. Libya is also far more proximate to the West than other terrorism hotspots like Iraq; a literal jihadist beachhead has thus been established only a skip across the Mediterranean from Italy.

RELATED: At the rate we?re going, we?ll be stuck in the Middle East for decades to come

So it shouldn’t surprise anyone that the Manchester attacker also traces back to Libya.

What should unsettle even the most grizzled foreign policy observer is just how little attention the Libyan connection has received over the past week, and how scarce the scrutiny of Hillary Clinton’s war has been. Glamorizing her pathetic post-election self-pity is what makes the Rebecca Traister profile, I suppose, while serious foreign policy analysis gets left on the cutting room floor. But unlike allegations of Trump’s collusion with Russia for which there is no concrete evidence, Clinton really did help turn Libya into a jihadism-rampant vacuum.

That’s an actual scandal, one the “Democracy Dies in Darkness” crowd might look into.