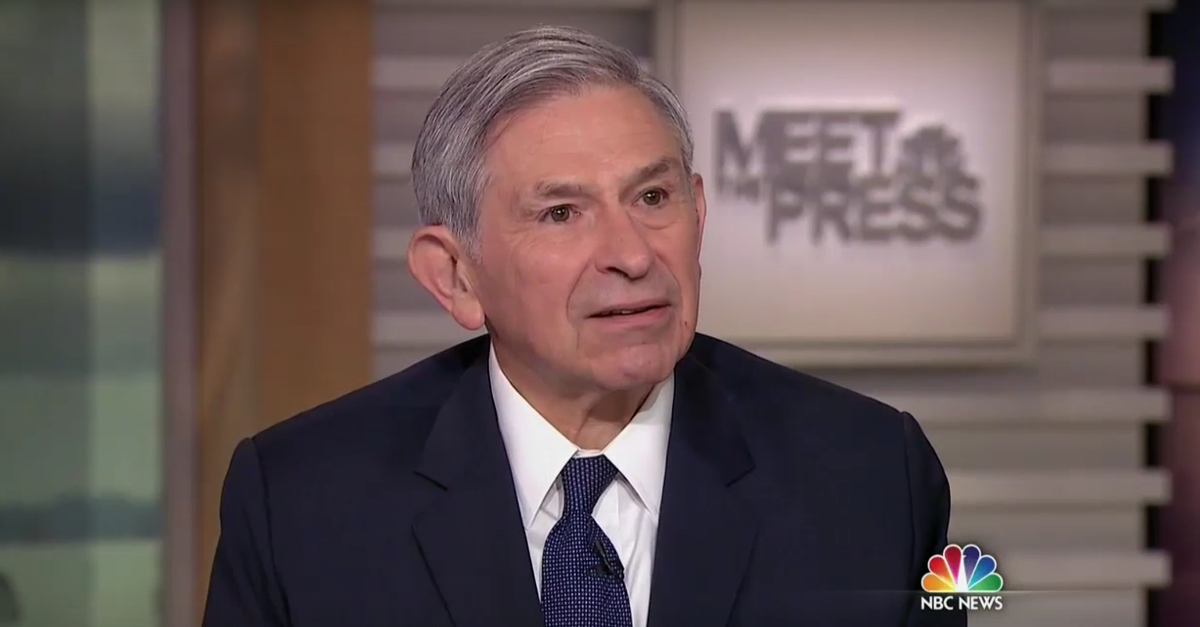 During the first two years of the George W. Bush administration, neoconservatives were on the ascent. The Taliban regime in Afghanistan was deposed in a few short months, Saddam Hussein’s 24-year reign in Iraq was over, the dictator himself was dragged out of a spider hole by U.S. troops, and the theocratic government in Iran was thought to be the next casualty on America’s checklist. Even more important was the sudden transformation in how the United States viewed the world: America’s enemies were the personification of evil, and it was America’s job to either keep them at bay or defeat them.

As soon as Iraq went sour, neoconservatism became a dirty word in American politics. It was a rapid fall from grace. In 2003, they were at the pinnacle of their power as a movement. Today, they’re a bunch of exiles who have been out of government for eight years.

Yet they continue to make no apologies for the disastrous policies they pushed.

Enter Paul Wolfowitz, one of the leading members of the neoconservative camp (although he would dispute the neocon label) who nonetheless continues to get airtime from the major networks. This past Sunday, he was a guest on NBC’s “Meet the Press” on the 15th anniversary of the 9/11 terrorist attacks. The discussion naturally turned to the invasion and occupation of Iraq, and became illustrative of just how delusional neoconservatives can be:

CHUCK TODD: I read the other day in an interview you took issue with the moniker architect of the Iraq War. Why do you not accept that title?

PAUL WOLFOWITZ: Because I was not in charge, I was not the Commander-in-Chief or even the Secretary of State or the Secretary of Defense or National Security Advisor. And more importantly, because I think and I thought at the time there were a lot of things that should have been done differently. If you think about it, if we had had a counterinsurgency strategy like we did during the surge, if we had had that from the beginning, I think Iraq would look like a very different place today and history would look very different. Instead of waiting until 2007, 2008 to defeat Al-Qaeda in Iraq, they could have been defeated two or three years earlier.

RELATED: Why do neoconservatives never have to distance themselves from Frank Gaffney?

There you have it. No apologies. No second thoughts. No remorse about the sectarian cataclysm in the Middle East after the invasion. No acknowledgement that the invasion and occupation gave al Qaeda a second lease on life after it was whipped in Afghanistan.

If any mistakes were made…well…it wasn’t Wolfowitz’s fault. It was President George W. Bush’s fault.

Ultimately, President Bush is responsible. He was the commander-in-chief at the time. But we shouldn’t be fooled by Wolfowitz’s answer. Historians have shown that he was an incredibly powerful force in the Bush administration and perhaps one of the most powerful deputy defense secretaries in American history.

It was Wolfowitz who helped pen the now-infamous 1998 letter to President Bill Clinton advocating for regime change in Iraq by any means necessary – back when Bush was still in the Texas governor’s mansion and knew very little about foreign policy.

It was Wolfowitz who, less than a week after the 9/11 attacks, suggested attacking Saddam in retaliation during a meeting at Camp David. Everyone at the meeting thought he was crazy for bringing that up; even Vice President Dick Cheney didn’t go for it at the time.

RELATED: Hawks and neoconservatives want to do some pretty insane things in Syria

It was Wolfowitz who told New York Times Magazine that Iraq could be “the first Arab democracy” and therefore a good example for the rest of the region.

It was Wolfowitz who openly scoffed at then-Army chief of staff General Eric Shinseki for his (wholly accurate) assessment that hundreds of thousands of American troops would be required to win the war and win the peace.

And it was Wolfowitz who was the leading proponent for meshing together Iraq and the war on terrorism despite the fact that Saddam and al Qaeda had a visceral hatred for one another and viewed each other’s aspirations as a direct danger to their own survival.

Neoconservatives wouldn’t receive so much hatred if at least some of them – particularly those who still have influence – recognized the true scope of their mistakes. Wolfowitz isn’t helping their cause.