It took a 13-hour filibuster to get Obama to say he wouldn’t target U.S. citizens, but Trump is already giving his answer 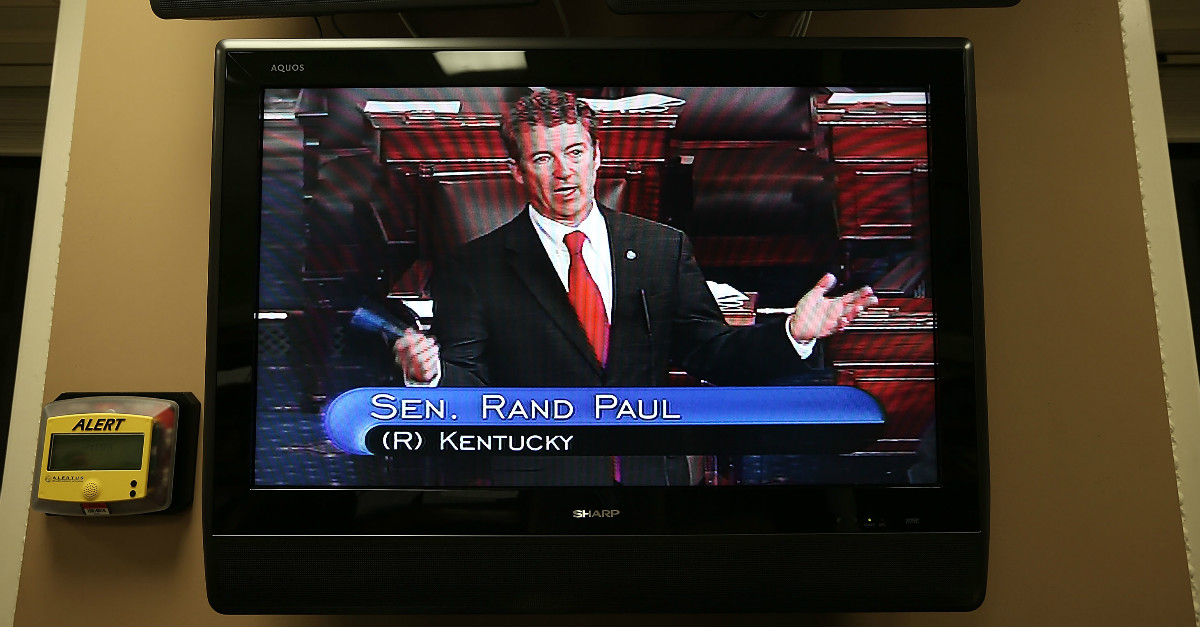 Photo by Alex Wong/Getty Images
WASHINGTON, DC - MARCH 06: U.S. Sen. Rand Paul (R-KY) is seen on a TV monitor as he participates in a filibuster on the Senate floor March 6, 2013 on Capitol Hill in Washington, DC. Paul is filibustering the Senate to oppose the nomination of John Brennan to be the next director of CIA. (Photo by Alex Wong/Getty Images)

In March 2013, Sen. Rand Paul talked non-stop on the senate floor for 13 hours holding up the confirmation of John Brennan as the new head of the Central Intelligence Agency.

His mission? To get a direct answer from the Obama White House on whether or not they believed they had the legal right to kill noncombatant U.S. citizens with drone strikes on foreign soil.

The Washington Post reported the evening of Paul’s filibuster, “Attorney General Eric Holder has written a letter to Sen. Rand Paul (R-Ky.) saying that a drone could not be used against a noncombatant American.”

“Does the president have the authority to use a weaponized drone to kill an American not engaged in combat on U.S. soil?” read Holder’s letter.

“The answer to that is no.”

Paul replied, “I’m quite happy with the answer. Through the advise and consent process, I’ve got an important answer.”

One has to wonder if Paul had not filibustered if Obama’s Department of Justice would have gone on record that clearly, because it wasn’t simply an academic question—then or now.

Concerns about the perceived legality of such actions by the Obama White House arose when American born cleric and al-Qaeda member Anwar al-Awlaki was targeted and killed by U.S. forces in a drone strike in Yemen in 2011. The Obama administration also oversaw the Yemen killing of al-Awlaki’s 16-year-old son, Abdulrahman, who was also an American citizen.

“My grandson was killed by his own government,” wrote the Abdulrahman al-Awlaki’s grandfather in a New York Times op-ed in 2013. “The Obama administration must answer for its actions and be held accountable.

On Tuesday, the Trump administration announced they would be breaking with Obama’s precedent.

Time reports, “The Trump Administration signaled Tuesday that it is apparently breaking from the Obama Administration directive that allowed the government to target specific American citizens involved in terror plots overseas.”

Time reports, “The statement came after a strike in Yemen reportedly killed the 8-year-old American daughter of Anwar al-Awlaki, the American-born al Qaeda in the Arabian Peninsula propagandist—who was himself killed in 2011 by an Obama-ordered drone strike.”

Obviously the Obama administration being coerced by Sen. Paul into saying explicitly that they did not have the right to assassinate U.S. citizens did not jibe with the fact that they had done it twice already, in the case of both Anwar and Abdulrahman al-Awlaki.

Their 8-year-old relative who died last week, according to journalist Jeremy Scahill (via The Intercept’s Glenn Greenwald), “was shot in the neck and killed,’ bleeding to death over the course of two hours. ‘Why kill children?’ the grandfather asked. ‘This is the new (U.S.) administration — it’s very sad, a big crime.”

Obviously a presidential administration’s rhetoric doesn’t always match reality. Spicer refused to comment on the 8-year-old girl’s death. If what the grandfather says is true as reported by Scahill, obviously that death was more than just a casualty. Even though Attorney General Eric Holder told Sen. Paul in a letter that targeting U.S. citizens was illegal, the administration did not hide the fact that Anwar al-Awlaki was a target (or his son) and an administration memo published in 2014 read, “We do not believe that al-Aulaqi’s U.S. citizenship imposes constitutional limitations that would preclude the contemplated lethal action.”

Still, the Trump administration has apparently made the decision to go on record swiftly as to what their official policy is, and this time it didn’t take a filibuster to provoke it.

But this small gesture doesn’t obscure this problematic aspect of American foreign policy, something that is not purely a product of the last president or the new one, but more broadly how the U.S. continues to conduct its business abroad.

“This is why it is crucial that — as urgent and valid protests erupt against Trump’s abuses — we not permit recent history to be whitewashed, or long-standing U.S. savagery to be deceitfully depicted as new Trumpian aberrations, or the war on terror framework engendering these new assaults to be forgotten,” Glenn Greenwald wrote on Monday.

“That does not become less infuriating — Yemeni civilians are not less dead — because these policies and the war theories in which they are rooted began before the inauguration of Donald Trump,” Greenwald said.

“It’s not just Trump but this mentality and framework that need vehement opposition,” Greenwald implored.

White House Press Secretary Sean Spicer told reporters that “no American citizen will ever be targeted” during his news briefing on Tuesday. He was contradicted hours later by one of his deputies, Sarah Huckabee Sanders, who said Trump would maintain former President Barack Obama’s policy permitting U.S. citizens to be targeted in strikes under certain circumstances.

“U.S. policy regarding the possible targeting of American citizens has not changed,” Huckabee Sanders said in a statement.

Disclosure: I co-authored the 2011 book the Tea Party Goes to Washington with Sen. Rand Paul.