On Wednesday, McCain got mad about it.

“You are achieving the objectives of Vladimir Putin… trying to dismember this small country which has already been the subject an attempted coup,” McCain said on the senate floor Wednesday, his comments directed at Paul. McCain continued, “If they object, they are now carrying out the desires and ambitions of Vladimir Putin and I do not say that lightly.”

“They” being Sen. Paul and Lee.

McCain asked for a unanimous consent vote, Paul objected and then left the senate floor. Sen. McCain didn’t like that either.

“I note the senator from Kentucky leaving the floor without justification or any rationale for the action he has just taken,” McCain said. “That is really remarkable, that a senator blocking a treaty that is supported by the overwhelming number, perhaps 98—at least—of his colleagues would come to the floor and object and walk away.”

Then McCain continued to his anti-Paul comments: “The only conclusion you can draw when he walks away is he has no justification for his objection to having a small nation be part of NATO that is under assault from the Russians.”

“So I repeat again, the senator from Kentucky is now working for Vladimir Putin,” McCain said.

The Cato Institute’s Doug Bandow wrote last week, “The postage stamp country of Montenegro expected to be rushed into NATO during Washington’s lame duck period before the unpredictable Donald Trump became president. But Senators Rand Paul and Mike Lee, to their credit more concerned about America than wannabe foreign dependents, blocked ratification of the ratification resolution.”

“The U.S. should stop handing out security guarantees like some hotels distribute chocolates on pillows,” Bandow says. “NATO already is too big and has added countries that never belonged in the alliance.”

“Instead of regurgitating the conventional wisdom, the Trump administration should insist that U.S. foreign policy be based on a more realistic perspective focused on America’s interests,” Bandow added.

Trump expressed strong support for NATO in his first speech before Congress in February, but also worried that current member states are not pulling their weight. In January, Trump told a German newspaper that NATO was “obsolete.”

McCain has also long advocated bringing Georgia into NATO. During a conflict between that country and Russia in 2008, the then Republican presidential nominee declared that “today, we are all Georgians.” McCain has said the same of Ukraine. McCain’s top foreign policy adviser Randy Scheunemann during the senator’s presidential bid was later discovered to be a lobbyist for the Georgian government.

“Bringing in Georgia and Ukraine (into NATO) would be even more dangerous, since both have been involved in shooting conflicts with Russia,” Bandow observed.

UPDATE: Sen Paul said in a statement released by his office via email on Wednesday, “Currently, the United States has troops in dozens of countries and is actively fighting in Iraq, Syria, Libya, and Yemen (with the occasional drone strike in Pakistan). In addition, the United States is pledged to defend 28 countries in NATO.”

“It is unwise to expand the monetary and military obligations of the United States given the burden of our $20 trillion debt,” Paul’s statement read. 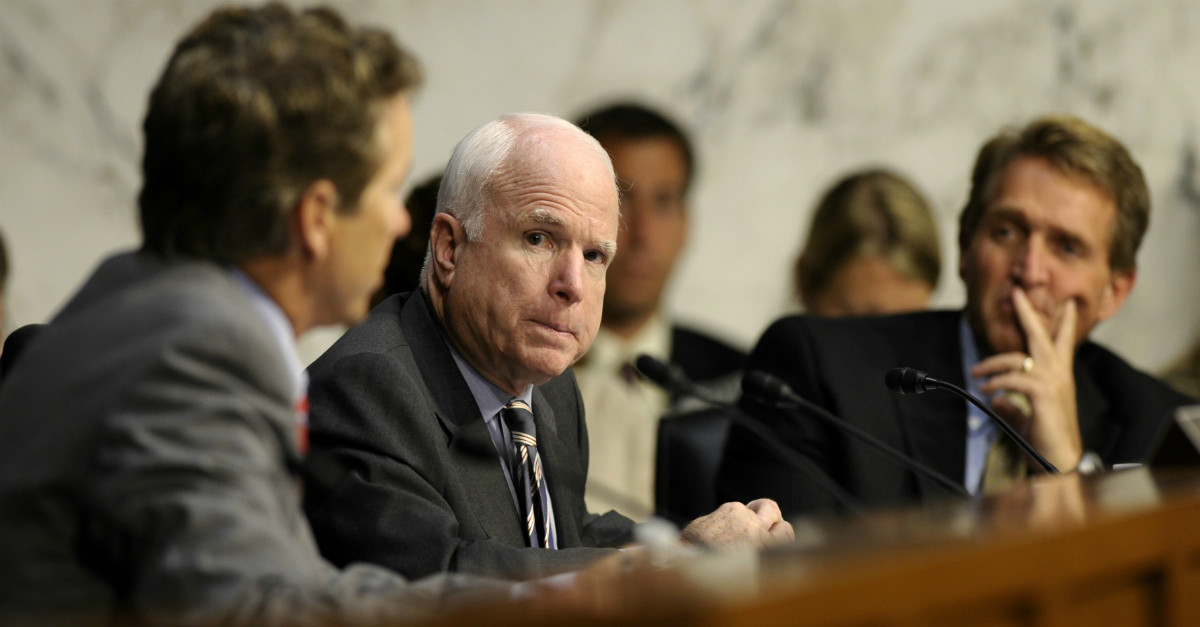