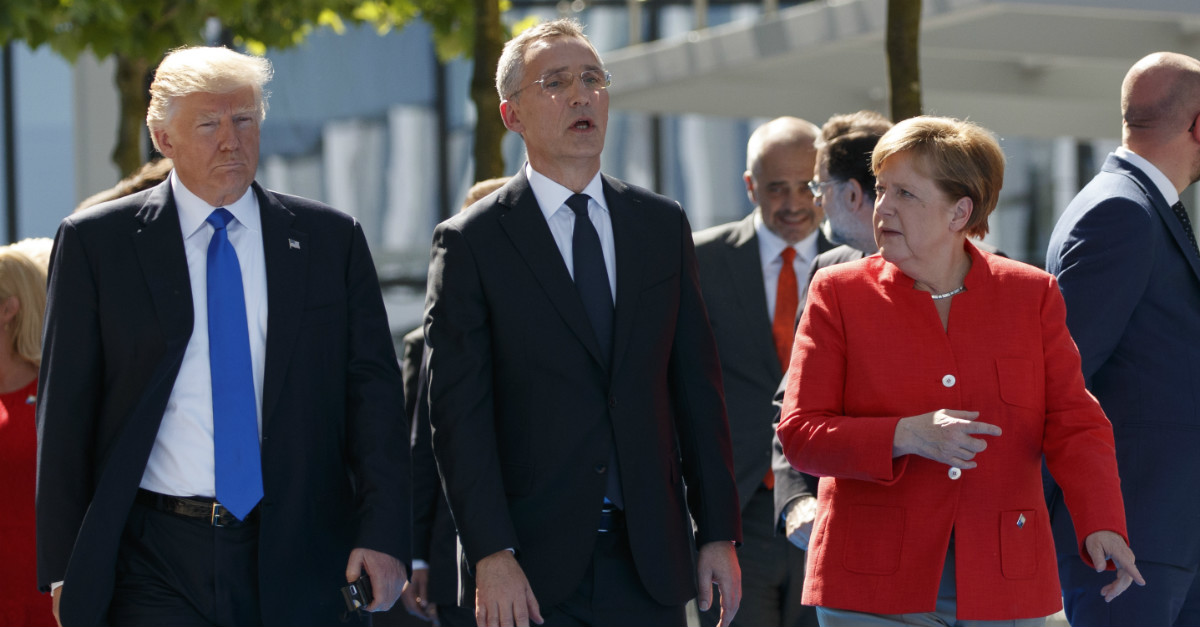 President Trump’s much-trumpeted NATO speech in Brussels yesterday clocked in at about 900 words, quite short compared to the average length of a presidential address. State of the Unions, for instance, can last for well over an hour. Speeches during the annual U.N. General Assembly session can go on for far longer depending on the themes that the president wants to cover.

Not so for Trump’s address in front of the glistening new NATO headquarters that isn’t even open yet. The entire thing was over and done with in about five minutes.

The address, to commemorate the new building and the museum inside of it, was an occasion meant to showcase to the world that NATO has made it through tragedy unscathed and intact, even as new challenges appear on the horizon. President Trump had a few lines acknowledging the importance of NATO as an institution but devoted most of his time to castigating member states who fail to meet the alliance’s spending benchmarks on national defense. Everybody could see this lecture coming, and yet, some very prominent figures in the American foreign policy bureaucracy pretended they were surprised Trump would point to the NATO imbalance in public.

RELATED: Out of my way! Trump appears to shove a prime minister as he makes his way to the front of the group

The headlines on Trump’s first day in Brussels concentrated on the usual aggressive handshakes, the president’s alpha-male behavior with the Montenegrin prime minister who at one point he appeared to push out of his way, and the absence of a full-throated U.S. pledge to uphold Article 5 of the NATO treaty. Lost in the conversation and the optics, however, was any mention whatsoever of the war in Afghanistan—a curious omission given the fact that this is the longest conflict NATO has ever been a participant in. No other war, not Kosovo, Iraq, or Libya, comes close.

Indeed, at the same time NATO delegates were meeting in Brussels, 13,000 NATO soldiers were operating on Afghan soil. Over 1,000 non-American NATO troops have been killed since the alliance rode into Afghanistan with the U.S. shortly after the 9/11 attacks, yet heads of state barely mentioned the subject at all.

Based on all the statistics provided by U.S. watchdogs and the U.N. mission, the war in Afghanistan is deteriorating. This is evident in the routine ambushes the Afghan army suffers every week, the number of Afghans who are now within the Taliban’s reach, and the presence of safe havens in Pakistan that remain untouched and have acted as an accelerant for the conflict. Washington and Brussels will soon have to determine whether thousands of additional troops should be deployed to, once again, save the Afghan security forces from collapse, and, if so, how many of those troops will be non-American. A decision is likely imminent in a few weeks, and one would hope that Trump and his NATO colleagues spent some time during their meetings discussing it.

It would have been nice to hear some of them talk about Afghanistan in public, even if only for a few seconds. Instead, what we received were mostly pro forma photo ops—even if Trump, as usual, didn’t play by the rules.