No, Tom Cotton, the Iran deal isn’t dead—and we’re better off because of it 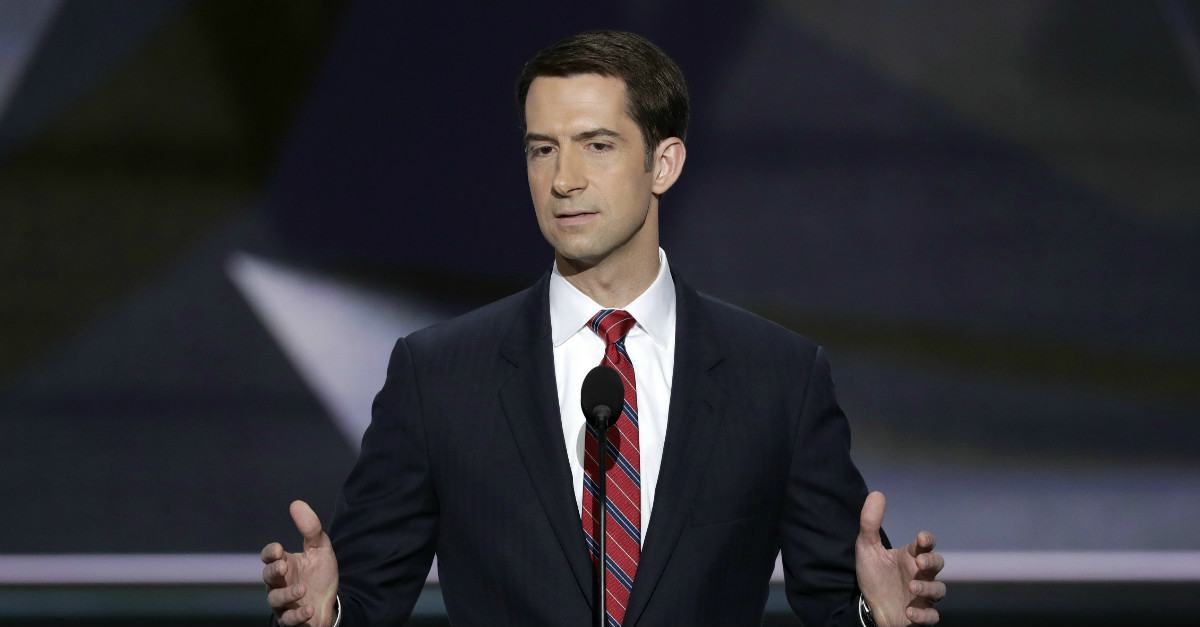 Tom Cotton, the Arkansas senator and noted sender of passive-aggressive letters, is on a tear once again. The reason is the usual one: President Obama’s nuclear agreement with Iran. “I believe the Iran deal is dead,” he told the Washington Examiner. “Donald Trump is going to be much more forceful on the terms of the nuclear deal itself, and that itself may cause the ayatollahs to walk away.” He added: “I don’t expect there’s going to be many more Iranian boats chasing after ours, or aircraft buzzing our airplanes.”

Cotton isn’t exactly the most honest broker when it comes to the Iran deal, given that he pronounced back in 2015 that it was his explicit intention to squash any negotiations with Tehran before they were even allowed to finish. He’s a fanatic, in other words. His latest statement is signaling, an attempt to indicate to the infinitely malleable and easily persuadable Trump that, hey man, you’re tougher than that knees-knocking Obama, aren’t you? No way you’re going to let this pathetic Iran agreement stand. But I’m just thinking out loud here…

Trump may follow through on his campaign pledge and reopen the Iran deal. Or he may decide plunging into the dense details of the JCPOA isn’t worth it, especially since the Iranians are refusing to renegotiate and British Prime Minister Theresa May, whom Trump recently compared to Margaret Thatcher, isn’t keen on fiddling with the agreement either. That last sentence is admittedly me signaling Trump (on the infinitesimally small chance that he reads this) because I favor the Iran deal. Contra Cotton, it’s not dead; it’s working spectacularly well.

The campaign against the Iran agreement has been one of the most flabbergastingly deceptive political operations in recent history. Every single negative headline involving Tehran is hoisted up the flagpole as confirmation that the deal isn’t working. It’s as though Iran was supposed to morph into Switzerland overnight, abolishing its theocracy and shifting the entirety of its economy to chocolate imports. In fact, the deal’s goal was limited and narrow: preventing Iran from obtaining a nuclear weapon—and on that it’s been a success. Iran has either modified or dismantled its nuclear facilities, shipped almost all of its atomic fuel out of the country, and buckled under the most punitive inspections regime in history. It’s continued to comply with the terms of the deal over the past year, according to the IAEA. And recently, Iran even assented to reducing its enriched uranium stockpile well below what’s required.

Critics of the deal never acknowledge any of that. Instead, they parade around the other bad things Iran has done—its involvement in the Syrian Civil War, its ballistic missile tests, those boats Cotton mentioned—and behaves as though they constitute violations of the JCPOA even though they do not. Again, the narrow goal was to prevent Iran from getting a nuke, and all the evidence suggests that we have. If we want further change, we should pursue further negotiations, not prod the Iranians back into the talons of their radicals. Iran’s (relative) reformists won an election last year that was essentially a referendum on the JCPOA. If we pull the plug anyway, it will discredit them and empower those same hardliners tagging our ships.

RELATED: Tom Cotton taunts Iran negotiator for not serving in combat. Does he really want to go there?

Imagine if Gerald Ford had decided to scuttle SALT I because the Soviet Union didn’t instantaneously withdraw from the Baltics or Ronald Reagan had refused to meet with Mikhail Gorbachev because the KGB was still in existence. The point of diplomacy is that it takes time. Individual treaties are mere steps on a longer continuum. Setbacks are frequent; they sometimes even outnumber successes.

Tom Cotton, the trembling id of the Weekly Standard editorial staff, who once advocated for punishing the family members of sanctions violators, lacks that requisite patience. He can continue to lob bombs all he likes, both rhetorical and, in his fantasies, actual. But he shouldn’t try to buffalo the president into mutilating an agreement that’s made us safer.