On Memorial Day we remember our fallen soldiers, but shouldn’t we do more to remember them every day? 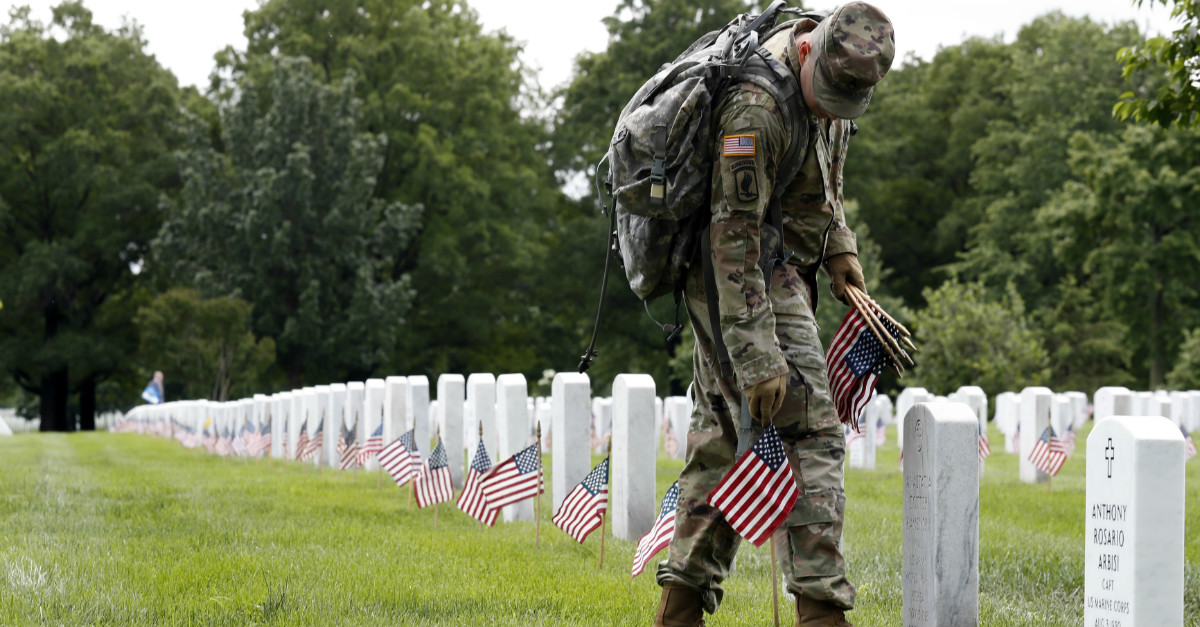 AP Photo/Alex Brandon
U.S. Army Staff Sgt. James Warner, of the 3d U.S. Infantry Regiment (The Old Guard) places a flag at a headstone for "Flags In," at Arlington National Cemetery, Thursday, May 25, 2017, in Arlington, Va. Soldiers are placing nearly a quarter of a million American flags at the headstones in the cemetery in a Memorial Day tradition. (AP Photo/Alex Brandon)

On Memorial Day, we pay tribute to those who died defending our country. From the Revolutionary War to today, over a million American soldiers have lost their lives. The least we can do is remember and honor their sacrifice.

But do we remember them enough?

The two most recent deaths, a month ago, were 22-year-old Joshua Rodgers of Bloomington, Ill., and Cameron Thomas, 23, of Kettering, Ohio. Joshua grew up wanting to be an Army Ranger. So did Cameron. ?It?s all he lived and breathed,? said Cameron?s father.

The war in which these soldiers lost their lives began when they were 6 and 7 years old, respectively. A significant U.S. presence in Afghanistan has endured for 16 years. Right now, the Pentagon wants 5,000 more troops and President Trump is considering it.

Why did these two young men and over 2,000 other Americans have to lose their lives a decade-and-a-half after the U.S. accomplished its original mission of going after those who aided the 9/11 terrorists?

When does America?s longest war in its history end? Does it ever?

I?m not asking these questions to be insensitive. I?m asking because I fear they are not asked enough, or loudly enough, by the general public. On this day each year, I can?t help but couple the recognition of the ultimate selflessness of our noble fighters with the question of whether these brave men and women were put in harm?s way by our government for prudent reasons.

It is not disrespectful, nor should it be considered such, to ask. It’s actually more disrespectful not to ask.

We originally went there to oust the Taliban, after they refused to hand over Osama bin Laden in the aftermath of the 9/11 attacks. But in a textbook illustration of “mission creep,” that original purpose soon morphed into a broad and open-ended and largely unsuccessful effort to support Afghanistan?s democratic transformation.

That transformation isn?t happening. We are losing in Afghanistan and have been for many years.

?The United States has been fighting in Afghanistan for so long that it is easy to forget why we?re there,? Walt writes. ?In fact, I?m not sure I know anymore.?

Most Americans have forgotten we?re still at war there. President Trump did not even mention Afghanistan in his recent NATO speech, nor did he speak about our soldiers in Iraq, Syria and Yemen.

We forget. ?When it comes to wars, we Americans have a selective memory,? author and veteran Andrew Bacevich observed at the New York Times in March. ?The Afghan war, dating from October 2001, has earned the distinction of having been forgotten while still underway.?

We should also remember the fallen weren?t just uniforms. Today, we remember these heroes broadly and thus vaguely, but rarely, outside of the military families affected, do we think about them specifically. Not enough consider the real personal sacrifice of flesh and blood Americans who have found themselves in conflicts not of their making. Part of this blindness is human nature. ?Humankind cannot bear very much reality,? T.S. Eliot observed, and obviously we as individuals can barely absorb the totality of our own troubles, much less our country?s or the world?s.

But many of us would also prefer not to know. We go about our daily lives assuming our leaders are making the right decisions and have the right motives or incentives, yet we?re also painfully aware this is often not true in many other areas of government policy. Events that happen an ocean away also make them easier to ignore.

So we simply don?t think about what?s happening.

It is a soldier?s job to do his or her duty. But it is our duty, as citizens, to make sure the leaders we choose possess sound judgment. Of course we must defend our country, but is that really what?s happening in Afghanistan today, after all these years?

Real lives are at stake in these policy decisions. Our military members and their families know this better than anyone.

We should ask more questions about the wars our leaders seek, on Memorial Day and every other.