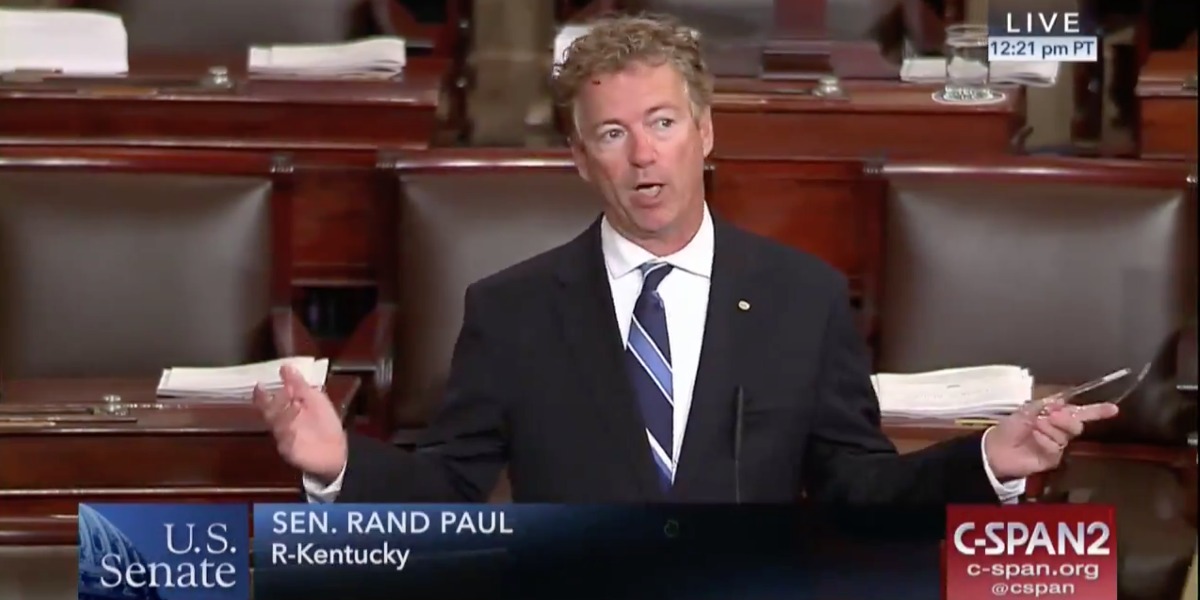 Sen. Rand Paul has been holding up the National Defense Authorization Act (NDAA) in the Senate this week, demanding that his amendment that would sunset the Authorizations of the Use of Force (AUMF) passed back in 2001 and 2002 get a vote. Those two AUMFs have been used for every U.S. military action since 9/11, most of which have been separate from targeting al-Qaeda and their allies.

For his efforts, Paul was given a block of time on Tuesday to challenge the senate on it’s refusal to debate or reconsider AUMF.

“I rise today to oppose unauthorized, undeclared, and un-Constitutional War,” Paul said in his speech. “What we have today is basically unlimited war ? war anywhere, anytime, any place on the globe.’

RARE POV: Rand Paul holds up defense bill: ?I sit silently to protest the thousands of American soldiers who have died?

Sen. Paul noted that American presidents currently have unlimited war powers due to AUMF and have for the last 16 years. Presidents Bush and Obama had blank checks for war, and now so does President Trump. Paul wonders when – or if – Congress ever plans on reclaiming those war powers that constitutionally belong to Congress, not the executive branch.

“This vote will be to sunset, in 6 months, the 2001 and 2002 authorizations for the use of military force,” Paul said. “No one with an ounce of intellectual honesty believes these authorizations allow current wars we fight in 7 countries.”

Paul also swung at both Presidents Obama and Trump for running as antiwar candidates only to support the same type of military interventionism via executive order both men had criticized during their campaigns.

“Former President Obama as a candidate agreed that a President could not use military force without Congress? permission unless we were under imminent attack,” Paul said. “President Obama bombed 7 different countries without congressional authority.”

“Candidate Trump repeatedly argued that the Afghan War was a disaster and should end,” Paul said of the current president. “Once in the White House, however, President Trump is escalating the war in Afghanistan just as President Obama did.”

On Monday, Paul wrote an op-ed for Rare explaining why he believed AUMF should be rescinded, and that a robust foreign policy debate was desperately needed.

On Tuesday on the senate floor, he challenged his fellow congressman.

Will they stand for the rule of law? Will the senators stand for congressional authority for war? pic.twitter.com/F6IorS1t3R

The senator also mentioned specific conflicts the U.S. has been involved in abroad and demanded his colleagues answer for them.

Today's vote is a vote on whether congress will step up and do its job. pic.twitter.com/Zh0nNyrfpj

“Today?s vote,” Paul said “is a vote on whether Congress will step up and do its job.”

After his floor speech, Paul was asked by a reporter if he planned on blocking every other amendment if his AUMF is not included, to which he responded, “Yes,” according to The Hill.

In June, Rep. Barbara Lee (D-Ca.) led a similar battle against AUMF in the House, and Republican leadership eventually bent to her wishes.  “At long last, I am pleased that my Democratic and Republican colleagues supported my effort to put an end to the overly broad blank check for war that is the 2001 AUMF,” Lee said in a statement.

“For years now, some senators and candidates have lamented that they voted for the Iraq War,” Paul said on Tuesday. “Today?s vote will be remembered as the first vote in 16 years on whether to continue fighting everywhere, all-the-time without ever having the renewed approval of Congress.”

The Senate plans to vote on NDAA on Wednesday.