Rand Paul on Yemen: Are U.S. interventions doing more harm than good? Are we actually any safer? 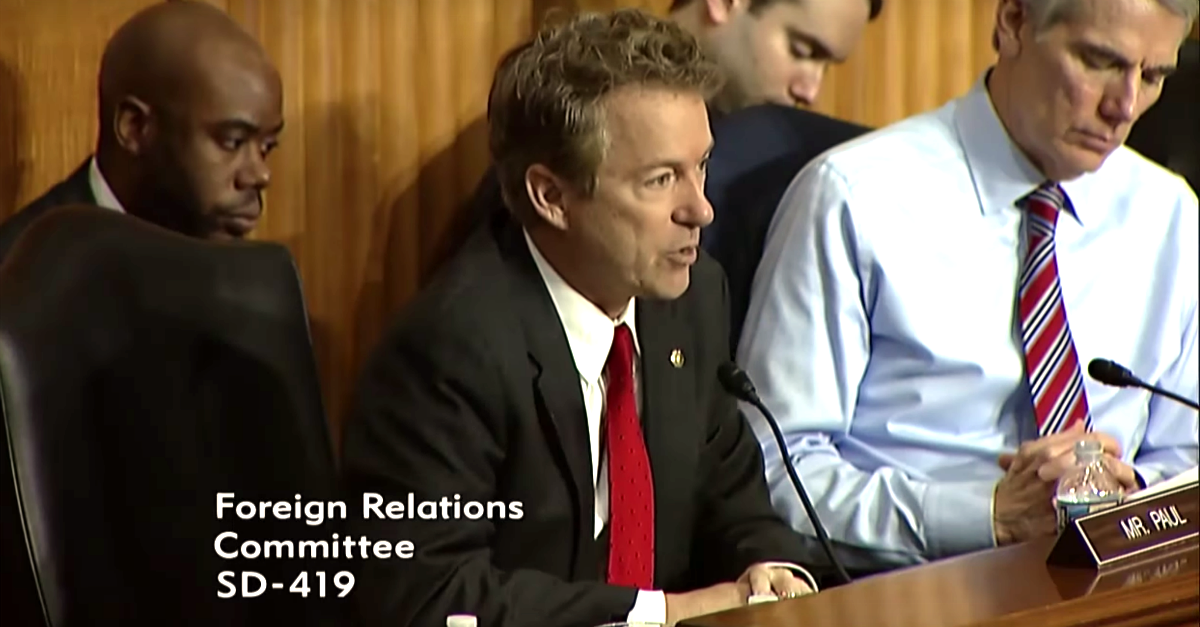 In a hearing for the Senate Foreign Relations Committee on Thursday, Sen. Rand Paul (R-Ky.) offered a much-needed critique of the interventionist foreign policy pursued by the bipartisan establishment in Washington for the better part of two decades.

Paul used U.S. intervention in Yemen — a war many Americans do not even know our government is fighting — as the launching pad for his argument. Central to Paul’s comments, posed as a question to Dr. Dafna H. Rand of the National Defense University, who was testifying, is the issue of whether the United States’ present foreign policy is dictated more by what we can do than what we should do.

“The United States has the technical ability to kill anyone anywhere anytime,” Paul began. Yet, he continued, “just because we can doesn’t mean we should, and I think we don’t have enough discussion about the practical ramifications of whether or not we kill more terrorists than we create.” He continued:

I think Yemen is a perfect example of this. We’re supplying the Saudis with bombs, refueling the planes, picking the targets. I assume that we didn’t pick the target of a funeral procession, but we wounded 500 people and 140 people — I say “we;” the Saudis did it, but with our armaments. You think that Yemenis don’t know where the bombs are coming from?

We recently had a raid — and I don’t blame our soldiers. I mean, I have members of my family who actively serve. They do what they’re told. But we’re the policymakers. I mean, we sent them into Yemen. I’ve still not been told while we went to Yemen. Someone’s got to make a decision: Did we — in killing a, you know, a few of the al Qaeda [members] in that village — was that worth the fact that we had to kill women and children, or women and children were inadvertently killed in that, including an American citizen?

I guess my question to Dr. Rand is: Do you think we’re adequately weighing whether we’re creating more terrorists than we kill, whether we’re doing more good than we are doing harm, whether we are safer or more risk? I think your testimony was at least reasoned in the sense that [it asked] will we be better off. Yes, we can take a new port in Yemen. We can do anything. But in the end, will we be safer, better off if we continue the way we’re continuing?

In her response to Paul, Rand largely agreed with his point, noting that some military actions may be lawful without being wise.

She’s right, but since Congress has not authorized U.S. military action in Yemen at all, I’d suggest it is unlawful — specifically, unconstitutional — too. Though the executive branch has, under Presidents Obama and Trump alike, claimed authority to intervene in Yemen under the Authorization for Use of Military Force passed in the wake of 9/11, the Yemeni civil war has nothing to do with 9/11; and al Qaeda in the Arabian Peninsula (AQAP), the branch of al Qaeda in Yemen, did not exist until eight years after 9/11.

Unless Congress magically knew the future back in 2001 — and I’m going to go out on a limb here and say that is not what happened — this war is illegal and unwise at once.

It is also mostly unquestioned in Washington, which is why Paul’s questions here are so important. This willingness to ask questions about our foreign policy that others won’t is why, whatever our differences, I’m glad to see Paul back in the Senate for at least six more years.