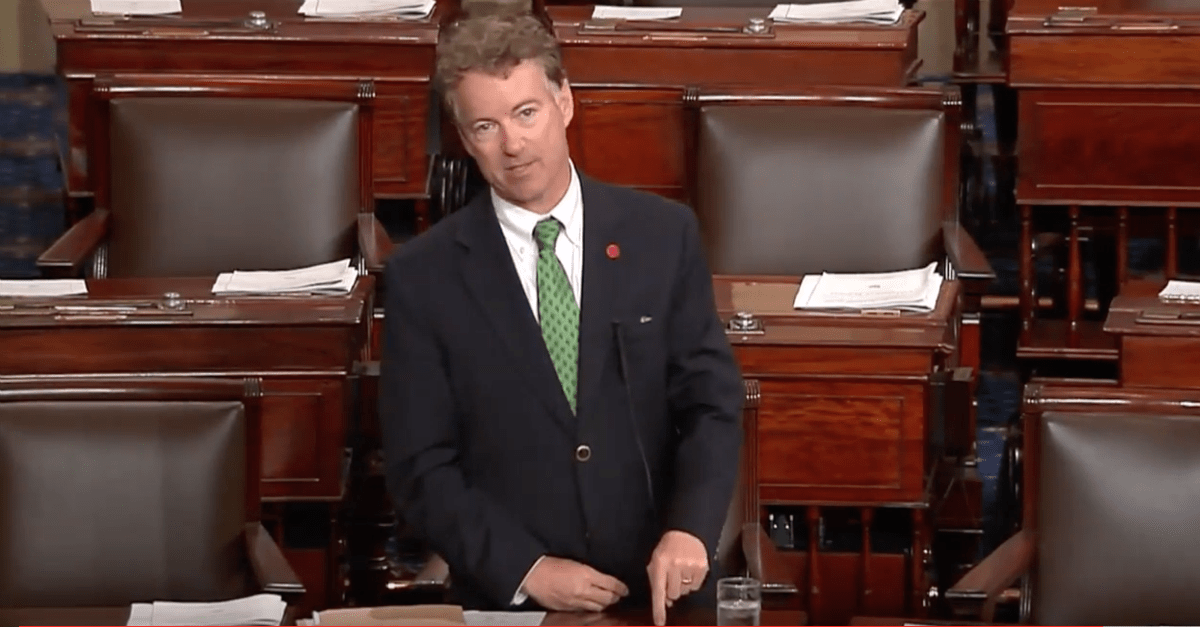 On Monday, the Senate voted to move forward on admitting the Balkan nation of Montenegro into NATO, which would make the U.S. responsible for that nation’s defense if attacked. The vote was 97-2.

The only two senators to vote “no” were Republicans Mike Lee and Rand Paul.

Sen. Paul took to the senate floor to loudly proclaim why he thought giving yet another foreign nation a U.S.-led war guarantee via NATO without any congressional debate was dangerous.

“Nobody wanted to have this debate,” Paul said. “They want to rubber stamp… and they want to send your kids to war with no debate.”

Nobody wanted to have this debate. They want to rubber stamp. They want no debates and they want to send your kids to war pic.twitter.com/BcBc8AcftP

“President Trump said in his inaugural address that we defend other nations’ borders while refusing to defend our own,” Paul noted, giving a nod to the president’s campaign promises to put “America first.”

“I think he was right,” Paul said.

“Today the question is will we add another commitment to defend yet another foreign country?” Paul asked. “For decades NATO has been an organization where the U.S. disproportionately spends our blood and our treasure. The other NATO countries have largely hitched a ride on a U.S. train that subsidizes their defenses and allows them to direct their revenues to their own domestic concerns.”

“In short,” Paul said, “Uncle Sam is the ‘Uncle Patsy’ for the rest of the world.”

For decades nato has been an organization where the U.S. Disproportionately spends our blood and our treasure. pic.twitter.com/mB8Nsl2zcx

Paul offered an amendment that stated that even if Montenegro were admitted to NATO, Congress must debate and vote on a formal declaration of war before sending American troops to defend the small Eastern European nation.

“We could have one 15 minute vote on an amendment,” Paul said. “But they don’t want to debate it because they’re embarrassed that they’re sending your sons and daughters to war without ever debating or voting on it.”

Paul continued, “When I talk to the young men and women who serve, you know what they tell me? They want someone to stand up and have a debate.”

“The people here who are these mouthpieces for war,” Paul said, waving his hand to seemingly indict the senate chamber, “who think every soldier wants to go to war, go out and meet the soldiers and ask them whether they want the civilian senators to debate and have a formal declaration of war.”