House Speaker Paul Ryan (R-Wisc.) sent out a tweet Friday night encouraging full funding of the Defense Department. “To ensure our military has the tools needed to complete their missions, and is able to stay one step ahead of the rest of the world, we need to fully fund the @DeptOfDefense,” Ryan wrote.

To ensure our military has the tools needed to complete their missions, and is able to stay one step ahead of the rest of the world, we need to fully fund the @DeptOfDefense.

But the Speaker’s GOP colleague Rep. Thomas Massie (R-Ky.) suggested that a debate should be held to question how that spending might be used.

“Let’s have a debate and vote on whether it’s in America’s interests to continue into the 17th year of the war in Afghanistan,” Massie tweeted. “$50 billion is the cost next year! Neither Germany nor the UK spends that much on its entire military.” 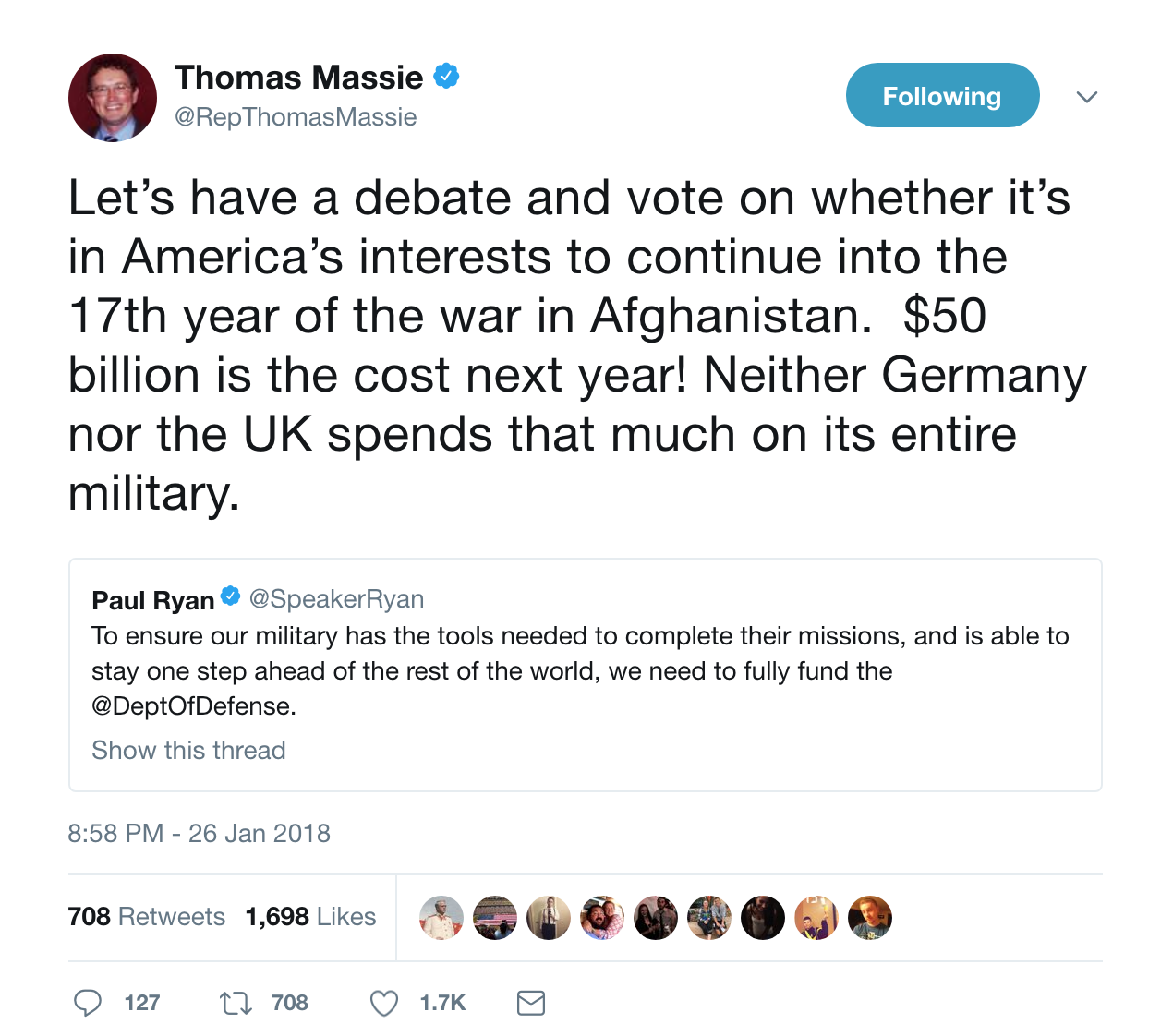 While Ryan and GOP leadership have tended to be more hawkish when it comes to foreign intervention to military spending, the libertarian-leaning Massie has consistently questioned U.S. foreign policy, including its cost.

Cut undeclared wars and foreign aid by 100%. Then cut everything else 1% per year for five years.

Massie’s favored cuts to foreign aid in the House mirror those of his fellow Kentuckian Sen. Rand Paul (R-Ky.) in the Senate, who this month called for cutting U.S. aid to Pakistan and reallocating those funds for domestic infrastructure.

“In extraordinary circumstances, it may be in our national interest to temporarily provide foreign aid to allies in need,” Massie’s website reads. “Foreign aid provided to a specific country should be subject to an up-or-down vote on its own merits, not bundled in an aid bill for multiple countries.”

Massie’s site added. “We should never provide foreign aid to countries hostile to us or our allies.”

Pakistan’s perceived hostility toward the U.S. is also part of Sen. Paul’s reasoning for why U.S. aid to that country should end.