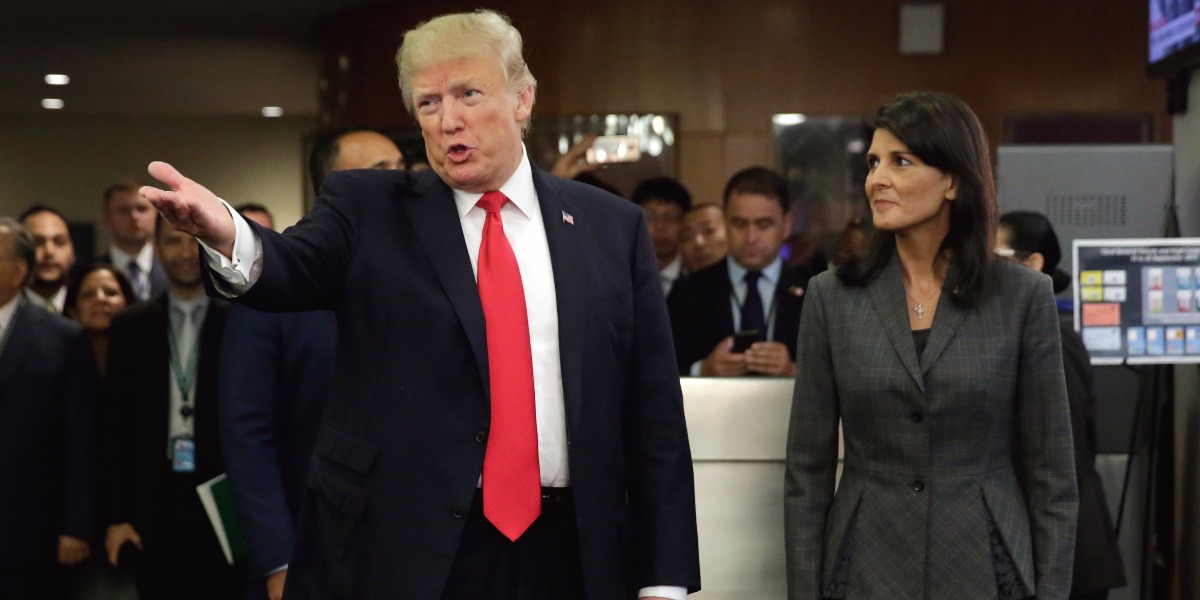 “I don’t know what’s going to happen with the [Iran] deal,” President Trump said in his Fox interview with Maria Bartiromo this week. “We’ll see what happens.”

North Korea will see what happens, too, in the aftermath of Trump’s recent refusal to certify that the Iran deal is in U.S. interests, an announcement he made while imposing new non-nuclear sanctions, and urging Congress to modify U.S. law to make the agreement’s terms more stringent. The White House is aware this Iran shake-up sends a message to Pyongyang, but it is disconcerting and dangerous how badly the administration seems to misunderstand what that message says.

Consider the testimony of U.S. Ambassador to the United Nations Nikki Haley, who made the rounds of Sunday shows two days after Trump’s decertification. Asked by NBC’s Chuck Todd what incentive North Korean leader Kim Jong-un would have to “strike a deal with the world community if the United States walks away from Iran,” Haley declared, “[T]he whole reason we’re looking at this Iran agreement is because of North Korea.”

What this communicates to the Kim regime, she argued, is, “Don’t expect us to engage in a bad deal. And also, if at any point we do come up with something, expect us to follow through with it. Expect us to hold you accountable. You’re not just going to have a free-for-all.” To the international community more broadly, Haley added, Trump’s decertification says, “Look, this is a deal. You either comply with it or you don’t.” In another interview with ABC’s George Stephanopoulos the same day, Haley doubled down on this line of reasoning, insisting decertification proves the United States is a hawk-eyed, by-the-book negotiator which can be trusted to be tough and fair.

The trouble is, decertification communicates nothing of the sort. By Haley’s own repeated admission (and according to other observers, including Defense Secretary James Mattis and Joint Chiefs of Staff chair Gen. Joseph Dunford), Tehran — while hardly a model government in other regards — is in full compliance with deal. Haley protests that reworking the deal is necessary because Iran is doing “other bad things,” but her reasoning doesn’t hold up.

If Mattis, Dunford and other observers are right that Iran is meeting its end of the bargain, the right move here is to use JCPOA as a foundation of trust for further diplomacy. Chipping away at that foundation is exactly the wrong decision.

From North Korea’s perspective, this is a glaring announcement that coming to the negotiating table with America in good faith is a fool’s errand. If “the U.S. were to withdraw from the Iran deal, it would allow North Korea to credibly argue that any agreement reached with the Trump administration was not worthwhile,” writes Troy Stangarone of the Korea Economic Institute, a think tank affiliated with the South Korean government, “because a new administration could simply try to force North Korea to renegotiate the agreement to address other issues, even if it was in full compliance with the nuclear deal.”

If universally recognized compliance is not enough to prevent Washington from changing the terms of an agreement, what’s the use of agreeing in the first place?

It is thus unsurprising that Pyongyang already announced it is uninterested in talks until further intercontinental ballistic missile development is complete. “[B]efore we can engage in diplomacy with the Trump administration,” a North Korean official said, “we want to send a clear message that the DPRK has a reliable defensive and offensive capability to counter any aggression from the United States.” Pyongyang has clearly decided Washington’s word is not her bond.

That’s not an irrational conclusion, however the White House tries to spin things. For a regime fixated on survival, the possibility that the United States would try to exact new concessions after a deal is done may be enough to preclude constructive diplomacy altogether.

And as much as Haley, Trump himself, and other members of the administration may be frustrated with the long and complicated history of U.S.-North Korea negotiations, their responsibility to American security means they must heed Mattis’ call to deal with North Korea in “a diplomatically effective manner.” The alternative — catastrophic nuclear war in which the certainty of U.S. victory does not negate the enormous suffering such a conflict will entail — demands it.