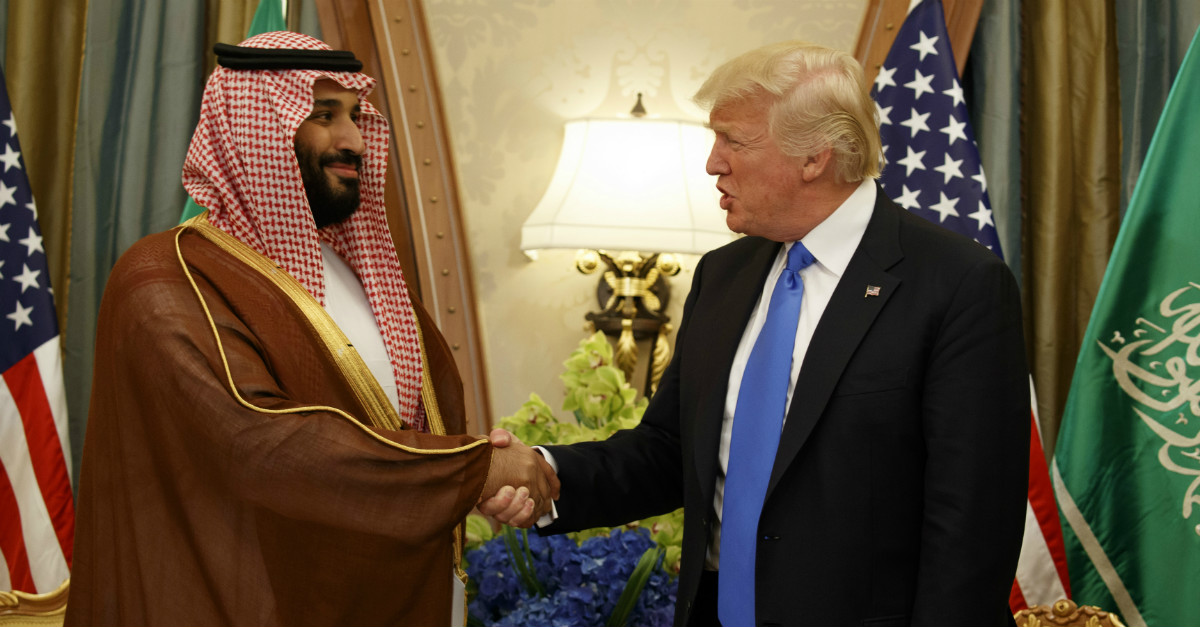 Experts in Washington are quick to deplore Syrian dictator Bashar al-Assad. They’re right to do so: Assad’s government has killed hundreds of thousands in a murder campaign against its own people using weapons that fall outside the acceptable boundaries of warfare.

In Yemen, Saudi Arabia is doing the exact same thing, drawing on cluster bombs and other indiscriminate munitions to smoke out a Shiite rebel group called the Houthis in a civil war whose main casualty has been the Yemeni people and whose main beneficiary has been al-Qaeda. United Nations officials and groups like Human Rights Watch have already warned that the Saudis may have committed war crimes and that America may be complicit for providing them with weapons.

Yet the usual critics are silent. In fact, D.C. is about to give the Saudis even more.

Donald Trump, during his recent joyride through Asia and Europe, made a long stop in Saudi Arabia where, in between dancing with the royals and placing his hands on a sinister-looking orb, he inked a $350 billion arms deal. Jared Kushner, the president’s son-in-law and a man thoroughly lacking in Middle East expertise, negotiated the agreement and reportedly oiled it bit with the defense contractors. There’s plenty in there for the Saudis to like: more jets, more tanks, more laser-guided bombs.

Senator Rand Paul, Congress’s most valuable rapid-response system against foreign policy nonsense, immediately demanded a vote on the arms deal. He’s entitled to do so: the Arms Expert Control Act allows any member of Congress to force legislative consideration of a weapons agreement negotiated by the executive within 10 days of its being signed.

RELATED: While Donald Trump boogied with Saudi princes, Iran was voting for openness and peace

“Selling military weapons to questionable allies is not in our national security interest,” Paul wrote at Breitbart. “At some point, the United States must stop and realize that we are fueling an arms race in the Middle East.”

He’s right, but if the past is any indication, Congress will ignore his good sense and green-light the Saudi deal anyway, just as they unthinkingly approved a bundle of F-16 jets to Egypt’s erstwhile Muslim Brotherhood government back in 2013 and a package of tanks and armored vehicles to the Saudis last year. Most senators have little appetite for oversight of America’s schizophrenic foreign policy. With Trump in the White House and Republicans in control of Congress, they’re even more recalcitrant than usual.

But how many bodies can their blind eye avoid? United States-supplied weapons were used during a Saudi strike on a marketplace in Mastaba, Yemen that slaughtered 97 civilians, including 25 children. Photographs also showed remnants of American bombs in the wreckage of a Yemeni funeral—that Saudi attack killed 140. In addition to massacring the innocent and bolstering terrorism in Yemen, the Saudis have used their military might to arm jihadist groups in Syria, crush democratic protests in Bahrain, and suppress impoverished Shias within their own borders.

Yet on the weapons flow, flushing defense contractor pockets, destabilizing the Middle East.

RELATED: Rand Paul: The U.S. should not fund Saudi Arabia’s war on Yemen

Saudi government coffers are relatively bare right now thanks to plunging oil revenues. That raises another important question: how can Riyadh afford a $350 billion arms purchase? The answer is that they probably can’t, yet they chose to ink the deal anyway. Why? Because in addition to providing them with new weapons of war, the agreement has deep geopolitical symbolism. It shows that the United States stands with the Saudis in their fruitless cold war against Iran.

The ayatollahs in Iran do indeed need to be checked, and Saudi Arabia fills that role, but underlying their conflict is Islam’s interminable sectarianism—the Saudis are Sunni, the Iranians Shia—whose resultant holy wars have torn up the Middle East. The United States has no business taking sides in this internecine struggle. Our interest is in balance between the two powers, not linking arms with the Saudis against the Iranians and thus the Sunnis against the Shias.

Saudi Arabia has been trying to halt Iranian expansion since the Islamic Revolution in 1979. Among other tactics, they exported Wahhabism, their brand of Sunni Islamic radicalism, across the Middle East to counter budding Shiite fervor, which helped germinate al-Qaeda. From an American vantage point, this continuing clash has accomplished little except to create space in which extremism thrives, yet we masochistically fuel it anyway, with weapons, money, and unquestioning fealty to the Saudis.

Enough of this. It’s time for a foreign policy realignment in the Middle East. Congress should start right now by telling President Trump and the Saudis: “No deal.”