The Saudi blockade of Yemen is starving kids and killing thousands, so why is Washington still defending it? 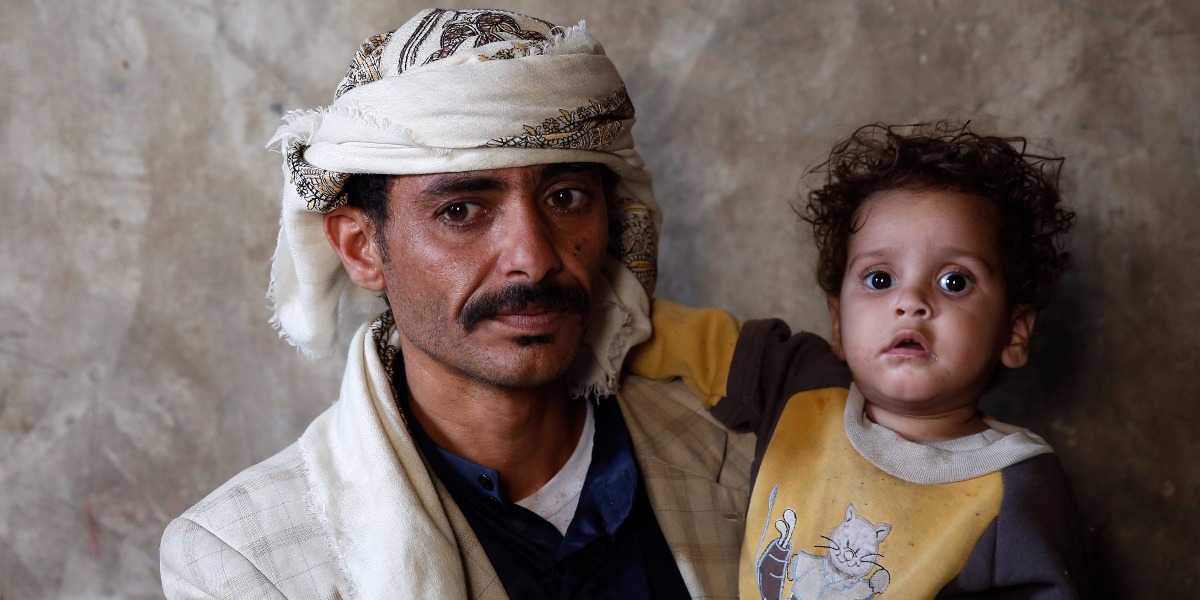 AP Photo/Hani Mohammed
In this Monday, March 28, 2016 photo, Faisal Ahmed, whose son, Udai, died of severe acute malnutrition, poses for a photo with one of his children at his house in Hazyaz village, on the southern outskirts of Sanaa, Yemen. Hunger has been the most horrific consequence of Yemen’s conflict and has spiraled since Saudi Arabia and its allies, backed by the U.S., launched a campaign of airstrikes and a naval blockade a year ago. The ripple effects from war have tipped a country that could already barely feed itself over the edge. (AP Photo/Hani Mohammed)

Saudi Arabia on Saturday intercepted and safely destroyed a missile aimed at the capital city of Riyadh by Houthi rebels in neighboring Yemen, where a Saudi-led coalition is intervening to oppose the rebels in the Yemeni civil war.

After news of the missile broke, President Trump blamed the attack attempt on Iran. Like the Houthis and unlike the Sunni Saudis, Iran is predominantly loyal to the Shiite branch of Islam, and Tehran has long been accused of funneling arms and other support to the rebels’ cause. Iran denied responsibility for Saturday’s missile, and the Houthis claimed it, but Saudi Arabia echoed Trump’s words, declaring on Monday Iran had committed an “act of war” and warning that Riyadh would respond accordingly.

The primary part of that response we’ve seen so far is the Saudi coalition’s Monday decision to seal off Yemen from the outside world. The ostensible goals are to keep out Iranian weapons, starve the Houthi rebels of military support and bring Yemen’s internal conflict to a close, but the blockade’s real impact is to literally starve the Yemeni people.

For though the blockade was tightened Monday, it is nothing new. The Saudi coalition has been keeping vital shipments of food, medicine and other necessary supplies out of Yemen for nearly three years. Because Yemen must import 85 percent of its food, the blockade has been lethal.

No container ships carrying pharmaceuticals have been permitted to dock in Yemen since 2015, and just 21 container ships of food were allowed to dock from January to August of this year. During the same period of time in 2014, 129 food ships came in. Riyadh claims its blockade doesn’t deny or delay humanitarian ships, but independent investigations show that is not true.

Today, many in Yemen rely on humanitarian aid just to stay alive, with the UN saying in 2015 that 80 percent of the country’s population required some sort of assistance. One in three children, including half a million kids under the age of five, suffers from severe malnutrition. Medical staff are overworked and under-supplied. An estimated 10,000 people have died simply because the medical treatments they needed could not be imported. These are deaths by thoroughly preventable and manageable diseases. Insulin is going bad while it’s held at the border. Cholera is running rampant as antibiotics expire at the ports.

It is no exaggeration to say photos of deplorably malnourished Yemeni children have all the horror of images from Nazi concentration camps. David Beasley of the World Food Program predicts that even two weeks of the tighter blockade rules instituted Monday will put “hundreds of thousands of children’s lives” on the line — and that’s if they survive the coalition’s airstrikes on innocent people.

Yemen is considered the world’s worst humanitarian disaster by the U.N.

Now, at this point, you may be thinking, “This is shocking, but ultimately not surprising. The Middle East is a chaotic and violent place, and it has been for some time. What’s happening in Yemen is an extension of the broader Sunni vs. Shiite conflict, and while it’s incredibly tragic, this is a regional conflict that we as Americans obviously can’t solve.”

True enough, but here’s the thing: That Saudi-led coalition is made possible by Washington. The blockade is happening with our government’s endorsement, and the entire Saudi intervention is happening with our government’s material and intelligence support. Washington is selling the Saudis weapons, refueling their bombers, planning their flights and using our Navy to bolster the blockade in Yemen’s ports. Ending U.S. support wouldn’t magically make Yemen peaceful, but it would let in the food and medicine ordinary people desperately need.

RARE POV: Justin Amash: Why are we giving the Saudis $1 billion in weapons with zero debate?

This all started under former President Obama, but Trump seems perfectly happy to maintain his predecessor’s policy in this regard. In fact, on Monday he tweeted an enthusiastic endorsement of the Saudi crown prince, Mohammed bin Salman, who this past weekend consolidated his own power by arresting rival princes. The crown prince also happens to be the driving force behind Saudi action in Yemen, a stance that has earned him the nickname “Reckless” among other members of the Saudi royal family who are not so callous about Yemeni suffering.

Trump has no qualms about changing his mind as he sees fit, and he apparently delights in undoing Obama’s legacy. Yemen is a situation in which he must do both. U.S. support for the Saudi coalition’s war crimes is shameful, counterproductive and wrong. Monday’s blockade announcement should be the very last straw.