President Trump’s decision to launch about 60 Tomahawk missiles against Syrian regime targets Thursday night has been met with widespread disbelief and disappointment among many of his most dedicated supporters, as well as skeptics who held out hope he might change course from the failed interventionist foreign policy of the past decade and a half:

Even Ann Coulter, among the president’s earliest and most consistent cheerleaders, is miffed:

Trump campaigned on not getting involved in Mideast. Said it always helps our enemies & creates more refugees. Then he saw a picture on TV.

Over at the American Conservative, Robert W. Merry offers a thoughtful representation of this complaint:

It may be too early to tell for sure, but Donald Trump is looking more and more like a phony. He’s also looking like a weakling. And a political ingrate. All this is coming into stark relief with accelerating events involving Syria. The United States launched dozens of missiles against Syrian military installations to retaliate for the chemical attack on rebel-held territory. Thus did Trump demonstrate that, to the extent that his foreign policy differs from that of his predecessor, it is more aggressive and adventuresome than Obama’s. That’s the opposite of how he campaigned.

Merry is correct that while on the campaign trail Trump bashed U.S. intervention in Iraq, said intervening in Syria (a long-standing plan of his then-opponent Hillary Clinton) would be a mistake, warned against further destabilizing the Middle East, and advocated diplomacy as the way to deal with Russia.

Trump even made these comments shortly after he was elected, remarks you probably could have convinced me came from Ron Paul if I hadn’t known their true source: 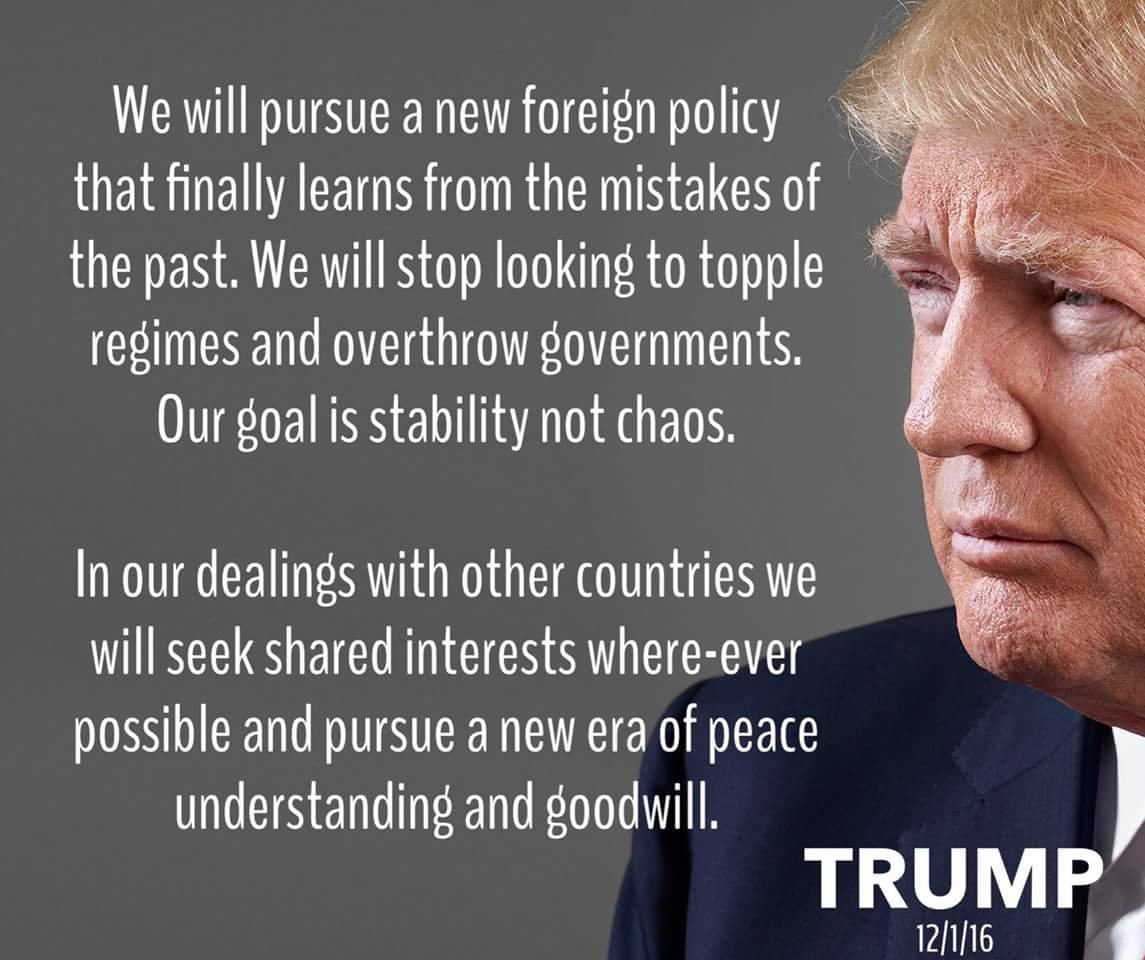 The trouble is that’s far from all Trump said about foreign policy. Looking back at his campaign statements, I’m not surprised at all by this Syria strike.

Here’s a list I made back in January of 2016 of interventionist statements Trump had made up to that point:

Trump has repeatedly endorsed the possibility of American ground troops in Iraq and Syria, expanding and prolonging that “stupid” war.

He has criticized Obama for not sending in more American soldiers already.

He wants to keep troops in Afghanistan long-term.

He speaks enthusiastically of increased airstrikes, despite the fact that airstrikes were central to Clinton’s 2011 Libyan intervention—and the fact that under Obama the Pentagon has already launched so many airstrikes against ISIS that we’re literally running out of bombs.

He has announced his plan to commit war crimes, intentionally bombing women and children.

He claims to be the “most militaristic” GOP candidate—and while that’s a much-contested title this cycle, Trump is at least in the running.

Even his supposed Iraq War prescience isn’t as good as he makes it out to be: His big opposition announcement came in July 2004, more than a year after the invasion, and Trump voted to reelect George W. Bush a few months later. It should thus be no surprise that Trump has selected remorseless, neocon Iraq War architect John Bolton as a foreign policy advisor.

Rare Politics Editor Jack Hunter made a similar accounting several months later. As he concluded then, “Every shrewd [foreign policy] criticism Trump mouths is accompanied by an avalanche of horrible, undesirable and morally indefensible positions.”

Reviewing this record now, it becomes more obvious than ever that Trump’s general pattern is to endorse military action when it is first proposed, oppose it as the tide of public opinion turns — no one will deny the man can read a crowd — and then use his slightly ahead-of-schedule opposition as a cudgel against his political enemies. Now we see the fourth step of the pattern: launching exactly the same sort of military intervention for which he blames his opponents.

Much has been made of the idea that Trump’s supporters took him seriously, but not literally, while his critics and the media did the opposite. With foreign policy, it seems to me that formula was reversed.

Trump told us he is the “most militaristic,” that he is eager to escalate and expand our current wars even if he does not intend to launch new ones. (This Syria debacle manages to do both.) Why didn’t his supporters and friendly skeptics take that seriously? It is only through incredibly selective listening that one could have honestly concluded that Trump would change things for the better.

As I said when I made that list last January, I would have been happy to be proven wrong in my suspicion that Trump would be no better on foreign policy than the neoconservatives who opposed him. This Syria episode suggests I’ve unhappily been vindicated.