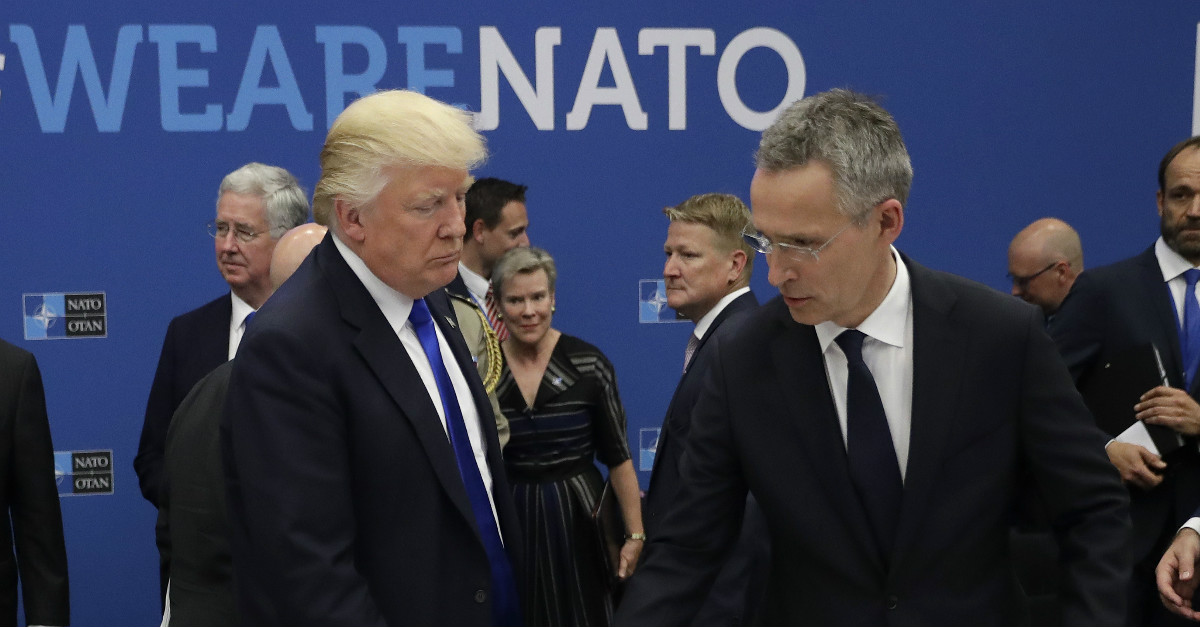 AP Photo/Matt Dunham, Pool
U.S. President Donald Trump and NATO Secretary General Jens Stoltenberg takes a seat during a working dinner meeting at the NATO headquarters during a NATO summit of heads of state and government in Brussels on Thursday, May 25, 2017. US President Donald Trump inaugurated the new headquarters during a ceremony on Thursday with other heads of state and government. (AP Photo/Matt Dunham, Pool)

“NATO members must finally contribute their fair share and meet their financial obligations,” President Trump said while speaking to fellow alliance leaders in Brussels this past Thursday, “for 23 of the 28 member nations are still not paying what they should be paying and what they’re supposed to be paying for their defense.”

“This is not fair to the people and taxpayers of the United States,” Trump continued, returning to a favorite theme from the campaign trail. While the United States spends “more on defense than all other NATO countries combined,” our wealthy European allies fail to approach the 2 percent of GDP target for defense spending they all pledged to meet.

Those same allies are now in turmoil over how to respond to Trump’s demands. German Chancellor Angela Merkel said Sunday Europe can no longer “completely depend” on the U.S. for national security, and Reuters reports today from Brussels that NATO Europe leaders are privately debating and “wondering where the military alliance goes next.”

Their agitation is understandable, but here’s there thing: Though Trump’s comments are clumsy, he’s right to raise questions about NATO’s role and function in 2017.

The alliance that was intended to share the burden of defense and make war less likely has fundamentally transformed as it approaches the seven-decade mark, and not for the better. Today, NATO is largely a vehicle through which the United States subsidizes European defense (and thus the European welfare state), launches reckless military interventions and nation-building projects under cover of “multilateral” action, and unnecessarily exacerbates tensions with Russia. NATO, in short, is overdue for a rethink.

The bad news is Trump is unlikely to successfully provoke such a reevaluation if he maintains his present approach to European powers. As the president gave his talk in Brussels, his audience of other NATO leaders exchanged smirks and eye rolls, evincing at best discomfort with — or, in the perception of many observers, derision for — the NATO reform agenda.

These allies may have pledged to hit that 2 percent mark in the next few years, but there is little evidence they intend to keep their promise, or that they find Trump’s efforts to sway them persuasive.

This is at least partly the case because, as demonstrated on the very same day as the Brussels speech, Trump is undermining the foundation of friendly diplomacy and free trade on which the United States’ good relations with our NATO partners truly depends. As two German outlets reported, Trump on Thursday said in a meeting with European Union leadership that Germany is “bad, very bad” for maintaining a trade surplus, a situation Trump might seek to correct by prohibiting or heavily taxing German car sales in the United States. Furthermore, Der Spiegel added in its report, “Trump once again accused the EU of creating a trade imbalance against the United States by unfair means.”

These heavy-handed comments undercut the valuable parts of Trump’s NATO reform agenda on at least two fronts. First, as a self-promoter as practiced as the president should realize, condemning U.S. allies will not make them more amenable to American requests. Leveling this inept criticism of an ally like Germany while practically in Merkel’s backyard is the sort of basic misstep Trump must avoid.

Diplomacy, as it happens, requires diplomacy.

But second, and more important, the United States’ free market economy is central to our global influence and security. Relying too much on military might while threatening free trade and, by implication, undermining our own economy, is a recipe for disaster. Any advantages NATO offers become a dead letter if they are not undergirded by mutual economic benefit and good diplomatic relations.

Banning BMW is not the route to American prosperity and peace.

Trump’s burden sharing advocacy is often oddly expressed and, as the German cars comments show, sometimes at odds with his other policy goals. That’s a shame, because the president’s willingness to stir the pot on this issue is a bright spot in an otherwise muddled and unoriginal foreign policy agenda. It is past time for a healthy debate about NATO in the 21st century, and we might have it too, if only Trump can get out of his own way.