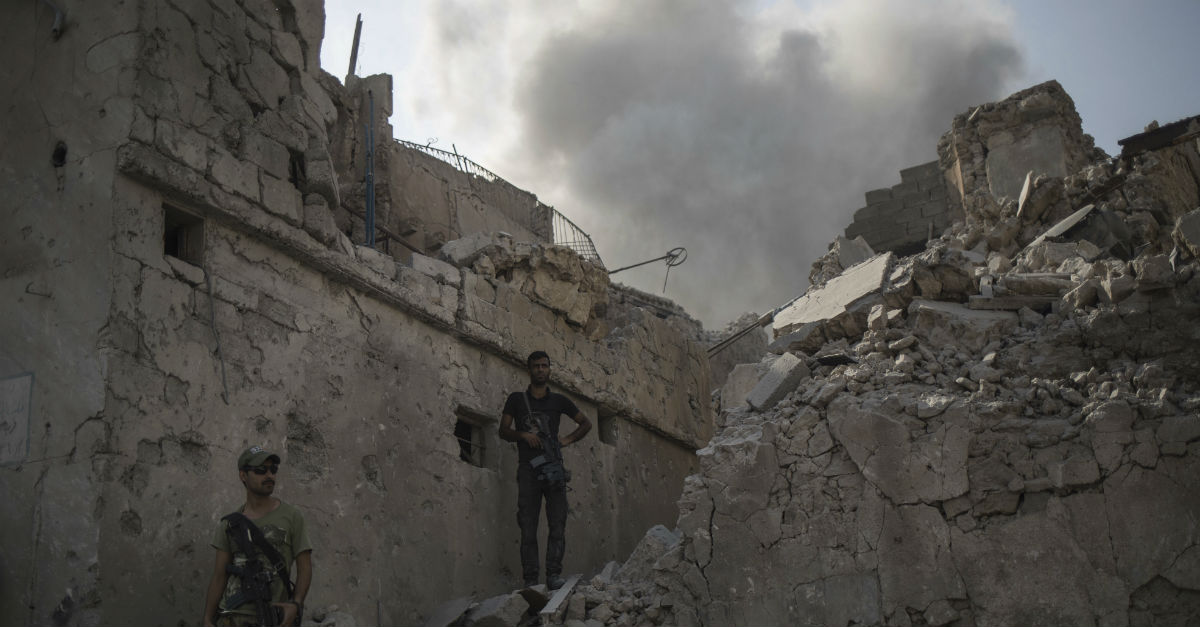 In 2014, 30,000 Iraqi soldiers fled the city of Mosul after it came under attack by a force of only 800 Islamic State fighters. Yesterday, after three years of war that have seen the painstaking rollback of the ISIS caliphate, the Iraqi army took a minute to celebrate. The Islamic State has finally ceded Mosul, its last Iraqi urban stronghold; the battle to reclaim the city, which spanned all of 2017, is nearly over.

?The world did not imagine that Iraqis could eliminate Daesh,? declared Iraq’s triumphant prime minister Haider al-Abadi in Mosul. He’s right and the Iraqi armed forces deserve their vindication. The collapse of ISIS’s barbaric statelet, with its suffocating theocracy and gratuitous executions, is a landmark moment in Middle Eastern history. But the downfall of the caliphate is also just that: the destruction of the Islamic State’s state, not the greater forces behind it, not the countless other problems that have plagued Iraq since the American invasion in 2003, not the ongoing incubation of terrorism.

The battle against ISIS might be nearing its conclusion but the fight for Iraq will rage on.

RELATED: Why those who warn against ?overlearning the lessons of Iraq? are wrong

First on the list of post-ISIS challenges is the network of Shiite militias known as the Popular Militarization Units (PMUs), which were first organized in 2014 as a paramilitary answer to the Islamic State. Some of the PMUs are backed by Iran while others aren’t, but all are outside the normal purview of the Iraqi chain of command and many exercise control over Sunni communities in northern and western Iraq. Journalist Ramita Navai investigated the PMUs in a documentary for Frontline and found another sectarian conflict waiting to happen, with Shiite gangs accused of everything from kidnappings to murders, and Sunnis warning of a violent backlash if the crimes continue.

You didn’t think Iraq’s sectarian fires would be doused with the Islamic State did you? Indeed, the PMUs now seem more than ever like a feature of their country’s political landscape, akin to Hezbollah in Lebanon. Enter Iran’s Supreme Leader Ali Khamenei, who said last month that the PMUs must remain active in Iraq. Meanwhile, in a warning of intra-Iraqi jostling to come, one of the militias’ senior commanders has said the Kurdish peshmerga, which helped fight the Islamic State, could be driven out of post-ISIS areas. Iraqi Sunnis initially welcomed the Islamic State because they were being oppressed by Iraq’s Shiite government. With the PMUs flexing their muscles, the cycle may be starting anew.

Could another turn of the sectarian wheel result in a Sunni pushback that culminates in an ISIS 2.0? It’s not unfathomable. The caliphate might be defeated but the underground terrorist cells honeycombing Iraq have not been rooted out. The Iraqi government is still fractious, deeply corrupt, isolated from its own citizens, divided among powerful politicians some of whom look like warlords when you squint. Former prime minister Nouri al-Maliki is back and threatening a hard, pro-Shia, pro-PMU line, while Moqtada al-Sadr mobilizes the streets against corruption and Abadi tries to hold everything together. Poverty is still endemic, leaving many young Iraqi men without prospect. Saudi money still sails across the world, funding extremism in the Middle East and Europe.

RELATED: At the rate we?re going, we?ll be stuck in the Middle East for decades to come

So while ISIS itself might be on its way out, the conditions that nourished it are still there. Even in Mosul the fight isn’t yet finished. Skirmishes continue between the Iraqi army and remaining terrorist holdouts, and the city will need to be swept for the Islamic State’s hallmark IEDs. Western air support, that great panacea of the Obama administration, along with the Iraqi armed forces’ own attacks, have leveled much of Mosul, meaning Iraq’s second-largest metropolis will need to be rebuilt, a process that’s proven costly and sluggish in other cities.

It’s a daunting list of challenges and it takes me back to an anonymous Iraqi who was interviewed during Navai’s Frontline report. Stung from recent atrocities committed by the PMUs, he made a harrowing prediction. “After ISIS there will be a civil war,” he said, “because blood has been spilled.”