With Syria, Rex Tillerson has his opportunity to shine 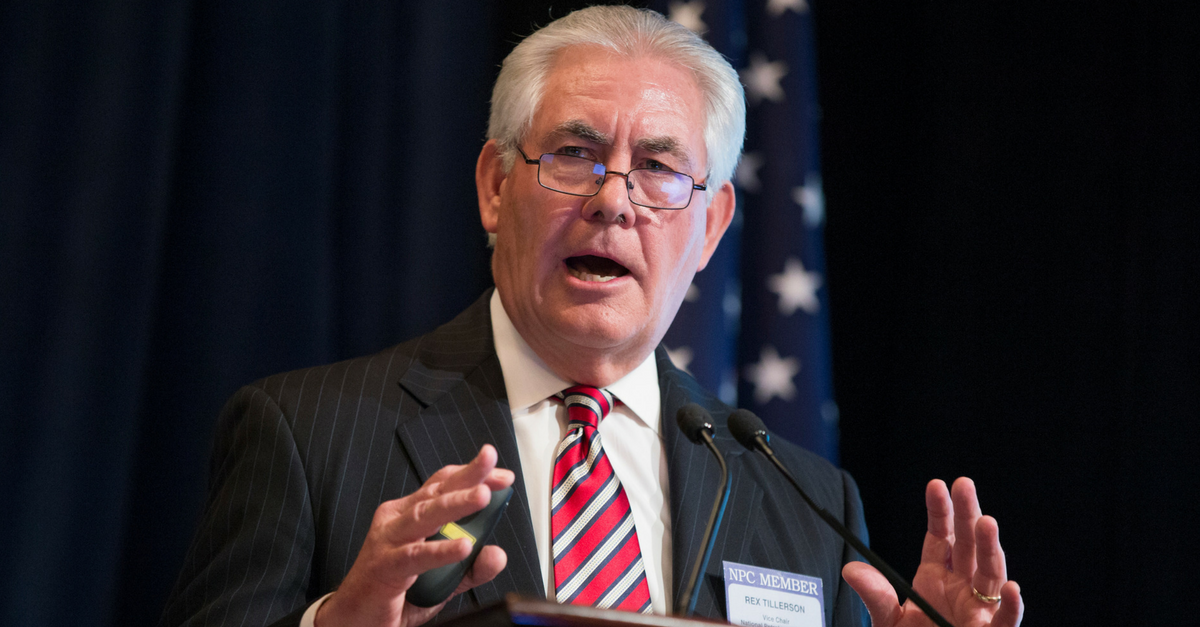 Secretary of State Rex Tillerson has been a ghost during the first 11 weeks of the Trump presidency. Call it being frightened of the press corps. Call it a lack of transparency. Call it habit from being in the private sector for so long. Call it whatever you want. The reality is clear as day: Tillerson is the opposite of his predecessor John Kerry, a man who coveted the national spotlight and liked to view himself in the mold of a George Schultz. Kerry was obsessed with getting the big deal done and winning that Nobel Peace Prize. Rex Tillerson, in contrast, doesn’t seem to be obsessed over anything.

Last week’s chemical weapons attack in Syria, however, has sent a lot of heat and pressure Tillerson’s way. For the first time since he was confirmed to the job, the former Exxon-Mobil chief is discovering the monumental importance of being Secretary of State. The latest war crime perpetrated by Bashar al-Assad has forced Tillerson out of his comfort zone – indeed, we’ve seen his face in front of the cameras more over the last week than in the previous 10 or 11 weeks combined.

When someone holds the position of Secretary of State, he isn’t just serving as senior diplomat for the most powerful country on the planet. He also happens to be the principal salesman for American foreign policy goals around the world. We like to poke fun at John Kerry for being too eager, anxious and devoid of sleep, but in many ways those are exactly the qualities that one needs in order to be (or become) impactful at Foggy Bottom. As bad as the Syrian chemical weapons attack was – and there is no question that it was one of the worst atrocities we’ve seen in Syria since the Assad regime’s sarin gas attack in 2013 – it could provide Tillerson with the opportunity he needs to convert himself into a principal player in Donald Trump’s cabinet.

Tillerson got a lukewarm response at best during his first trip to Northeast Asia, when his chummy words with the Chinese foreign minister about an equal and constructive relationship got him into hot water with China hawks. His powwow with NATO foreign ministers a week later was rough as well — he all but ordered European ministers to prepare binding defense spending plans by the end of the year. America’s allies still aren’t sure what to think about or what to expect from President Trump, so Tillerson is at the ass-end of an incredibly difficult mission, balancing an “America First” message from his boss with one of reassurance for Washington’s jumpy allies.

At times, it has looked as though Rex is reporting to Ambassador Nikki Haley rather than the other way around. In a town where perception is everything, that hasn’t provided him with the bureaucratic juice that he needs. John Kerry is probably sitting in Georgetown aghast.

The tragedy in Syria is an opening, however small, for Tillerson to be more aggressive on the world stage and a more visible figure in the international press. His jetting to meetings in Europe, his more frequent appearances in front of reporters and his high-stakes interactions with Russian Foreign Minister Sergey Lavrov in Moscow could be the beginnings of a more consequential Secretary of State. Tillerson should keep it up if he wants his fellow diplomats to believe he has Trump’s ear and is speaking on behalf of the president.