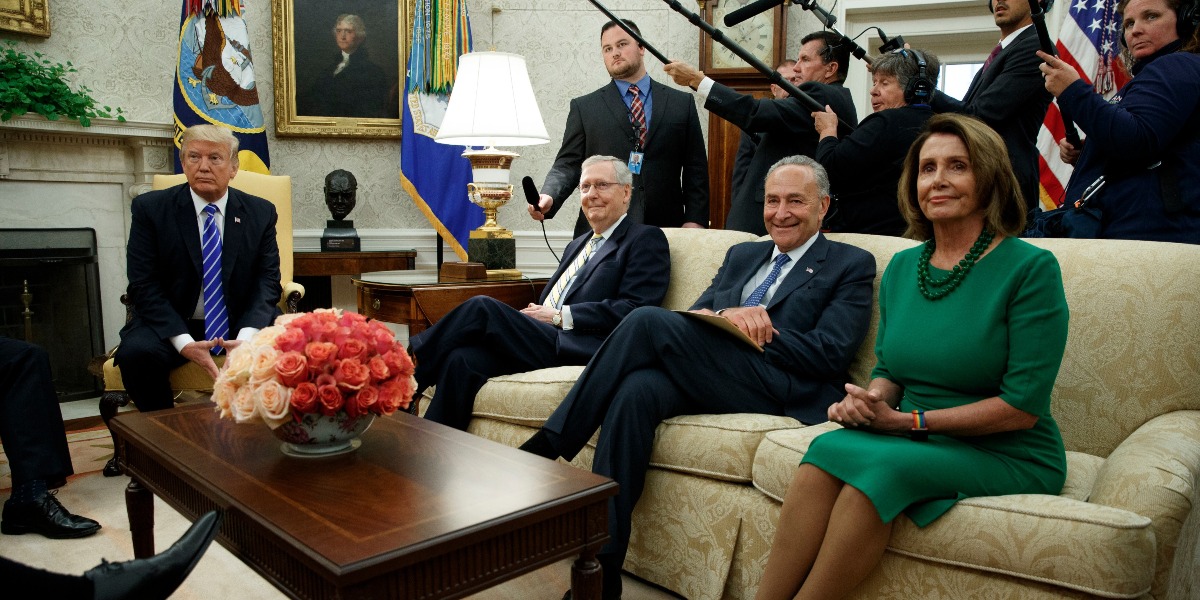 It’s been an impressive week for legislators seeking to accomplish something in Washington. Just as the national debt surpasses the $20 trillion mark, President Donald Trump strikes a deal with Senate Minority Leader Chuck Schumer (D-N.Y.) and Rep. Nancy Pelosi (D-Calif) to continue the federal government?s unsustainable deficit spending, and they agree on a deal that legally protects the DREAM program without funding for the wall.

To critics who say that nothing gets accomplished in Washington, take a close look at this week. Things got done in Washington all right, and it was very much the opposite of what candidate Donald Trump promised the voters.

A little over a year ago, on April 27, 2016, Trump promised, ?I will never send our finest into battle unless necessary, and I mean absolutely necessary, and will only do so if we have a plan for victory with a capital V. The world must know that we do not go abroad in search of enemies.?

He?d been tweeting his opposition to the conflict for years. Five years ago, he called Afghanistan “a complete waste? and added: “Time to come home!” In January 2013, he wrote: ?I agree with Pres. Obama on Afghanistan. We should have a speedy withdrawal. Why should we keep wasting our money — rebuild the U.S.!? Later that year, in November, he wrote, ?Do not allow our very stupid leaders to sign a deal that keeps us in Afghanistan through 2024 — with all costs by U.S.A.?

Eight months into his presidency, Trump was singing a different tune.

?Conditions on the ground, not arbitrary timetables, will guide our strategy from now on,? said President Trump as he authorized sending more troops to Afghanistan in August.

In the Star Trek franchise, the Borg are a parasitic, cybernetic entity that forcibly annexes other species and assimilates them into ?the Collective,? its intergalactic hive mind. Individual Borg seldom speak, but an audio message to their targets says “resistance is futile” and sometimes includes the reminder that “your culture will adapt to service us.” In D.C., we have our own Borg, a collective that can take any presidential candidate — regardless of whether there is a D or R after their name — and manufacture the exact same outcome.

Consider this: As a young Democratic senator from Illinois, Barack Obama catapulted himself to national fame in large part by opposing George W. Bush?s war in Iraq. Although he continued to insist that the wars were counter-productive, Obama was unable to disengage the U.S. from the ongoing wars, and even managed in his presidency to bomb a few additional countries (Libya and Syria).

At the beginning of his presidency, Obama said he couldn?t legalize Dreamers because that would be unconstitutional and ?I am not a king. I can?t do these things just by myself.? He also said he couldn?t suspend deportations through executive order or bypass Congress and change the laws on his own, because ?that?s not how a democracy works.?

It?s not how a democracy works, but the hive mind has a will of its own. Obama went on to sign an executive order authorizing something he himself repeatedly claimed was unconstitutional. It doesn?t matter who the current occupant of the White House is, because The Bureaucracy and its minions, the Borg,well  functions independently. Resistance is futile.

Caught on a hot mic Thursday afternoon, Schumer was heard telling a colleague that Trump ?likes? the Democrats and understands that he has to work with them.

Schumer sounded thrilled. ?It will make us more productive too,? he whispered.

Indeed. It?s a myth that Washington doesn?t get anything done. This week, legislation was moved forward that advances the interests of powerful lobbyists, even if it’s the opposite of what was promised to voters. That’s not the total inaction that Congress is usually accused of. So during a week like this one, it’s helpful to remember that just like with the Borg, resistance to Washington’s hive mind is futile.