For the sake of limited government, reject a Trump cult of personality 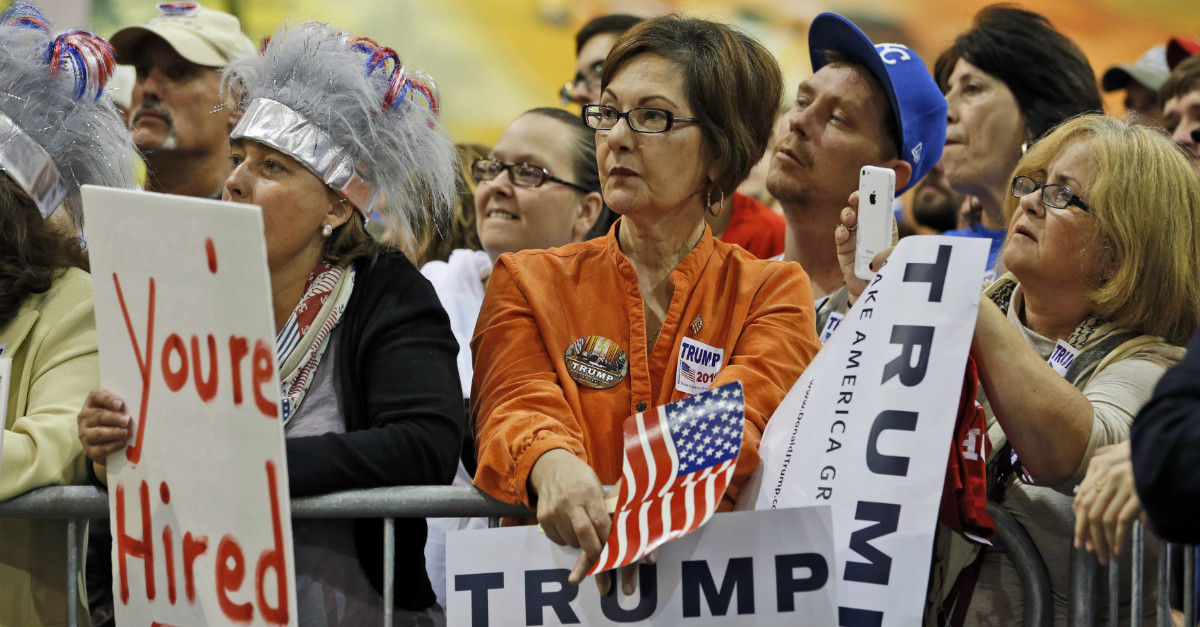 From the moment President Obama began generating an enthusiastic national following, many on the right accused his supporters of participating in a personality cult.

?Since 2007, Barack Obama has been building a cult of personality,? wrote Ben Shapiro at Breitbart in a representative piece on the subject published in 2012. Illustrating his point was a collection of photos, each showing some variation of Obama-specific symbols (mostly his face or the iconic O logo) woven into more general American imagery (the O logo replacing the stars section of a U.S. flag, for example, or the sycophantic ?For All? viral photo campaign that saw Obama supporters pledging personal allegiance to the man himself).

?Obama’s been doing this since 2007,? Shapiro continued, ?when his followers, including Rolling Stone magazine, tried to portray him as a Jesus-like figure come to rescue America from perdition. But as president, you would imagine he’d tone it town. You’d be wrong.?

Five years later, this ?cult of personality? critique holds up uncomfortably well. The extent to which Obama and his team intentionally fostered this phenomenon may be debatable, but that it flourished is undeniable. From ?Obama Girl? in 2007 to Chris Rock?s 2013 declaration that Obama was like the country?s ?boss? and ?dad? to Saturday Night Live?s obsequious rendition of ?To Sir With Love? in 2017, the Obama presidency always mixed personality with politics.

With Obama out and Trump in, this all may seem like a rehash of what is, in the 30-second attention span of the social media era, ancient news. And it is true that, stylistically, Trump and Obama and their respective supporters are very different.

But look past those superficialities and it becomes clear that Trump has his own cult of personality, which is becoming just as persistent as Obama?s and is even more blatantly encouraged by the Oval Office.

Just a few days into the Trump presidency, the new personality cult is already evident. It was evident in Trump?s declaration that his own inauguration was a “National Day of Patriotic Devotion.? It was evident in his inaugural speech lines about ?total allegiance to the United States of America? and the ?new national pride? that is supposed to ?stir ourselves? because of his presidency.

It was evident in Trump?s first interview as president, in which he boasted about his own remarks at a federal agency (?People loved it. They loved it. They gave me a standing ovation for a long period of time?) and fixated on the size of his inaugural crowds. It was evident in the White House press release composed entirely of excerpts offering ?praise for President Trump?s bold action.?

It was evident long before he was ever sworn in, in the self-aggrandizing tone of Trump?s candidacy, and the Trump campaign?s declaration that ?Trump will protect you? and ?he is the only one who can,? and especially in Trump?s claim that he ?alone can fix? America.

In short, as a GOP strategist wrote to his fellow Republicans during the primaries last year, ?Everything that set your teeth on edge, and raised your hackles and made you loathe Barack Obama is there in Donald Trump,? from the ?cult-like followers? to the ?loose, lowest-common-denominator word-vomit disconnected from any real policy.? The style is very different, but the underlying similarities are real.

RELATED: No, anti-nepotism laws should not be ignored so Trump can appoint his family

My concern is not with whether one supports a president but how. It isn?t about the personality but the cult.

And the troubling thing about President Trump is that after years of rightly criticizing Obama supporters for letting the power of the presidency explode because they liked the man in the Oval Office, Trump supporters seem disturbingly willing to do the exact same thing.

With Obama gone, we see now how his cult of personality did real damage to constitutional, limited governance?damage that will be extremely difficult to undo. It is vital that Trump supporters not repeat Obama fans? mistakes.