After almost a month of trying to squeeze his nominees through a recalcitrant Senate, today Donald Trump faces question marks on only two of his Cabinet seats. The first is secretary of labor, which Trump had tried to fill with a corporate maven who allegedly abused his ex-wife. The second is budget director, which Trump is trying to fill with an authentic fiscal conservative.

The juxtaposition between those two controversies should show how upside-down the Senate’s priorities are—an alleged spouse beater placed on the same plane as someone who believes the government should have to make do with a tad less.

The drooling zealot in question is Congressman Mick Mulvaney and his nomination has drawn the opposition of his fellow Republican John McCain. As goes McCain, so often goes Lindsey Graham, and then Republicans would need only one more defector to join a united Democratic front and block Mulvaney entirely. With porkmeister Thad Cochran, the chairman of the Senate Appropriations Committee, making unsympathetic noises, it is very possible that could happen. (UPDATE: Mulvaney has since been confirmed, thankfully, with McCain the only Republican voting against.)

Only in belt-loosening Washington would Mulvaney have a rap sheet. Among his felonies was his 2013 amendment to shave off $3.5 billion in defense spending (it was adopted by the House). McCain helicoptered that measure around like a terrible towel even though it only amounted to a 0.6 percent reduction in the total defense budget for that year. America’s military appropriations have almost doubled between 2001 and 2012, the national debt is soaring into the ionosphere, but let’s crucify the guy who thought the Pentagon might survive a love tap. It’s the stuff of farce.

Mulvaney also supported sequestration budget cuts, as did McCain, though the Arizona senator sounded aghast this week when he read a quote from Mulvaney on the Senate floor: “In the greater scheme of things, sequestration cuts were not that big.” They weren’t. It was only two years of actual spending reductions followed by Congress’ favorite trick, cuts against the rate of spending (akin to me anticipating a raise next year, getting a slightly smaller raise than I’d expected, and shrieking that it was a pay cut), and even then the craven Ryan-Murray budget mitigated much of the “damage.” Yet the hysteria was almost unprecedented. Massive government layoffs, riots in the streets, and all of North America being annexed by Hezbollah were among the consequences of sequestration predicted by our cautious and considered political class. None of that came to pass, yet Mulvaney is still to be put in the stocks, one more heretic against Washington’s angry and absent god of unlimited bureaucracy.

The most galling thing about this is that McCain knows the Defense Department is hamstrung by inefficiency. He’s tried, for example, to overhaul the military’s humongously wasteful procurement system—in fact, his bill to do so was far more stringent than his counterparts’ on the House Armed Services Committee. Yet now he goes and slams the door on his fellow reformer’s fingers, insinuating that Mulvaney is weak on national security. The opposite is true. A leaner and more streamlined military, unburdened from a overly corpulent Pentagon, is very much in the interest of America’s defense, something I think McCain understands, something I wish he would admit in others.

McCain’s other charges against Mulvaney include the congressman’s vote to withdraw American troops from their 16-year-long Sisyphean mission in Afghanistan and his (very Reaganesque) support for a government shutdown in 2013. In opposing Mulvaney, McCain claims to be acting in the interest of our service members, many of whom are my age or younger, which means later in life they’re going to be stuck with the tab for this wildly expensive and unpaid-for government of ours. So who’s really got their back? The guy who wants to tame this monster? Or the senator who will bequeath to them a fiscal calamity on his way out the door?

This shameful episode demonstrates what I’ve argued for some time: GOP elites can tolerate social conservatism and neoconservatism courses through their bloodstream. But fiscal conservatism? Even a timid suggestion that Washington should cut back so others can have a more guaranteed future? You may as well be waving around a Horcrux. 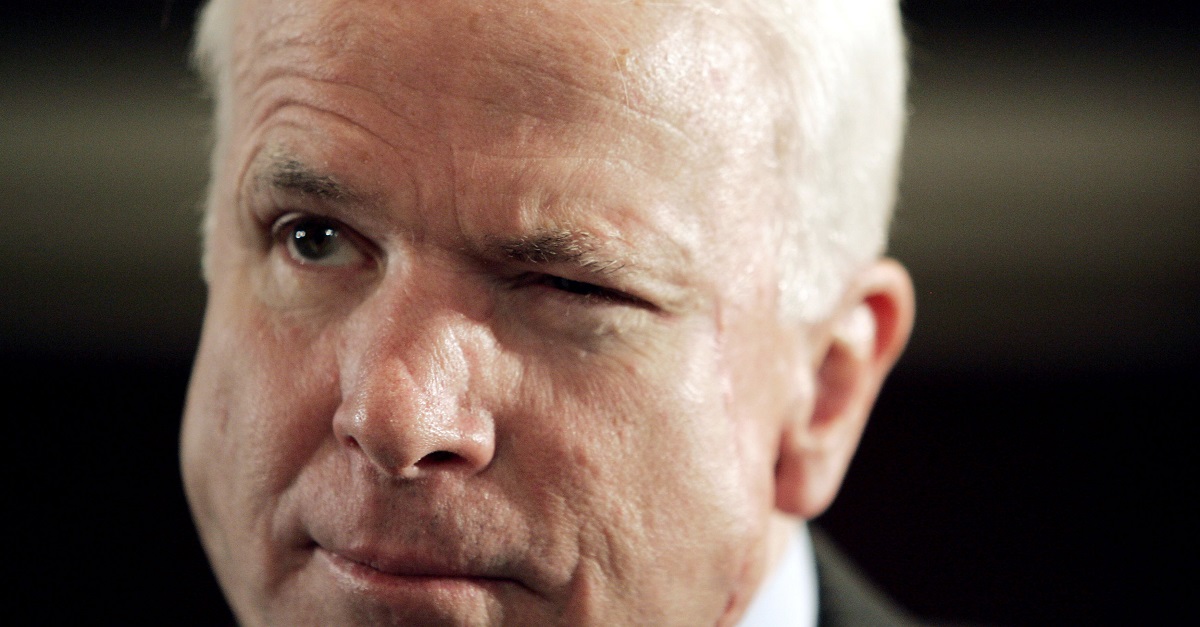