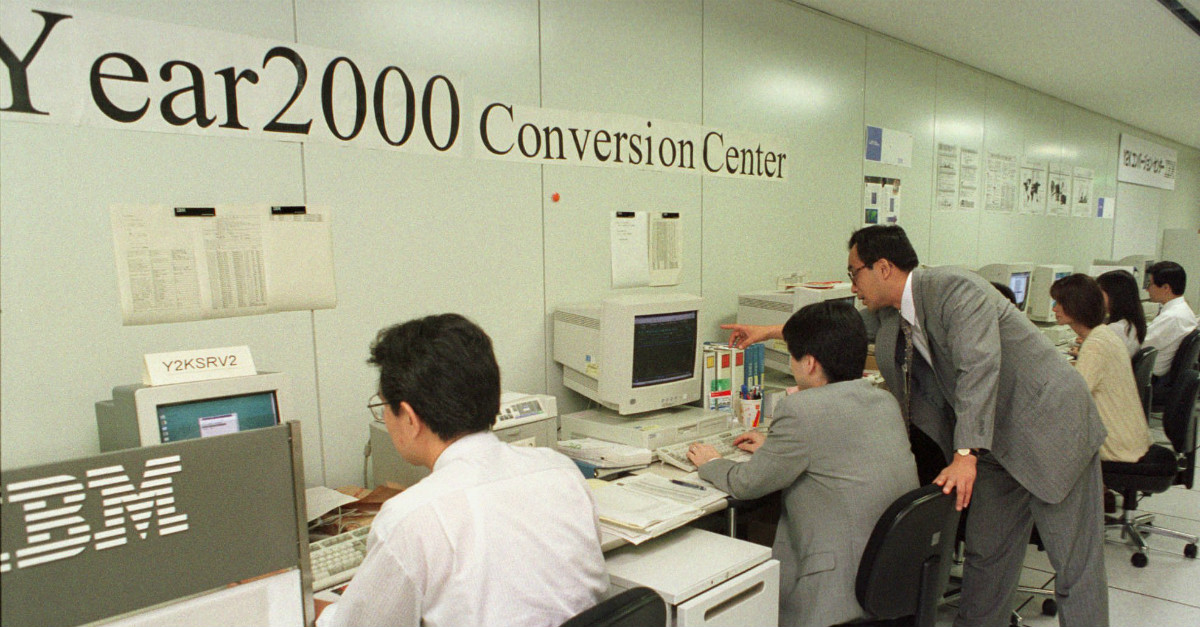 AP Photo/Koji Sasahara
Computer programmers work at the Year 2000 Conversion Center of IBM Japan, Ltd. at its Makuhari office, east of Tokyo, July 27, 1998. The main question about the Y2K bug: Is the problem a global economy-busting bug that could cripple air travel, electrical grids and phone service? Or an overhyped pseudo-crisis fed by consultants getting rich? (AP Photo/Koji Sasahara)

What were you doing when you got the memo that the world was safe from the Y2K bug? Personally, I don’t have the faintest memory of New Year’s Eve 2000 — not because I was inebriated; because I was only 13 — but if you’re a federal worker, the answer could conceivably be buying an iPhone or listening to Taylor Swift or mulling over Donald Trump’s election. The reason is that the feds, for the past 17 years, have been required to file paperwork in preparation for a potential Y2K calamity that’s come and gone, and the reason for that is that government is absurd.

The Y2K rule was finally canceled earlier this week by Mick Mulvaney, Donald Trump’s deregulation guru, and thus far the world’s Pentium IIIs do not seem to have been affected. “We’re looking for stuff everyone agrees is a complete waste of time,” Mulvaney said. In that spirit, he issued a memo announcing several other paperwork requirements that will be stricken, including one that mandates the costs of the Deepwater Horizon oil spill be documented more than a year after the government settled with BP, and more mundane stuff like Pentagon reporting rules that chew up 1,200 man hours every year.

I once made the point on a panel moderated by a left-wing talk show host that the government had plenty of fat it could trim. The host countered that there was no waste in the federal government at all and cited some study from the Yglesias Center for Fabian Exuberance or whatever. Uh-huh. It’s easy to laugh, but this is actually the underlying assumption beneath so much of the commentary in Washington, which treats government as a purringly efficient machine and any attempts to cut it as a direct assault on the poor—”austerity,” to use the hysterical watchword. Minor efforts towards fiscal solvency like the sequester are circled and destroyed. Libertarians who suggest there might be a man behind the curtain are branded creatures of the fringe.

RELATED: The federal government doesn’t need to be relocated, it needs to be cut

Except every so often the drapes flutter in the breeze and you catch a glimpse at the shambles within. Y2K requirements and thousands of wasted paperwork hours are the norm, not the exception. Human nature being the immutable statue that it is, when people are lavished with taxpayer money and little outside demand for accountability, they naturally waste dollars and time, cling to routines regardless of whether they matter, set themselves on autopilot from 9 to 5 and resist calls for reform.

If I can waste most of a day on hold with AT&T ricocheting between different functionaries at different departments none of whom seem to have the first clue how to port a phone over from Verizon, then imagine how bad it gets at a thoroughly non-competitive entity like the Washington bureaucracy. The first time I called the IRS’s alleged helpline, I waited on hold for 45 minutes before being hung up on. The second time I called, I waited an hour and then hung up myself. The federal government is a strange beast that reports unnecessarily on Y2K but can’t effectively run a call center but that many think can effectively run the nation’s entire health care apparatus. PJ O’Rourke said, “Giving money and power to government is like giving whiskey and car keys to teenage boys,” but at least most drunk-driving high schoolers eventually grow up.

Not so in D.C. Thus, in 2015, did the feds spend millions on a study that found members of fraternities like to drink and sleep in. In 2008, the CDC unveiled a new visitor’s center — plan your next summer getaway today! — complete with Japanese gardens and zero-gravity chairs at a cost of $106 million, which replaced another visitor’s center that had been built 11 years prior. In 2014, the D.C. Circuit Court struck down a law forbidding anyone from giving a tour of Washington, D.C. unless he paid the government $200 and passed a multiple-choice exam. In 2015, an internal report found that the Pentagon was set to amass $125 billion in administrative waste over the next five years—it was buried and forgotten until the Washington Post got a hold of it.

How many more examples do we need before we acknowledge that these aren’t aberrations? They encapsulate the modern ethos of government: the tyranny of the wasteful, self-serving, herbivorous bureaucrat gussied up as egalitarian public service.