3 days after Sutherland Springs, the Democrats have a bill ready to ban “assault weapons” 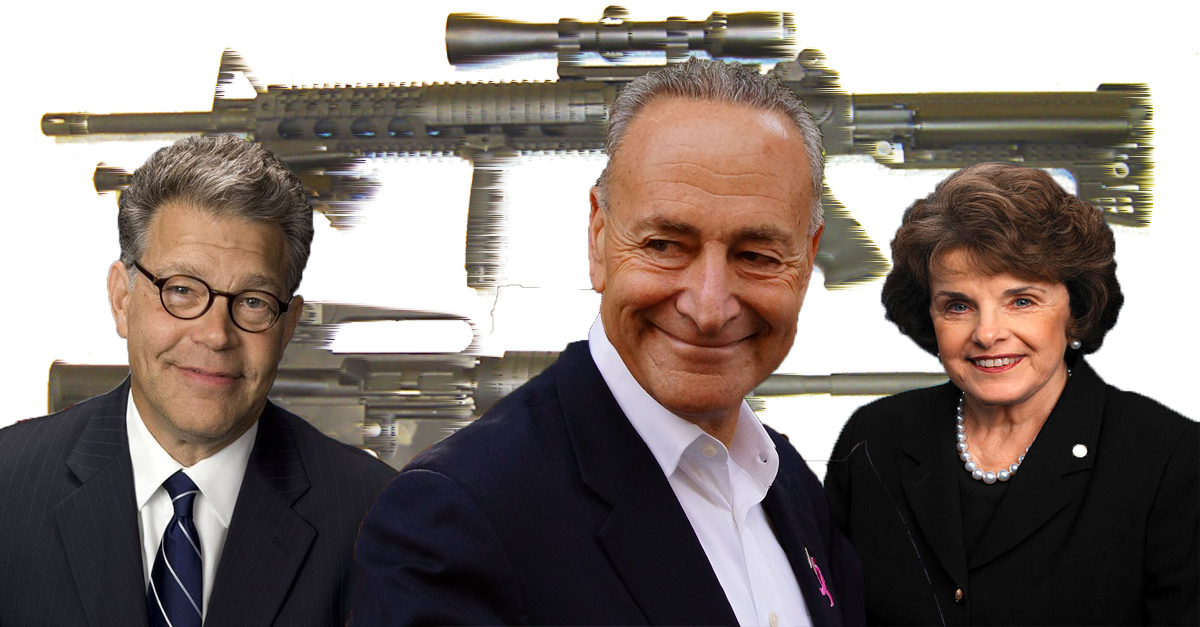 Almost two dozen Democrats in the Senate have slapped their name on a bill aimed at banning assault weapons and bump stocks.

The group, led by Senator Dianne Feinstein (D-Calif.) claim that their bill “will begin removing the weapons of war on our streets.” In a press release, Feinstein stated “this bill won’t stop every mass shooting, but it will begin removing these weapons of war from our streets.” Her office also took a look at gun bans in the United States — beginning with the 1966 University of Texas shooting.

According to her office, the bill will “ban the sale, manufacture, transfer and importation of 205 military-style assault weapons by name,” but Feinstein claims that “owners may keep existing weapons.” If you have an “assault weapon” that is grandfathered into the system, the Democrats’ bill will require that the gun is “stored using a secure gun storage or safety device like a trigger lock.” The law would also ban bump stocks and “other devices that allow semi-automatic weapons to fire at fully automatic rates.”

In a Republican controlled House and Senate, Feinstein seems to know that her bill won’t pass and says that the left side of the aisle is introducing the bill “so that after every mass shooting with a military-style assault weapon, the American people will know that a tool to reduce these massacres is sitting in the Senate, ready for debate and vote.”

RARE POV: Why is the mainstream media ignoring that it took an AR-15 to stop the Texas shooter?

The last time congress passed an “assault weapons ban” was in 1994 and the bill lasted for 10 years, expiring under President Bush. Under that law, legislators learned that one of the toughest parts about banning “assault weapons” is actually figuring out what those two words mean. They couldn’t ban all semi-automatics since that would essentially ban all guns; instead they picked 18 specific guns (including AR-15 models) and banned those. The ’94 law also included a grandfather clause, and since there were already 1.5 million “assault weapons” in the United States, it basically just kept gun manufacturers from making new ones, The Washington Post reports.

While the gun ban was in effect, gun violence fell but a study from the University of Pennsylvania concluded “we cannot clearly credit the ban with any of the nation’s recent drop in gun violence.”

In Sutherland Springs, shooter Devin Kelley used an AR-15 to murder 26 people in the church. During the shooting, he emptied 15 magazines, the New York Post reports. However, Stephen Willeford, who shot Kelley and probably stopped his murderous rampage, also used an AR-15 to save countless lives. In an interview, Willeford, who is a former NRA instructor said that he’s glad he had his “assault weapon” saying “if I had run out of the house with a pistol and face a bulletproof vest and kevlar and helmets, it might have been futile.