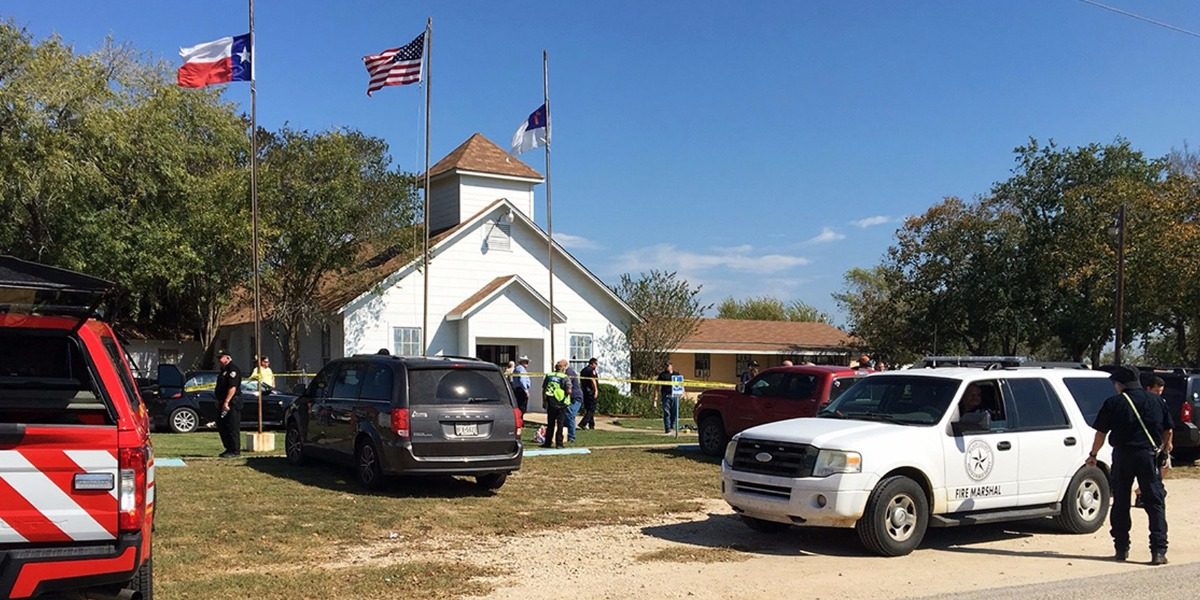 KSAT via AP
Emergency personnel respond to a fatal shooting at a Baptist church in Sutherland Springs, Texas, Sunday, Nov. 5, 2017. (KSAT via AP)

In the first press conference by local and state officials on the tragic church mass shooting that took place Sunday in Sutherland Springs, Texas, we learned for the first time that a neighbor with a rifle sprung to action.

Prosecutor Mark Freeman said Sunday night at the press briefing that, “As (the suspect identified as Devin Kelly) exited the church, a local resident grabbed his rifle and engaged that suspect. The suspect dropped his rifle – which was a Ruger AR assault-type rifle – and fled the church.”

“A local citizen pursued the suspect at that time,” Freeman continued. “A short time later… that suspect ran off the roadway and crashed out. He was found deceased in his vehicle.”

Freeman added, “At this time, we don’t know if it was a self-inflicted gunshot wound or if he was shot by a local resident who engaged him in gun fire.”

We do not know for certain, or officially, whether the armed neighbor helped prevent further deaths in the incident that took 26 innocent lives as of this writing, as Freeman notes.

But multiple witnesses are already suggesting he might have.

What we do know is that gun control advocates were quick to politicize the tragedy, as they always do almost immediately after these events. #GunControl trended on Twitter throughout Sunday. Television host and comedian Chelsea Handler was quick to blame Republicans for the deaths.

Innocent people go to church on Sunday to honor their God, and while doing so, get shot in killed. What country? America. Why? Republicans.

There is a discussion to be had about gun control (and gun rights) following any incident like this, particularly those that capture the nation’s attention. But it should not be in the first few hours when all the details are not known, even if just out of respect for the victims and their families.

Yet it would also be unreasonable for Americans not to discuss how to prevent similar mass violence in the future not too long after what happened Sunday in this small Texas town. There should be passionate debate.

But rational and productive discussion should mean at least knowing of basic details before you shoot your mouth off.

For Handler, or any other gun control advocate, to immediately blame this on Republicans, or gun owners at large, or any other right-leaning individual or group of individuals, is not just inaccurate but shameless.

It’s just as likely that we learn that Devin Kelly was actually stopped by a gun-owner who votes Republican precisely to protect his Second Amendment right to defend himself and his community.

Which is, apparently, what this neighbor did, or attempted to do, on Sunday.