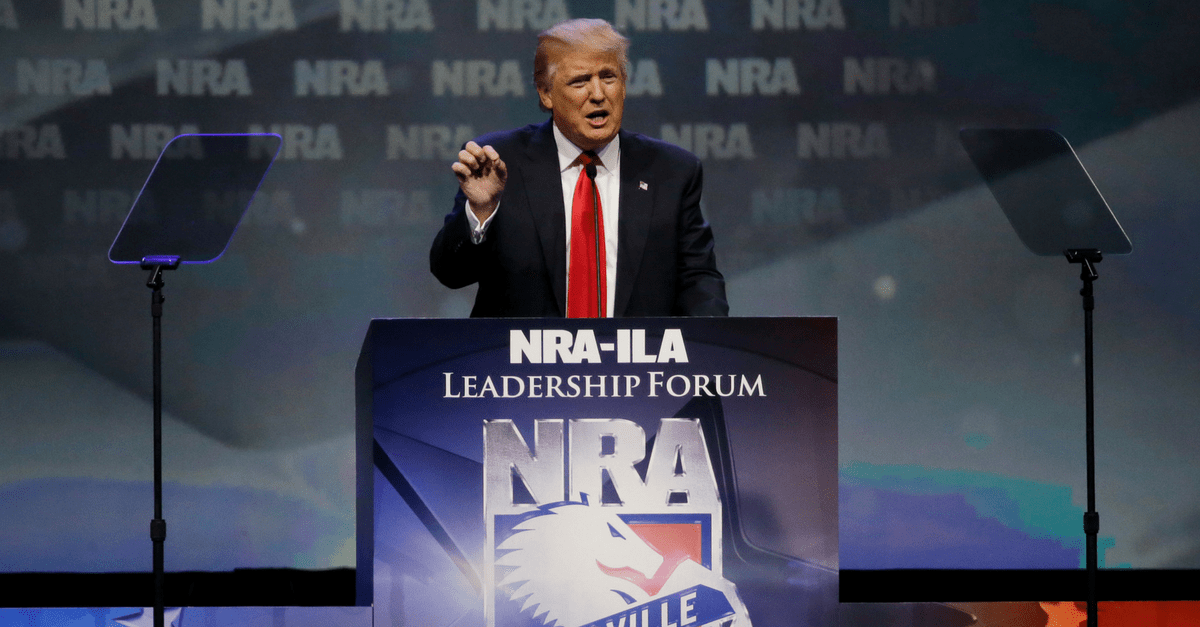 ATLANTA — At the NRA’s Annual Meetings & Exhibits, President Donald Trump took the stage during the event’s Leadership Forum at 12:30 p.m. Friday, April 28, to share his thoughts on gun rights and the future of the Second Amendment, marking the first time a sitting president has done so in 34 years, since late former President Ronald Reagan did so in 1983.

RELATED: The best chart to shut haters up about gun control

This comes as the NRA was one of the few mainstream organizations to endorse then-candidate Trump during the 2016 presidential election due to his commitment to filling late Justice Antonin Scalia’s Supreme Court seat with a conservative justice and his vowing to abolish “gun-free zones.”

“You came through for me, and I am going to come through for you,” Trump said Friday after the crowd chanted “USA” over and over. “I was proud to receive the NRA’s earliest endorsement in the history of the organization, and today, I am also proud to be the first sitting president to address the Leadership Forum since the wonderful Ronald Reagan in 1983.” Find more updates and coverage of President Trump’s NRA appearance here.

RELATED: Trump to meet with NRA on a topic you probably didn’t expect: gun control

The NRA endorsed Trump, and now this is how they feel about his first 100 days in office: During the 2016 presidential election, the National Rifle Association endorsed then-candidate Donald Trump for the White House. On Friday, President Trump returned the favor by speaking at the NRA Annual Meetings & Exhibits to promise NRA members that he’s still on their side. READ MORE

Women gun owners, this young conservative is fighting for your right to defend yourselves on college campuses: At the National Rifle Association Annual Meetings & Exhibits, Antonia Okafor stands out as a conservative woman and a major gun rights advocate who is working to give a voice to female conservatives and gun owners. READ MORE

A passionate President Trump supporter explains how we can work together to Make America Great Again: Hoke Johnson delivered a powerful message about the need for our country to unite behind our new president. “If we work together, we can have a great country, not divided,” he said. “I’ve got just as much chance to make it as anybody else in this world because I want to do right.” READ MORE

A presidential lookalike at the NRA convention had a pretty good idea of what Trump was going to say: While on the ground at the 2017 NRA Annual Meetings & Exhibits, Rare ran into a President Donald Trump lookalike, who was a little hesitant to speak with us out of fear that we might be “fake news.” However, he eventually warmed up to us and had a lot to say about the big event. READ MORE

The full NRA event will take place over the course of four days from April 27-30 and, in addition to the president’s speech, will offer a wide variety of meetings and exhibits, including workshops, seminars, celebrity appearances and more. Featured events include the NRA’s 11th annual auction benefiting the organization’s lobbying arm Institute for Legislative Action, as well as the National Prayer Breakfast, the National NRA Foundation Banquet and the Women’s Leadership Forum Luncheon & Auction, which will feature remarks by keynote speaker and Counselor to the President Kellyanne Conway.

This is why the NRA convention happening now is more than just a gun show: On the ground at the 2017 NRA Annual Meetings & Exhibits, Rare caught up with the NRA’s Media Relations Manager, Jason Brown, who gave us some background on the organization and the annual event. READ MORE

For this self-defense expert at the NRA convention, something is more important than a gun for protection: While the Second Amendment gives us the right to own a firearm for safety, there are many other methods for self protection. READ MORE

Meet Danyela D’Angelo, the 14-year-old girl who is dominating the competitive shooting field: The National Rifle Association Annual Meetings & Exhibits is a big celebration of our Second Amendment right to bear arms, mainly for self protection. However, owning and handling firearms for sport is a huge part of the lifestyle of many gun owners and gun rights advocates. READ MORE

Who is attending the NRA convention?

Celebrity appearances will include those made by Lou Ferrigno, former Army Staff Sergeant Graham Allen, and co-author of “13 Hours: The Inside Account of What Really Happened in Benghazi” Mark “Oz” Geist, among others. Attendees will also be able to enjoy a Saturday night concert with Hank Williams Jr. and the NRA Country Jam, an exclusive event featuring some of the top songwriters from Nashville. Additional confirmed speakers include Sheriff David A. Clarke Jr., Secretary of Interior Ryan Zinke, Senator Ted Cruz and many more.

Country music artist Michael Ray opens up about why the Second Amendment is important to him: For Ray, his support for gun rights stems from his family’s history of protecting and serving their communities. “I was raised around the importance of not only the Second Amendment and owning a weapon for defense and for outdoors, but also the responsibility that comes with that.” READ MORE

As people come to the NRA convention from all over, there are some things they’re looking forward to most: People are gathering from all over the country to attend the 2017 NRA (National Rifle Association) Annual Meetings & Exhibits, running through Sunday. The event will feature not only a series of seminars, workshops, concerts and celebrity appearances, but it also marks the first time a sitting president will address the audience since 1983. READ MORE

Thousands of top vendors from across the country

Meet the shooting sports group that is encouraging women to get comfortable with handling firearms: “My own personal thoughts on women and firearms and our responsibilities are the exact same thoughts I have for men and for anybody else.” READ MORE

Gun owners, ever wondered how to reload your own ammunition? Here’s how! On the floor of the 1500 acre Exhibition Hall at the National Rifle Association Annual Meetings & Exhibits on Friday, April 28, Rare caught up with Hornady Manufacturing, an organization that creates and sells ammunition and bullets. They showed us how to reload your own ammo to save money. READ MORE

Meet Eddie the Eagle, the NRA’s mascot who teaches kids about gun safety in a creative way: The National Rifle Association Annual Meetings & Exhibits is a huge celebration of 2nd Amendment rights, and gun safety is also on everyone’s minds. READ MORE