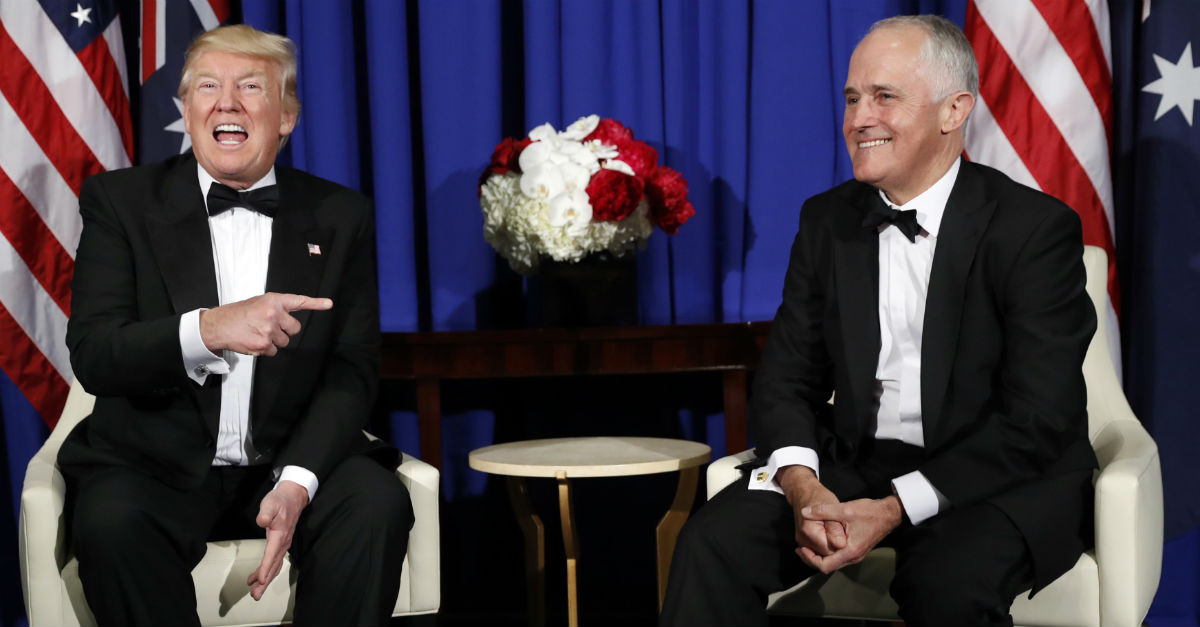 (AP Photo/Pablo Martinez Monsivais, File)
U.S. President Donald Trump, left, meets with Australian Prime Minister Malcolm Turnbull aboard the USS Intrepid, a decommissioned aircraft carrier docked in the Hudson River in New York. Turnbull insisted on Friday, Aug. 4 that his relationship with Trump was "warm," despite transcripts of a heated conversation in which the leaders sparred over a refugee deal. (AP Photo/Pablo Martinez Monsivais, File)

During his latest visit to America, Australian Prime Minister Malcolm Turnbull weighed in on the gun debate raging in America.

Turnbull is spending four days in Washington D.C. where he and top American officials, including President Trump, will discuss the economic relations between the countries. When asked about the ongoing gun debate which has reached a head after the Parkland, Florida shooting, Turnbull told reporters gathered outside the White House “it’s not for me to get involved in a contentious political debate here — but Australia’s experience in gun law reform … is a very powerful demonstration of the success of our policies — and of course they’re often cited in the debate here, but we’ll leave the domestic political debate to the Americans.”

The foreign leader was also asked about the Russian cyber attacks which pose a threat to both nations and he stressed the importance of the American-Australian economic relationship. Turnbull explained “America is our most important economic partner, it’s by far the largest foreign investment in Australia and America is by far the largest destination for Australian foreign investment.”

Gun control advocates often point to the strict firearms laws in Australia as a way to curb violence. The nation cut back on guns more than two decades ago after a mass shooting left 35 people dead. Guns are still available for Aussies, but it’s illegal to sell automatic or semi-automatic rifles and there’s a 28-day waiting period on gun transactions. But the Australian ambassador has said that he does not believe his nation’s laws translate to the United States–just after the Las Vegas massacre, he explained on Twitter “guns are more pervasive and cultural here in USA. We all “wish” for change but it’d be a miracle.”

Thank you to Prime Minister of Australia for telling the truth about our very civil conversation that FAKE NEWS media lied about. Very nice!

Trump and Turnbull seemed to have mended their relationship after they got off to a tense start. In a heated phone call, Trump blasted Turnbull about a refugee agreement that the Obama administration made with Australia. After The Washington Post released a transcript of the call, Turnbull said that he was just “standing up” for Australia and Trump insisted via Twitter that the call was “very civil.”