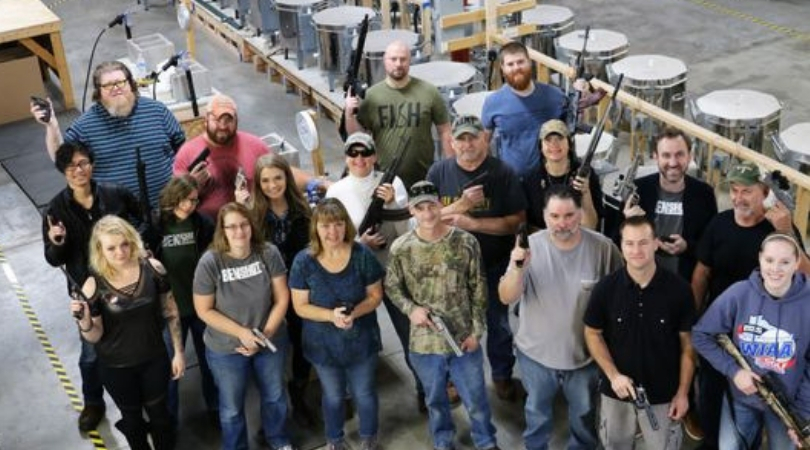 It looks like a company in Wisconsin didn’t get the whole gun control memo, after they decided to give every employee a handgun as a Christmas present. Last year, Ben Shot, a company that produces novelty glassware embedded with a bullet, stated that giving their employees a choice of revolver as a gift is part of an effort to promote team building and personal safety.

The company has 16 full-time employees, including several veterans, and some who have never fired a gun. This is the first time the company decided to give employees a handgun. The father-son business started in 2015 in a small garage workshop in a village of 3,000 residents, 100 miles northwest of Milwaukee.

Several employees were excited about the Christmas gift, and feel that it will empower them and keep them safe. Yet, at least two employees did state they initially declined the gift but considered accepting it after taking a gun safety course that company executives required before gifting the guns.

Celebrate Labor Day weekend the right way!🍻 Use code: LABORDAY18 for 20% off of your order all weekend!🤘 *valid: 8/31-9/3 Use discount on ANY of our products available on the site.🇺🇸🍻👊 LINK IN BIO TO SHOP! — 📷: @myironlife

Employees had the opportunity to choose which type of gun they wanted with a value of up t0 $500. Some chose smaller firearms, while others picked larger ones which allowed to company to have money left over. They decided to buy additional equipment like holsters and ammunition.

It’s no surprise that there has been a heavy national debate about guns recently, especially after the October 27 shooting at a Pittsburgh Synagogue and the November 7 shooting at a bar in Thousand Oaks, California. But, owners stated they weren’t worried about workplace violence since his business has a small staff and all employees know each other well.

Yikes. Welcome to America. Is this even legal?