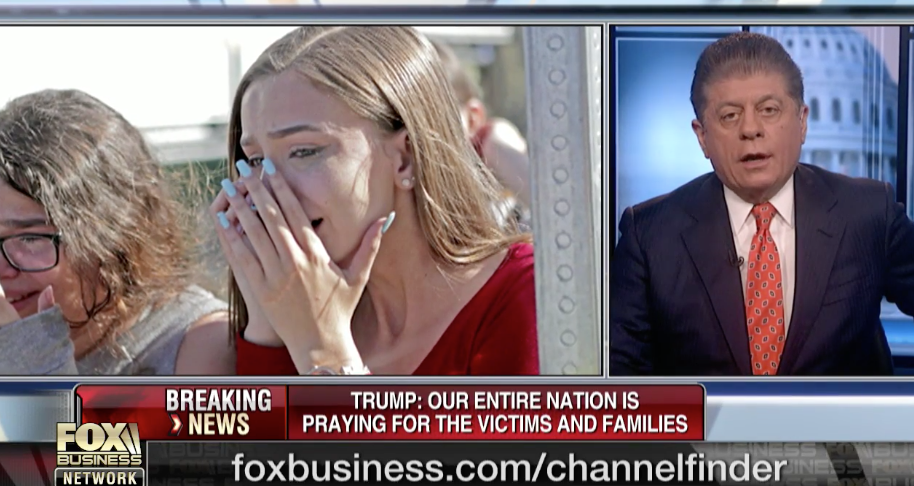 Napolitano believes “superior firepower” is the answer. He weighed in on the discussion when the panel brought up background checks and how the Florida killer was able to buy an AR-15 legally.

?Suggesting this is a mental health issue is a diversion,” Napolitano said to show host Bret Baier. ?It?s an issue of not enough superior firepower to stop these killers. If he?s crazy, he?s going to find a way to kill. If he?s irrational and wants to kill, he will find a way to kill.?

?You can?t keep a lunatic from wanting to kill somebody,? Napolitano said. ?The only way to stop this is by superior fire power.?

On the panel, Baier jumped in to say that there are 300 million guns in America. Napolitano responded that there aren’t guns in schools, saying, ?They?re like a sitting duck.?

A former student at the high school, 19-year-old Nikolas Cruz, is accused of killing 17 people with the semi-automatic firearm after he entered Marjory Stoneman Douglas High School.

The shooting is the 25th most fatal shooting at a U.S. school since?and including?the 1999 Columbine High School massacre in which 15 people were killed.
This latest mass murder has sparked louder calls for Congress to act on gun control. However, Axios’ Jonathan Swan told the panel that a senior White House official told him that it isn’t realistic for the government to begin buying back guns because of the sheer number of them out there.
He said gun control likely won’t be coming anytime soon.
?I don?t see this heading in a gun control direction,? Swan said.
Advertisement