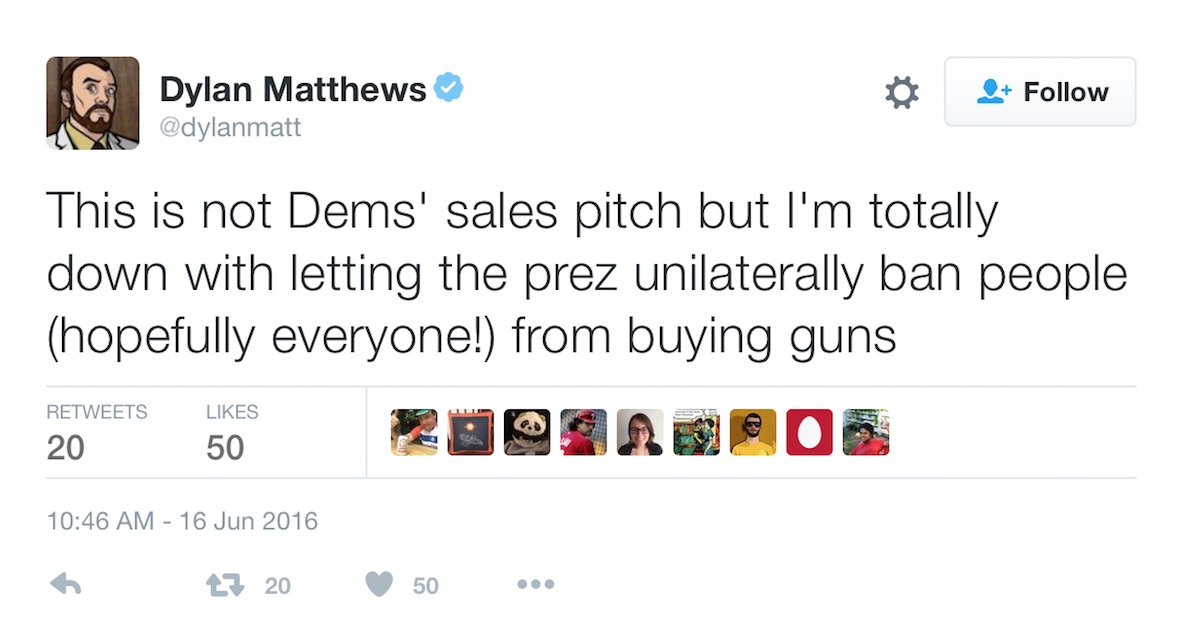 Since the Orlando terrorist attack, gun control, as has been the case after other mass shootings like Sandy Hook and San Bernardino, is being called for by many, but few have suggested what Vox writer Dylan Matthews did Thursday on Twitter.

This is not Dems' sales pitch but I'm totally down with letting the prez unilaterally ban people (hopefully everyone!) from buying guns

“This is not Dems’ sales pitch but I’m totally down with letting prez unilaterally ban people (hopefully everyone!) from buying guns,” he tweeted.

For the record, the Democrat sales pitch has been to expand background checks and prevent people on the FBI terror watch list from buying firearms.

One response to Matthews’ tweet completely shut down the argument, and here’s why.

So when President Trump puts you on a list, @dylanmatt, he can remove whatever constitutional rights he pleases?

It’s an interesting response because it shows that the suggested unilateral action by the president would not be tolerated if the situation were reversed.

Let’s imagine for a moment that President Obama does what Matthews hopes, and then Donald Trump becomes the next President of the United States. Let’s imagine Trump unilaterally states that every adult American must own a gun. The problems with unchecked executive power become clear.

This is kind of a creepy totalitarian view, @dylanmatt. And I don't think you'd consider that characterization a criticism.

RELATED: No one in the media appears to agree on what type of rifle was used in the Orlando massacre

This is why the separation of powers exist, to prevent precedents like these from happening on the whim of one person.

That aside, the tweet does nothing to address the fact that there are more than 300 million guns — that we know of — in America right now. Matthews doesn’t specify if, by his logic, these guns would be grandfathered in or flat-out confiscated.

If not the latter, what is the point of banning people from buying guns?