America wins by fighting for Dreamers, but we can’t stop there 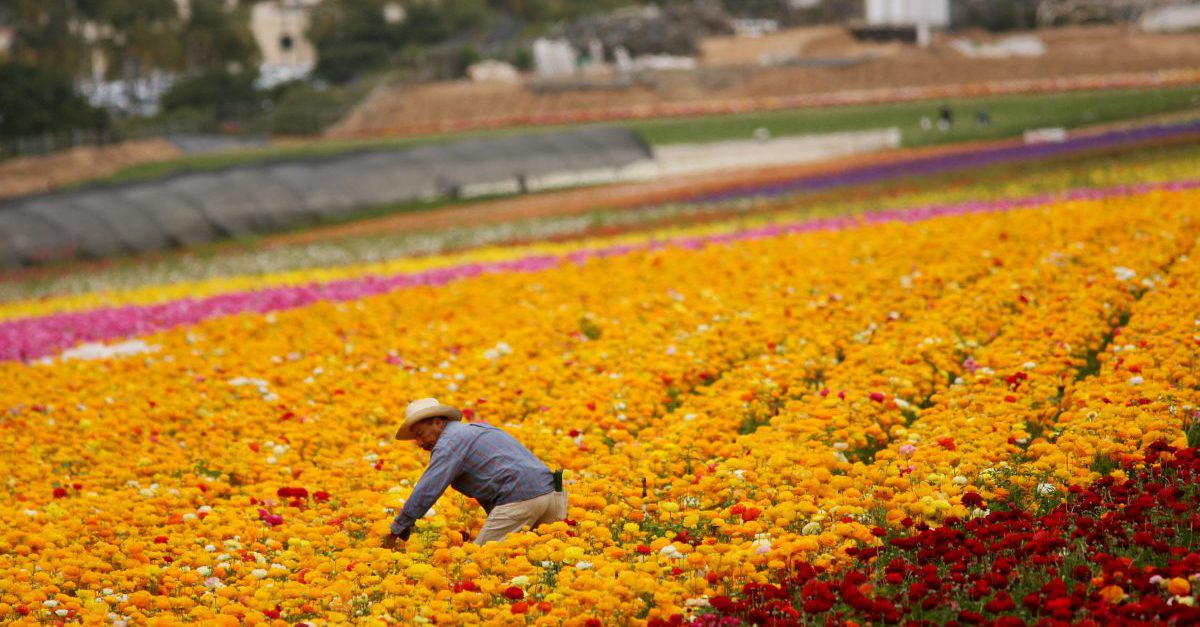 Photo by Sandy Huffaker/Getty Images
CARLSBAD, CA - APRIL 28: A Hispanic farmworker harvests Ranunculus bulbs at the Flower Fields April 28, 2006 in Carlsbad, California. The debate in Washington continues over whether to create a temporary guest-worker program for immigrants wishing to find work in the United States. (Photo by Sandy Huffaker/Getty Images)

President Donald Trump has announced that he is going to end the Deferred Action for Childhood Arrivals (DACA) in six months, unless Congress can create a more permanent solution for so-called “Dreamers.” DACA allows immigrants who entered the country as minors to receive a deferred action from deportation and receive a work permit.

Trump’s strict six-month deadline has created panic for those who want to save it. And DACA should be saved. Dreamers have been raised in the U.S. and those currently enrolled in DACA are in school, have graduated, or have served in the military and have no criminal record. They are — by definition — model citizens.

The last 30 years of immigration policy has dealt primarily with the population currently living in the United States and often promises tightening of the borders. In 1986, The Immigration Reform and Control Act (IRCA) led to the legalization of 2.7 million immigrants. But IRCA also came with some constraints. It made it illegal for employers to knowingly hire undocumented workers, and it increased the number of border patrol agents by 50 percent.

IRCA made no real changes to the immigration process. Years later, the United States would find itself in the same situation. In 2007, the number of undocumented immigrants rose to 12.2 million from the estimated five million in 1986, proving that President Ronald Reagan’s amnesty program was only a Band Aid.

DACA faces similar challenges. Born out of the inability to pass the DREAM Act during the Obama administration, DACA was Obama’s hail mary for a more compassionate immigration reform. However, DACA is really only “delayed action” for Dreamers. It offers no path to citizenship and completely ignores a large population of the immigrant community, those who were not brought here as children.

Now is the time to learn from our past mistakes. Dreamers should be offered a clear path to citizenship, but we also need to make a simpler process for those who want to come to the United States.

The immigration process is convoluted and takes years. There is no real way for low-skilled workers to enter the country legally and currently the only visa for low-skilled workers is capped at 5,000 per year. The prospects for high-skilled workers are not that much better. Only about 2,000-3,000 people from a single country can immigrate in an employment-based category. One study estimates that for a country like India, the wait could be as long as 70 years to receive an employment-based green card. For those who want or need to enter the United States as soon as possible, the easier route is to enter the U.S. without permission.

This is how difficult it is for many to immigrate to the U.S. legally. On the flipside, this notion of wiping the slate clean with mass deportations is also not as simple as it sounds.

In 2016, roughly 450,000 people were deported and each deportation costs an average of $10,854. With 11.3 million undocumented people currently in the United States, the cost to the American taxpayer would be astronomical to deport that entire population. The resource problem doesn’t end there; the average length of detention for a deportee is 30 days. Deportees can be sent to an ICE detention center or another public or private prison that works with ICE. ICE is required to fill 34,000 beds per night with detainees. When there are families involved, special resources need to be provided for school-age children. But it doesn’t have to be this way. If we want to end illegal immigration, we can make legal immigration easier.

RARE POV: Deporting illegal immigrants with no criminal record is an attack on justice, family and common sense

Immigrants provide countless benefits to the U.S. and their fellow Americans. A 2016 study  by the National Foundation for American Policy shows that more than half of startups valued at $1 billion or more were started by immigrants. Another study from 2014 shows that immigrants, who make up 13 percent of the population, contribute 15 percent of economic output. There is so much to gain from simplifying the immigration process.

So, yes, let’s fight to save DACA, but let’s continue to fight for all immigrants. Let’s not take the mentality that we must save DACA no matter the trade-off. Until we deal with the forces behind the undocumented immigrant population, we will be facing the same issue in another 30 years. We need a simpler immigration system, one that doesn’t rely on increased border security or Trump’s wall.

Now is the time to stand up for all immigrants. The ones who have been working hard and improving their communities — albeit under the radar. The ones who haven’t made it to our country yet and face years of waiting in a line that doesn’t exist.

Adriana Vazquez is a Young Voices Advocate, currently living in the Bay Area. Follow her on Twitter @vazquezadriana.