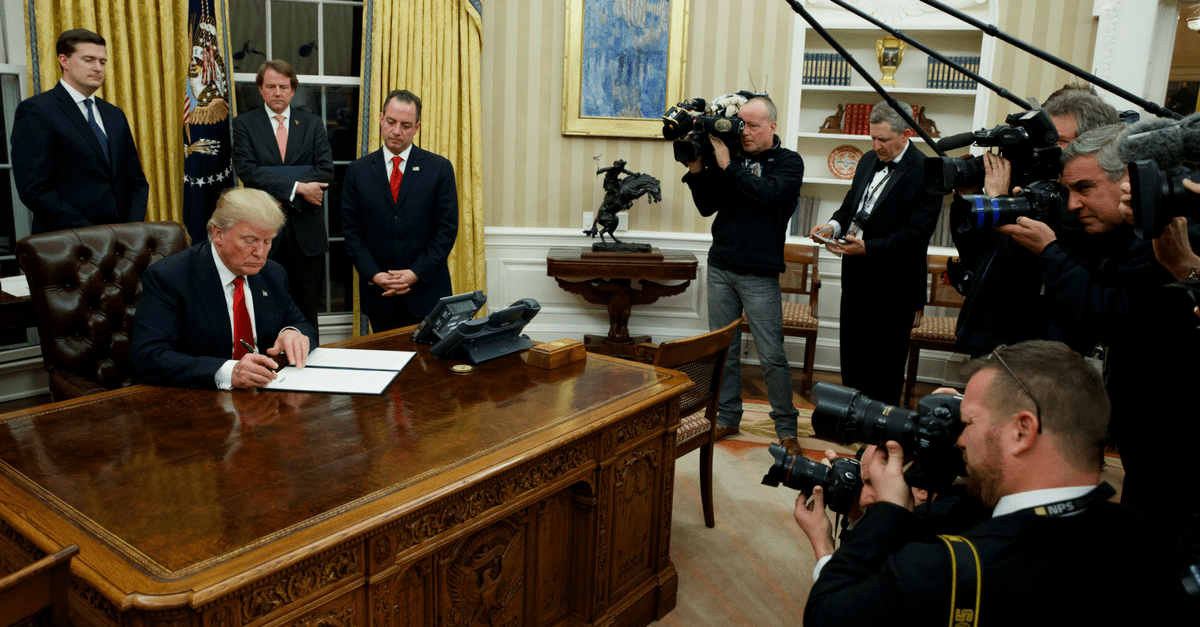 After endless weird controversies, Donald Trump seemed to have finally tied a bow around last week. He had what by all accounts was a friendly huddle with British Prime Minister Theresa May, managed to make it through the subsequent press conference without getting the country invaded, and even scored a bonus when the polished Mike Pence gave an excellent speech at the March for Life, setting up the once-unfathomable spectacle of Christian demonstrators cheering for…The Donald.

And then he decided to blow everything up. The dynamite was an executive order that he signed on Friday banning all refugees from entering the United States for 120 days and prohibiting those from Syria indefinitely. Visitors from seven countries—Iran, Iraq, Libya, Somalia, Sudan, Syria, and Yemen—are barred for 90 days. All of this so the government can scrutinize the refugee and immigration processes and submit recommendations to make it safer. Incredibly, the initial order blocked all green card holders who have permanent residence in America until Trump made a U-turn on Sunday.

The reaction was swift and fierce: confusion among travelers, fear among settled refugees, massive protests at airports across the country, international condemnation (even Trump’s new prom chaperone Theresa May isn’t onboard), a federal judge staying the government from deporting anyone until the ban can be reviewed.

I don’t know if Trump’s order is legal or not—there are many components to it and I’ve heard bright minds go both ways—but I do know this: as far as policy goes, it’s a poorly considered and hastily constructed dud.

RELATED: Two girls can barely hold back tears as they wait to find out if their Iraqi mother will be allowed into the United States

Start with the list of countries from which we can no longer receive visitors. The aforementioned seven nations were lifted from a previous law signed by Barack Obama in 2015, most likely so Trump could point the finger tauntingly at his predecessor when controversy arose. The problem is that, if you’re looking to prevent terrorist attacks inside the United States, the list is woefully incomplete.

Why is our great and glorious ally Saudi Arabia not included, when a majority of the 9/11 hijackers were Saudi and Riyadh has long bankrolled Sunni extremism across the Middle East, including al-Qaeda’s former affiliate in Syria? What about the rest of the Gulf States—Qatar’s support for hardline Islamists is in some respects even more blatant than Saudi Arabia’s? What about Tunisia, a veritable pipeline of ISIS terrorists? How about Pakistan, which produced the two San Bernardino shooters? Why not Afghanistan, which gave us the terrorist behind last year’s bomb detonations in New York and New Jersey?

Iran’s inclusion on the list makes no sense, given that no Iranian national has ever successfully perpetrated an attack inside the United States and Tehran is helping us fight the Islamic State. Iran has since began pondering a reciprocal ban on American travelers and the valuable nuclear deal struck by President Obama with President Rouhani is looking increasingly prone to fray.

Even provided there was some coherence to the nations we were banning, the greater policy is still insensible. We haven’t suffered a single successful attack by a Muslim refugee in history. Not one recent terrorist incident would have been prevented by Trump’s order. This ban doesn’t come off as a practical response to a real problem so much as the boisterous fulfillment of a campaign promise, rushed through without sufficient consideration, intended more as fodder for Trump’s supporters and nyah-nyah towards his opponents than serious policy, a haphazard and slapdash solution to a non-problem. For those of us hoping that Trump will repeal Obamacare only after carefully assembling an alternative that ensures the health care market doesn’t get wrecked, it’s not an encouraging sign.

I’ll grant Trump this much: the order isn’t as egregious as left-wing protesters seem to think. Its provisions are temporary, there is generous leeway for exceptions, and Trump himself has emphatically insisted it isn’t the Muslim ban he promised during his campaign, which, if you think about it, makes him kind of a cuck. But it is still a serious change, one that was guaranteed to be a flashpoint, one that doesn’t seem worth the outrage.