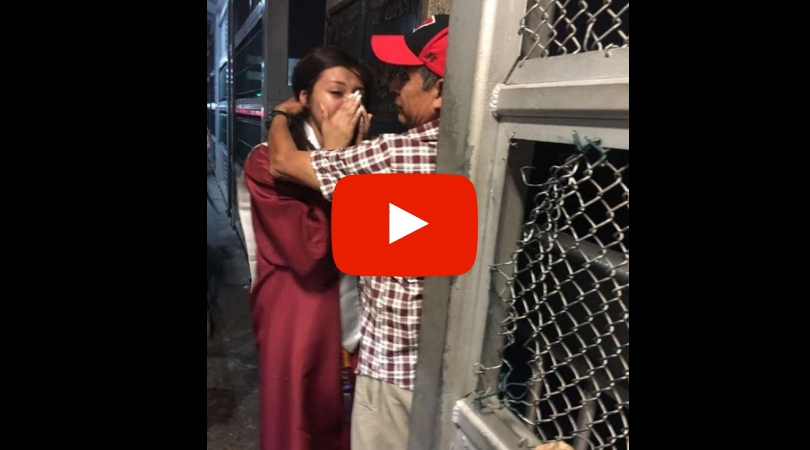 It was an emotional day for Sarai Ruiz and her father after they reunited hours after her graduation ceremony in the middle of the Laredo International Bridge. Ruiz uploaded a video to her Facebook explaining how her father, Estaban Ruiz, couldn’t attend her graduation since he was deported when she was just 4 years old while living with her mother in Wisconsin.

When Ruiz turned 7, she moved with her mother to Nuevo Laredo, Mexico, to be closer to her father. Although she lived in Nuevo Laredo, she decided to attend Hector J. Garcia High School in Laredo, Texas, crossing the U.S.-Mexico bridge every day for four years. She successfully graduated on May 24, 2018, becoming the first member of her family to graduate from high school.

Since her father was unable to step onto U.S. soil to attend her ceremony, she brought the ceremony to him instead and went to where the two countries meet. Ruiz’s video shows her anxiously walking towards her father dressed in her cap and gown, along with the medals she received for her achievements, collapsing in the arms of her “papa” as soon as she saw him.

The emotional gesture captivated the hearts of many social media users, praising the student and congratulating her for her achievements. Her Facebook post, which has more than 2.5 million views, explained how she wanted her father to see how hard she worked for her diploma, dedicating her achievements to him. Her post read,

“I tried so hard not to cry when we salute our parents knowing that only my mom was there. I knew my father would never see me walk to get my diploma but today, I thought I?d surprise him by crossing the bridge so he could see me with my cap and gown. I have to say that all my life I wondered if my dad would ever see me graduate? it started as not seeing him on Father?s Day then it continued to be a spiral of downhill emotions where I would only see him once a year and then things changed I moved to Laredo..and I got to see him every weekend..we bought a house and now I?d see him everyday..today I can say that although we may have lost father and daughter time..I will always be grateful for his sacrifice to put his life at risk many times just to see me again.. gracias por todo papá.?

More than over 9,000 users have reacted to the video, which has inspired several people on the border to share their own stories of families separated by the U.S.-Mexico border as well. Ruiz told Laredo Morning Times she will be attending the University of Texas at Austin to study psychology and government. Although she worries that living in another city will prevent her from seeing her father as often as she would like, she said her mother always told her to follow her dreams, since they will always be behind her every step of the way.